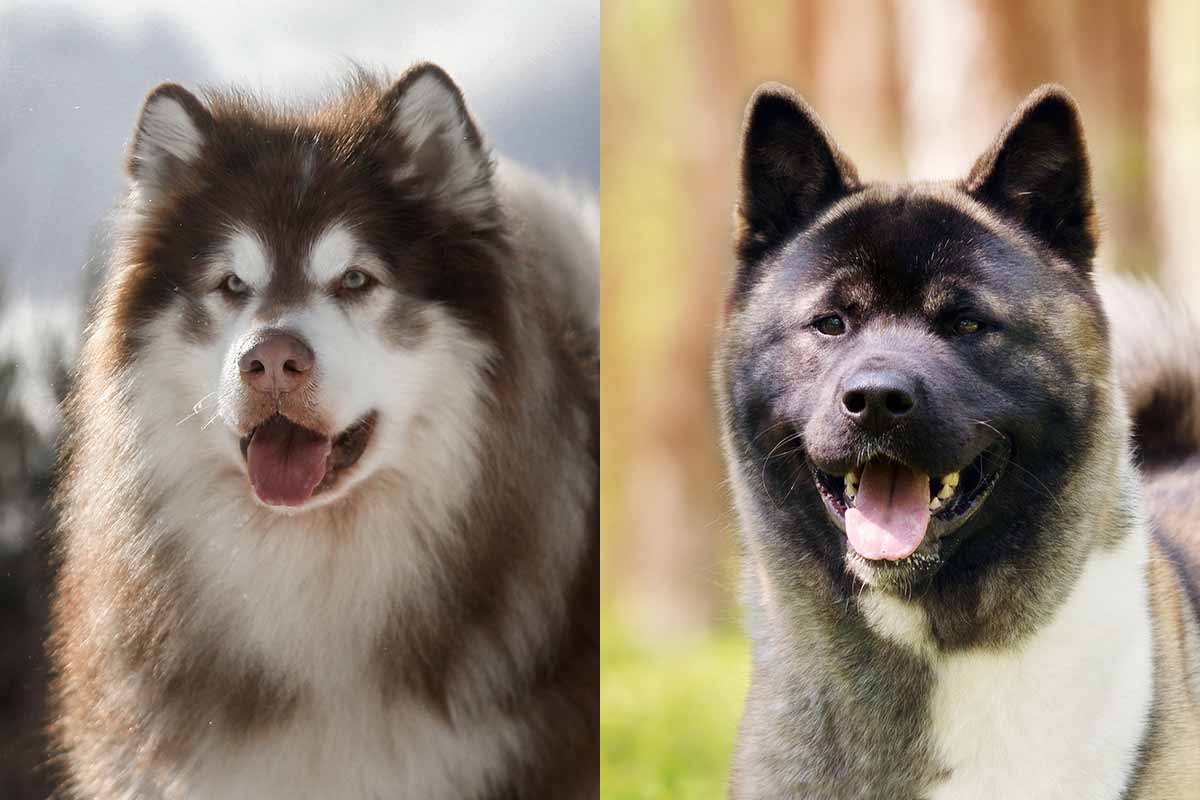 By Kieran Beckles
Updated on 30 September 2022

Have you been getting Alaskan Malamutes and Akitas confused?

They’re two examples of big dogs with a rich history before establishing themselves as recognised dog breeds.

Alaskan Malamutes and Akitas are both breeds recognised by the American Kennel Club and the Kennel Club in the United Kingdom.

Alaskan Malamutes are thought to be descendants of the first domesticated wolf dogs.

It’s worth nothing that the Akita has two different versions – the American Akita and the Japanese Akita.

In this article, we’re going to take a look at all things Alaskan Malamute and Akita, including appearance, temperament, life expectancy, price and much more.

Let’s get started on our Alaskan Malamute vs Akita comparison article. 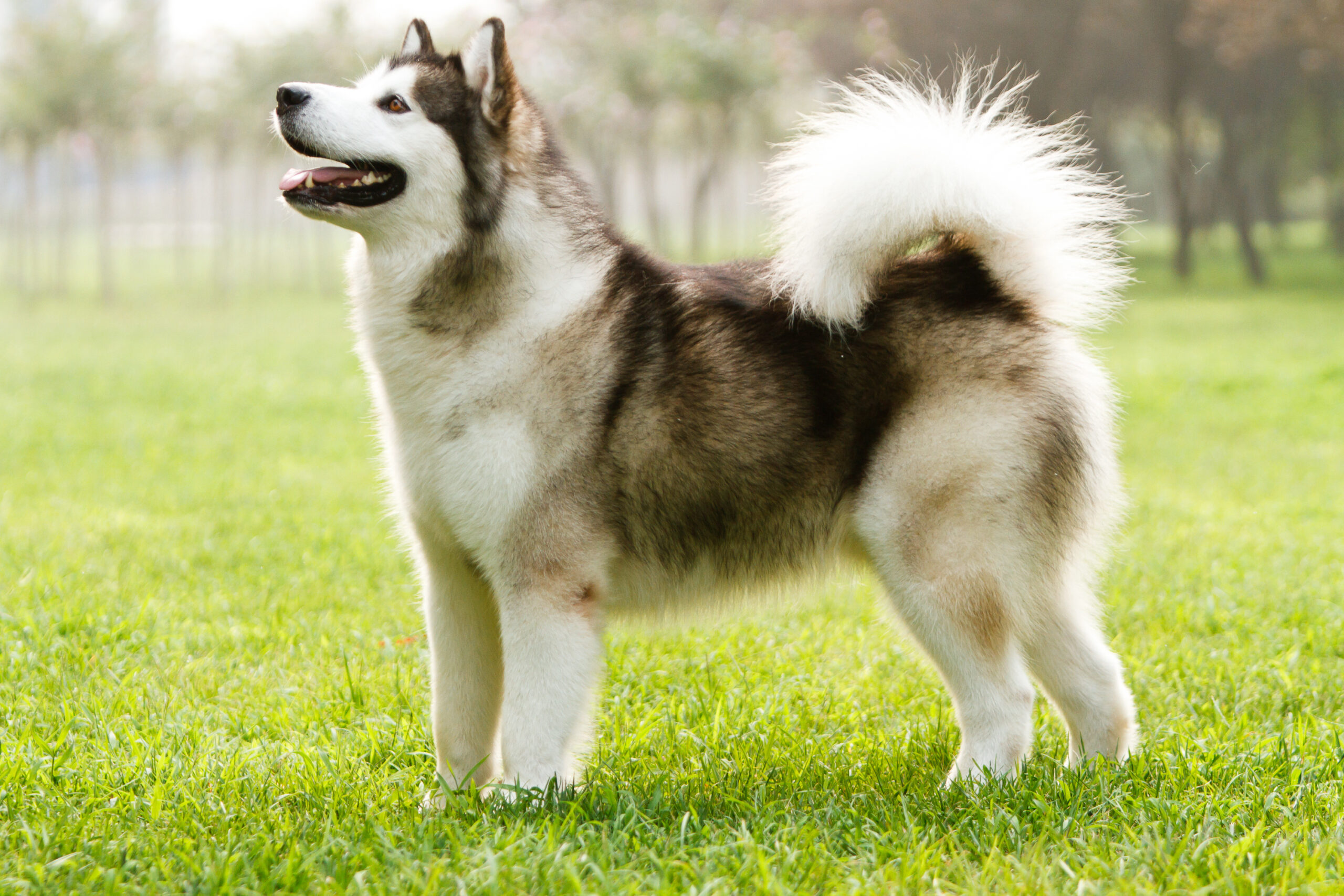 The Alaskan Malamute are affectionate, loyal and playful dogs that are a member of the Working Group. They’ve recognised by the American Kennel Club since 1935. At the time of writing, the Alaskan Malamute is the 68th most-popular dog breed in the USA.

What Is An Akita? 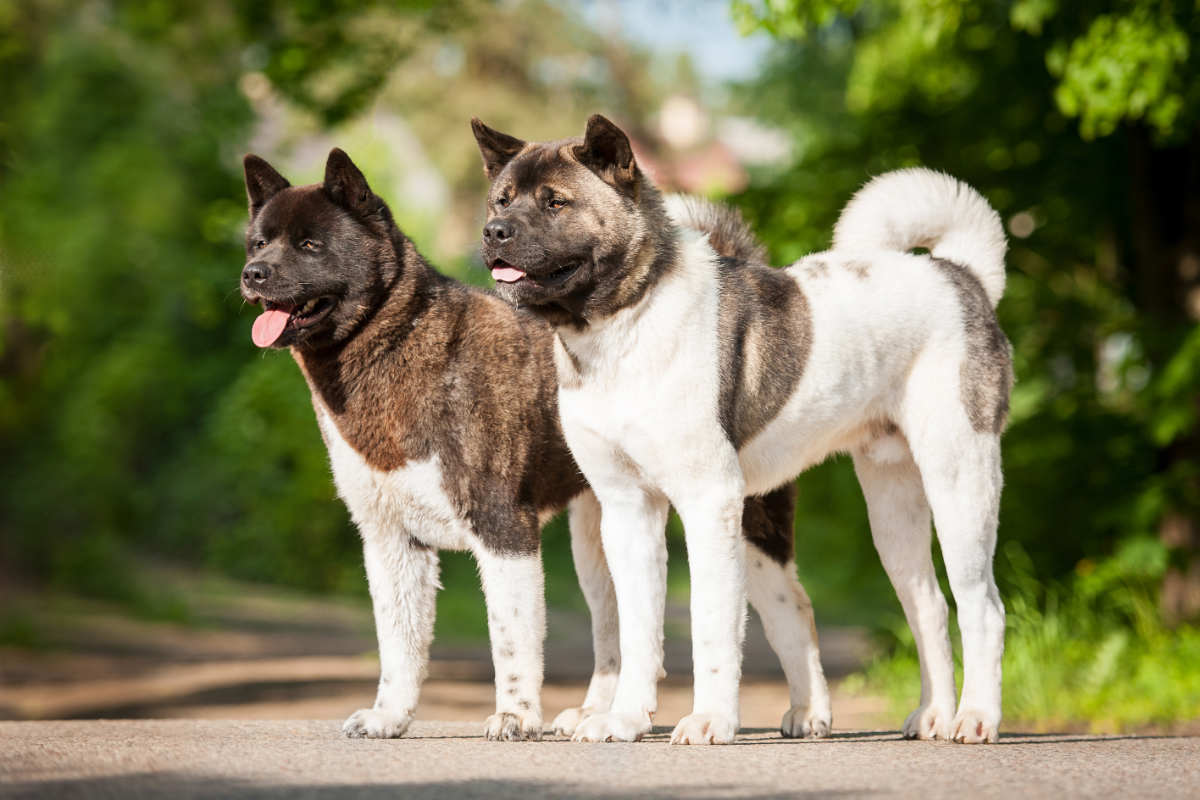 Akita are courageous, dignified and profoundly loyal dogs that are members of the AKC’s Working Group just like the Alaskan Malamute. The Akita was recognised by the AKC in 1972. They’re the 52nd most-popular dog breed as of 2021. 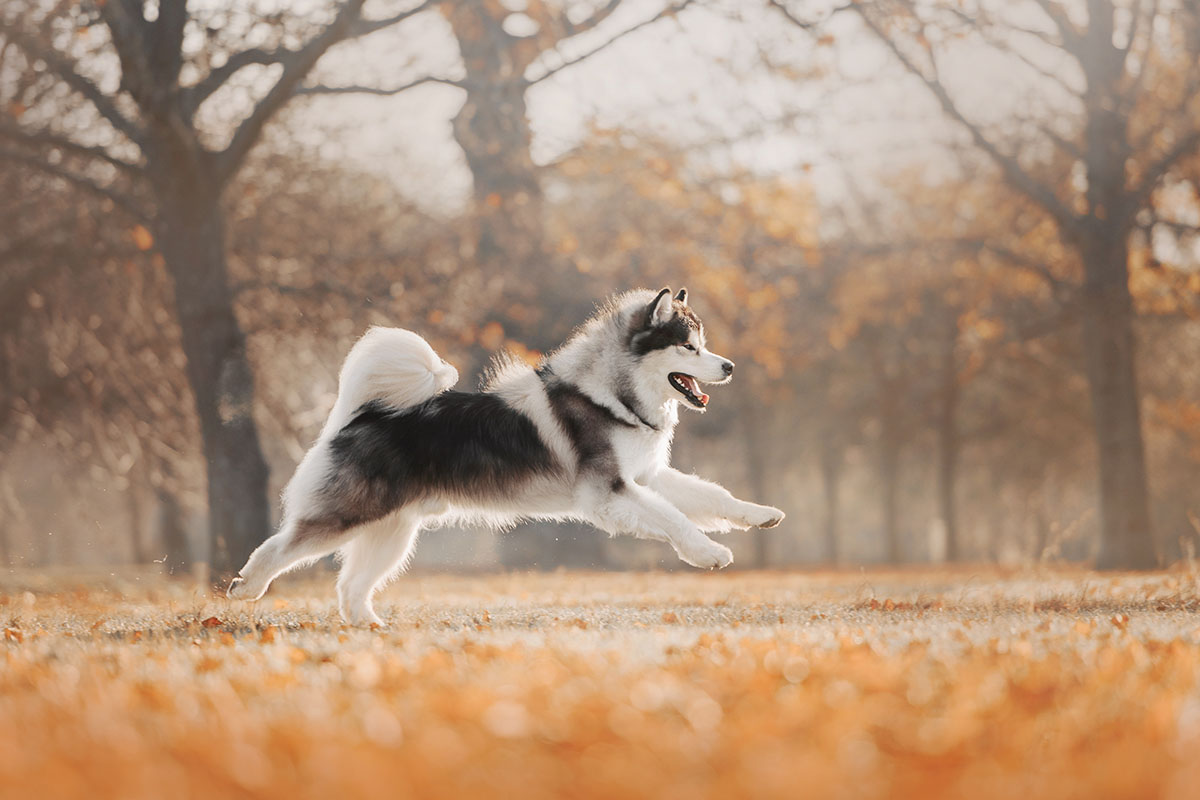 The AKC describe the Alaskan Malamute as one of the oldest sled dog breeds of the Arctic. Like we mentioned in the introduction, Alaskan Malamutes are thought to be descendants of the domesticated wolf-dogs who accompanied Paleolithic hunters.

The Malamute gained more notoriety at the start of the 20th century as superb freighters unlike the Siberian Husky breed, who were preferred for sled racing. The AKC granted the Alaskan Malamute breed status in 1935. It’s important to note that there are three different Alaskan Malamute strains – Kotzebue, M’Loot and Hinman.

Where Do Akita Come From? 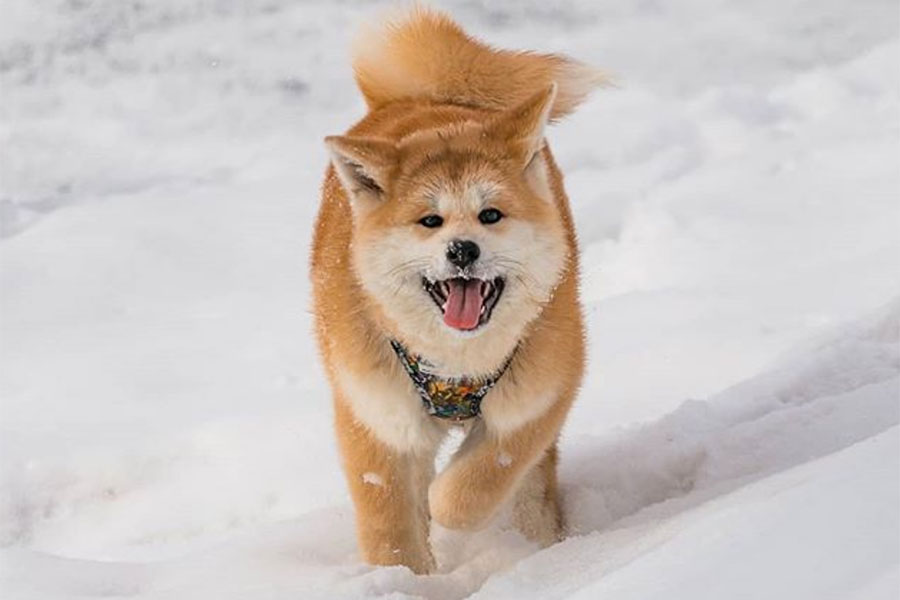 Akita have a rich history in Japan before their popularity spread throughout the world. The AKC explain that the Akita breed is famous for their dignity, courage and loyalty. Akita are considered imperious protectors of the family and the home.

The Akita breed was first developed in the early 17th century. Developed by an exiled nobleman, this Akita-loving aristocrat set about looking to create a powerful hunters with a superb work ethic and unwavering loyal temperament. The original Akita were used to hunt big game such as wold boars, deer and bears.

While the Akita breed’s numbers of fluctuated over the past couple of centuries, the first Akita breed club was founded in 1927. The first Akita arrived in the USA via a lady called Helen Keller. Their popularity stateside soared after World War 2 when soldiers returned from the fighting in the Pacific. The AKC recognised the Akita in 1972. 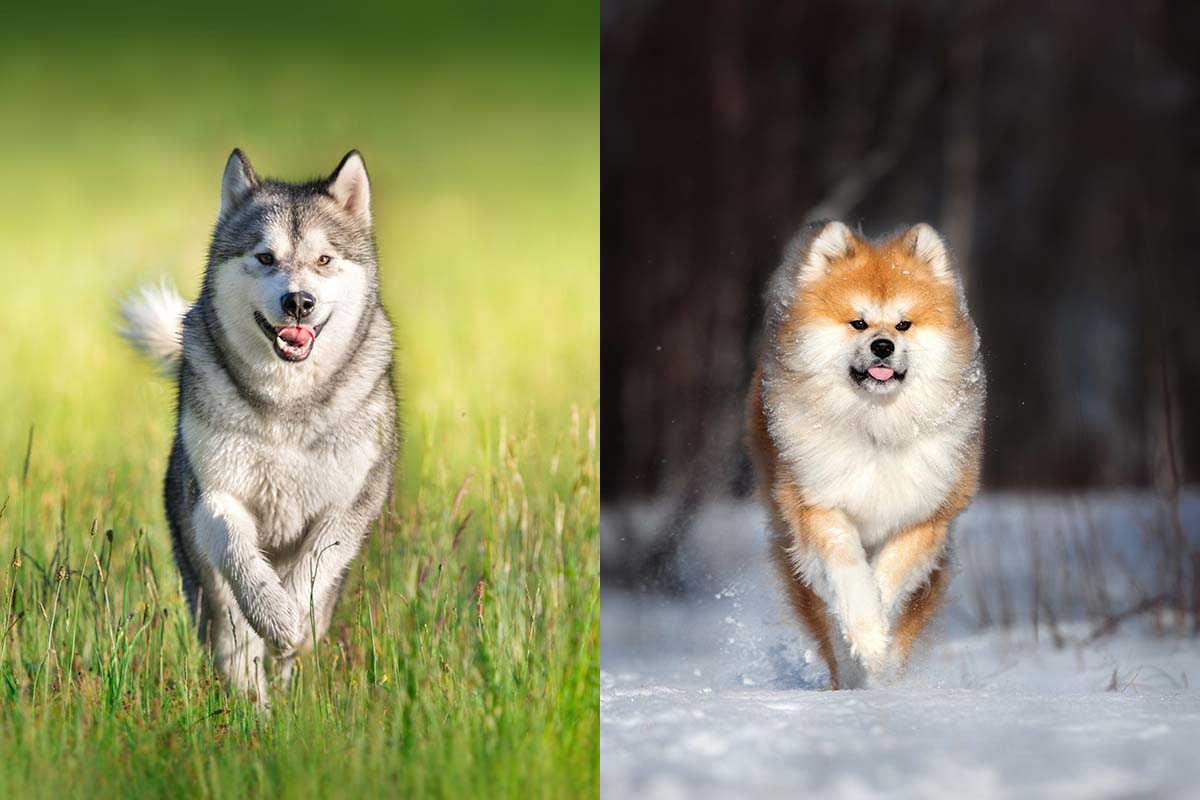 Alaskan Malamutes have an average size of 23 to 25 inches and can weigh between 75 and 85 pounds. Akita can be ever-so slightly taller with an average height range of 24 and 28 inches, while they tend to be heavier with a weight range of 70 to 130 pounds.

What Is Bigger: Alaskan Malamute Or Akita? 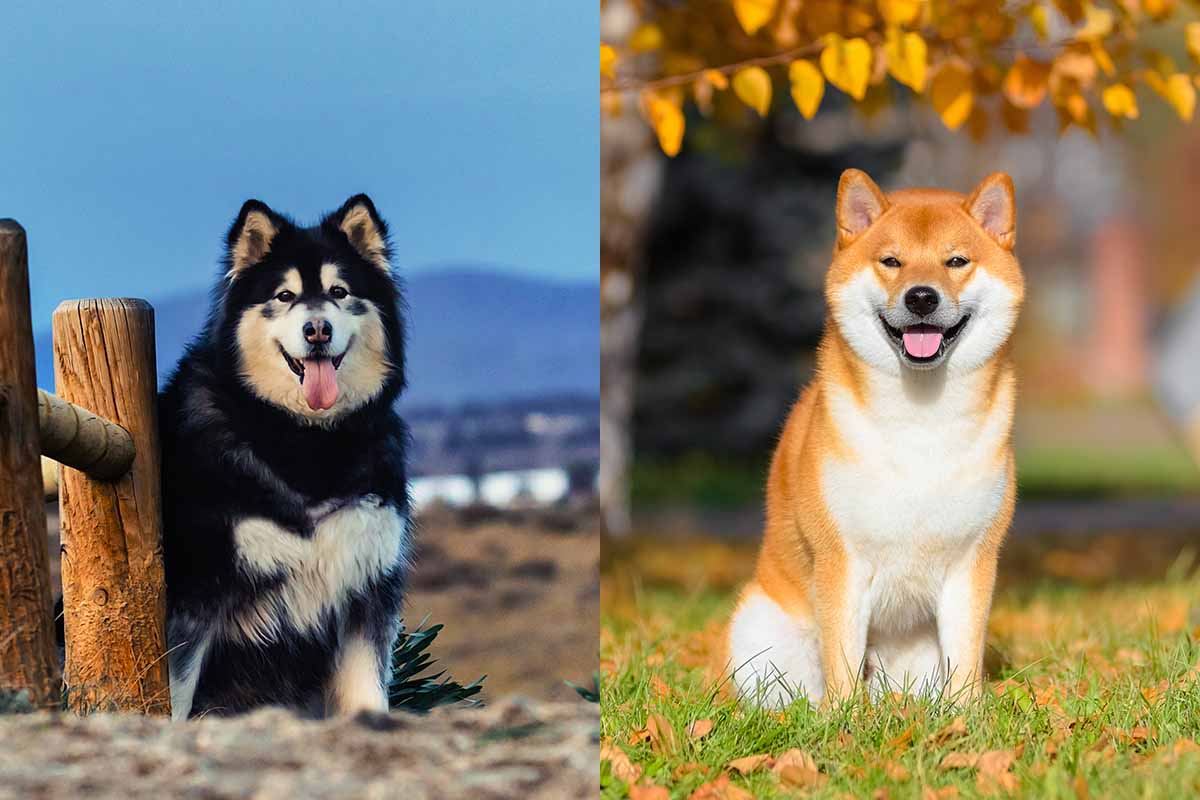 Alaskan Malamutes have an easily identifiable double coat – a dense under coat to keep them warm and a coarse outer coat to protect against the elements. They’ve got a range of potential coat colors, such as gray and white, sable and white, black and white, seal and white, red and white or solid white. They’ll usually have brown eyes with a striking mask unless they’re solid white. Overall, they’ve got a striking but compact appearance.

Let’s take a look at the breed standard’s definition of appearance:

The Alaskan Malamute, one of the oldest Arctic sled dogs, is a powerful and substantially built dog with a deep chest and strong, well-muscled body. The Malamute stands well over the pads, and this stance gives the appearance of much activity and a proud carriage, with head erect and eyes alert showing interest and curiosity. The head is broad. Ears are triangular and erect when alerted. The muzzle is bulky, only slight diminishing in width from root to nose. The muzzle is not pointed or long, yet not stubby. The coat is thick with a coarse guard coat of sufficient length to protect a woolly undercoat.

Akita can look different depending on whether we’re examining the American or Japanese versions of the breed. The American Akita can have a black, white, chocolate coat or a combination of the aforementioned colors with white. You can also get a brindle-coloured American Akita. The Japanese Akita will typically have a red and white coat but can also have markings such as fawn, sesame, brindle, and pure white, all with urajiro markings. They’ve got an intimidating appearance with their heavy-set bones, bear-like head with erect ears.

The AKC breed standard for Akitas has the following to say on appearance: 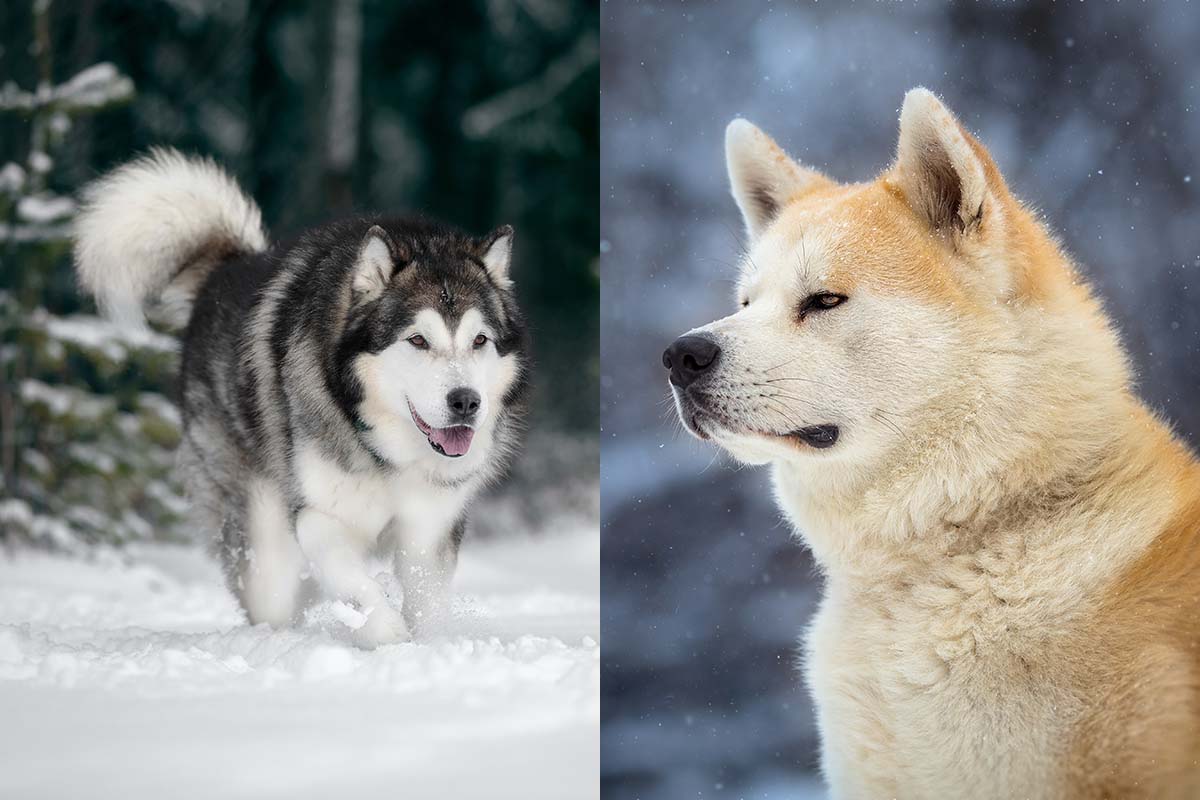 Alaskan Malamutes are affectionate, playful and sociable but are willing to knuckle down to do some hard work. They’re friendly with everyone they meet, whether it’s a family member, a stranger at the dog park or a new dog. Seeing as the Alaskan Malamute ancestors were key members of the pack, it’s hardly surprising that Alaskan Malamutes love to be surrounded by their family. It’s a good idea to commit to training at a young age so you can ensure your Alaskan Malamute is obedient. If you can’t control these big dogs with your words, life could quickly become difficult. Alaskan Malamutes don’t tend to bark a lot but they will make an “awoo” sound.

The AKC have the following to say on Alaskan Malamute temperament.

The Alaskan Malamute is an affectionate, friendly dog, not a “one man” dog. He is a loyal, devoted companion, playful in invitation, but generally impressive by his dignity after maturity.

The Akita breed are usually described as being dignified, courageous and loyal. In Japan, the Akita was considered the ultimate guardian and protector of the family. So if you bring home an Akita, you’ll have a dog with an undying love for their fellow family members. Although Akitas were traditionally used as hunters, they are remarkably quiet dogs that don’t raise the alarm unless it’s necessary. They like to keep themselves clean so Akitas are an example of a fastidious breed. Unlike the Alaskan Malamute, Akitas are reserved and wary of strangers or other pets. The AKC explain that Akitas tend to reserve their funny, quirky side for family only. Akitas require lots of socialization and training from a young age – and throughout their lives.

The Kennel Club provided a brief summary of Akita temperament.

Dignified, courageous, aloof; tends to show dominance over other dogs, though the trait is not encouraged. 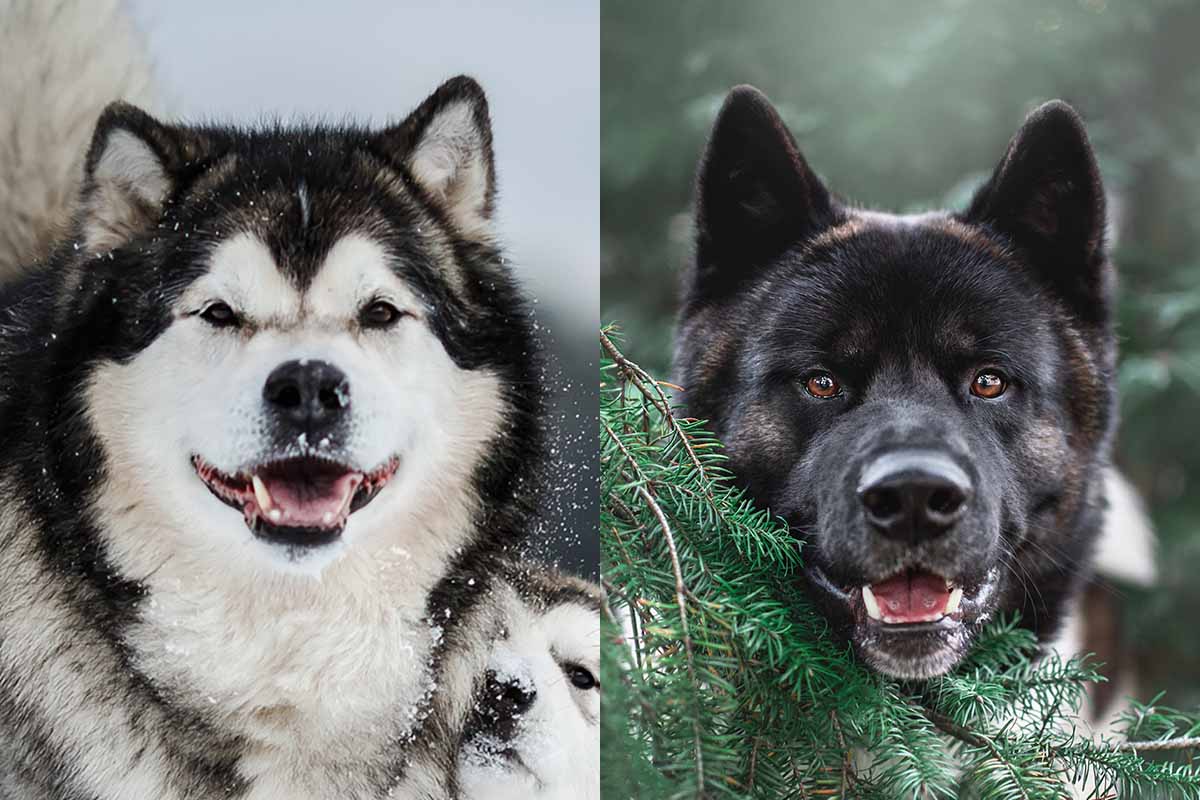 Alaskan Malamutes will require quite a bit of exercise seeing as these dogs are used to working. You can stick to traditional ways of exercising your Malamute such as going for a long walk or playing in the garden. However, your Mal will relish a challenging hike, going for a swim in safe conditions and even running alongside their owners. Wag Walking recommend around 60 minutes of exercise a day for Alaskan Malamutes. The AKC suggest that Malamute owners consider agility and obedience trials, weight-pulling competitions, backpacking, recreational or competitive sledding and skijoring for the breed.

The Akita doesn’t have quite the same exercise demands despite being bigger than the Alaskan Malamute and traditionally a working breed used for hints. The AKC suggest a brisk walk or short jog could even be sufficient for the breed. However, they’re smart dogs so you’ll find that Akitas need sufficient mental stimulation to prevent unwanted destructive or negative behaviours. As a breed accustomed to the cold like Malamutes, Akitas could enjoy a hike in the mountains. While the AKC appear to play down the exercise needs of Akitas, Wag Walking suggest 60 minutes of activity a day.

Neither the Alaskan Malamute nor the Akita are hypoallergenic dogs so if you’re looking for a breed that is less likely to trigger your allergies to dogs, these probably aren’t the right breeds for you.

Alaskan Malamutes will shed all year round but blow their undercoat at least twice a year at the changing of the seasons. You’ll need to brush your Malamute at least a couple of times a week if not more. Malamutes are fasitidious so they like to clean themselves as if they’re cats. Having said that, they’ll still need a bath every few months to keep them clean.

Akitas are also fastidious like Malamutes so they’ll often clean themselves. These Asian dogs will be moderate shedders so they need a brush at least two or three times a week. They’ll shed more heavily two to three times a year. Although Akitas like to keep themselves clean, they’ll need a bath every few months. 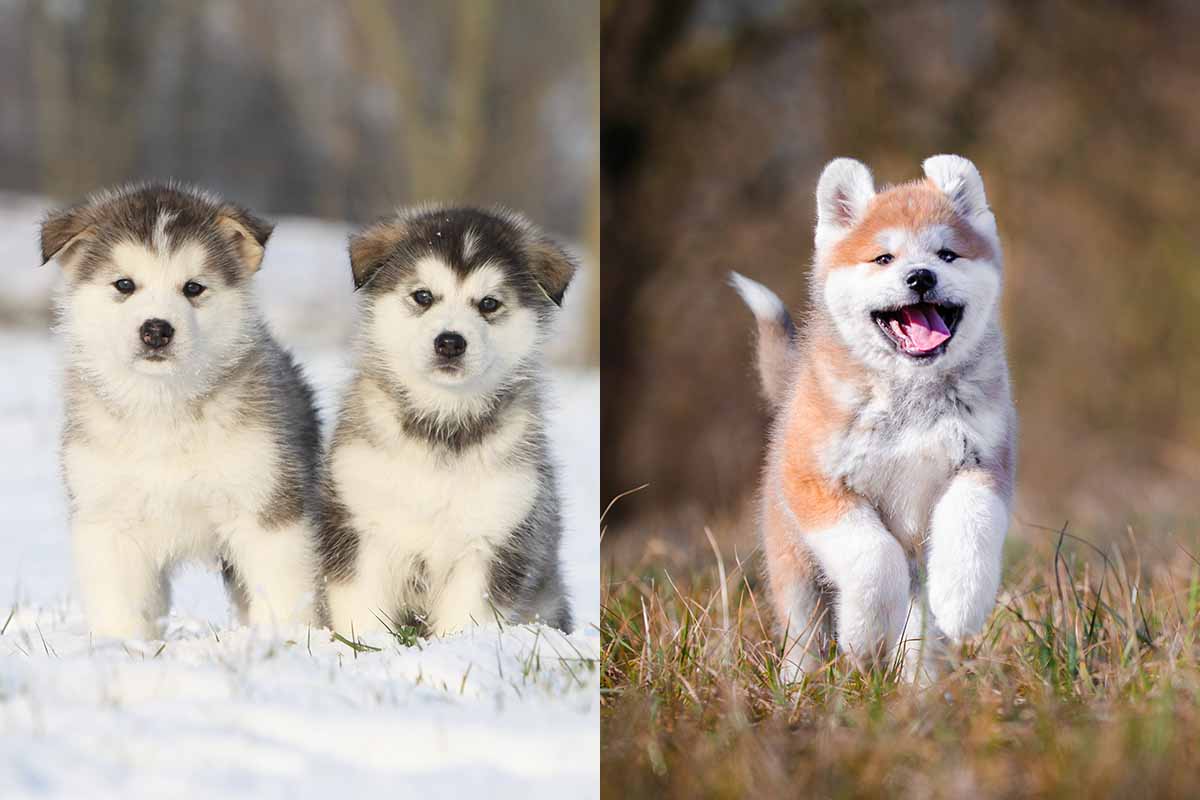 Alaskan Malamutes have an average lifespan of 10 to 14 years. Akitas will usually live to an age of 10-14 years – too.

The Difference Between Alaskan Malamute And Akita

The Akita is a slightly bigger breed than the Alaskan Malamute but the sled dog breed have more exercise needs. Alaskan Malamutes tend to be social dogs that like to meet new people and other dogs but the Akita can be aloof and reserved around strangers or pets.

The Similarities Between Alaskan Malamute And Akita

With a similar life expectancy, Alaskan Malamutes and Akitas are dogs that like to work. For that reason, they’ll enjoy participating in mental stimulation games. These two breeds are pretty quiet when compared to other dogs – they don’t raise the alarm unless they think something is suspect. Akitas and Malamutes need lots of socialization and training from a young age to lay down a good foundation for these large dogs that can quickly become too difficult to handle.

Who Is Better: Alaskan Malamute Or Akita

It’s a difficult question to answer who is better: Alaskan Malamutes or Akitas. It depends on what you’re looking for in a dog – whether you want a guard dog or a family pet, whether you want a training buddy or a fiercely loyal companion.

Alaskan Malamute Vs Akita – In Conclusion 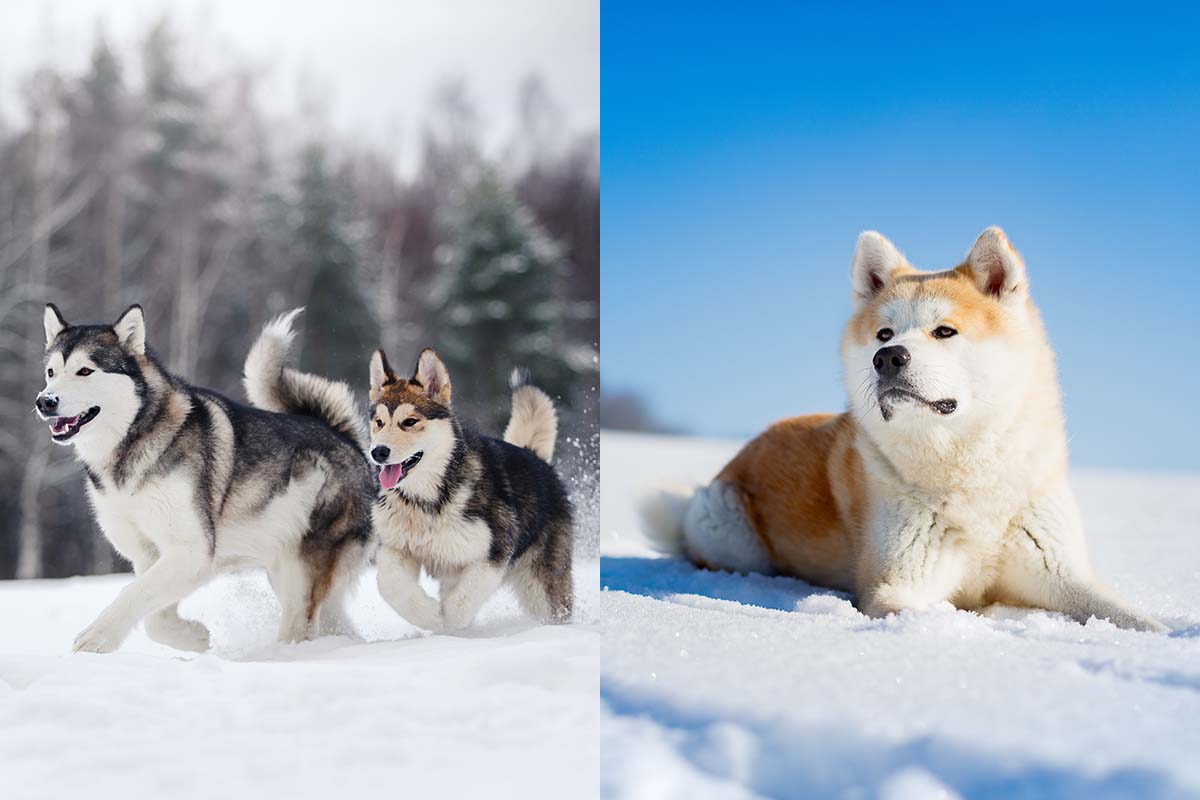 We’ve reached the end of our Alaskan Malamute vs Akita comparison article.

The Alaskan Malamute is a dog breed that can trace their history back to the northwestern region of Alaska. The Akita’s ancestors came from Japan where these dogs are much-loved.

The Alaskan Malamute and Akita are both large dog breeds that can become quite a handful without the proper training.

However, they’re loyal and loving dogs with their family members.