Are you looking to find out about the differences between an Airedale Terrier and a Welsh Terrier?

There are two dog breeds that are recognised by the American Kennel Club and the Kennel Club in the UK.

While they’re both members of the Terrier group, it’s important to note that these two dogs are different dog breeds.

While the Airedale Terrier and Welsh Terriers have some traits in common, they’ve also got some key differences.

In this comparison article, we’re going to take a look at what’s the difference between an Airedale Terrier and a Welsh Terrier.

So with the introduction complete, let’s examine Airedale Terrier Vs Welsh Terrier.

What Is An Airedale Terrier? 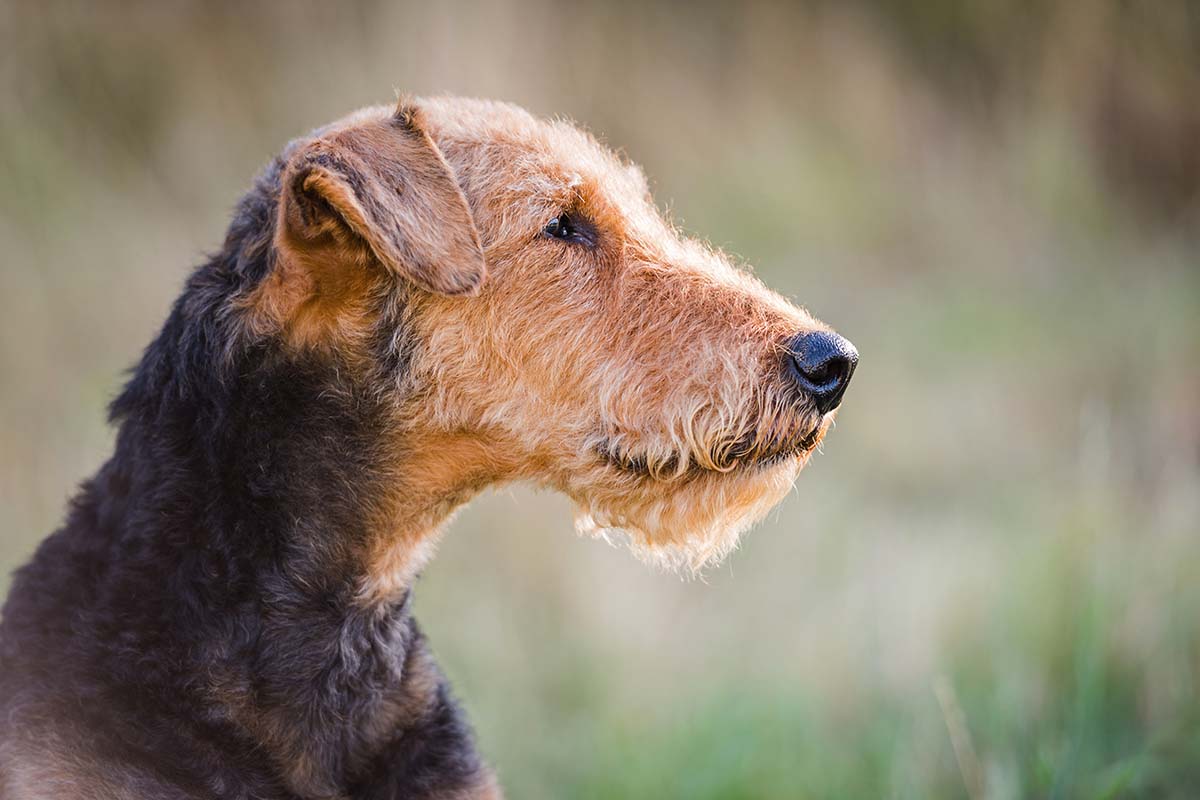 The Airedale Terrier is a member of the AKC’s Terrier group. They’re often dubbed “The King Of Terriers” thanks to what the AKC describe as his “unflagging spirit”. The AKC provide the following description of the breed:

The Airedale stands among the world’s most versatile dog breeds and has distinguished himself as hunter, athlete, and companion.

What Is A Welsh Terrier?

The Welsh Terrier is also a member of the AKC’S Terrier Group. They’re described as being intelligent, friendly and spirited dog. The AKC provide the following description of the Welsh Terrier:

The Welsh Terrier is as alert and spirited as any self-respecting terrier, but a bit calmer than most, “game, not quarrelsome,” as breed fanciers say.

Where Do Airedale Terrier Come From?

The Airedale Terrier hail from the the Aire Valley in the north of England. Aire Valley is located less than 100 miles from England’s border with Scotland. The Airedales were bred to be “large and fearless” and their function was to hunt ducks and rats in the valley.

The AKC explain that the Airedale Terrier was created by mixing together the Otterhound, English Black and Tan Terrier, Irish Terrier and the Bedlington Terrier. The Airedale Terrier needed to be big enough to tackle the quarries of the Aire Valley but sufficiently small that they can manouevre through the quarry’s underground lair, according to Wikipedia.

The AKC recognised the Airedale Terrier in 1886.

In the 20th century, the Airedale Terrier played a key role for the British Armed Forces in World War 1 as “messengers, sentries and guard dogs”. When the Airedale Terrier reached the USA, they were used as hunting dogs. The breed proved equally adept at hunting waterfowl, gamebirds and furred prey.

The AKC highlight the breed’s versatility in the following sentence on their
website:

Where Do Welsh Terrier Come From? 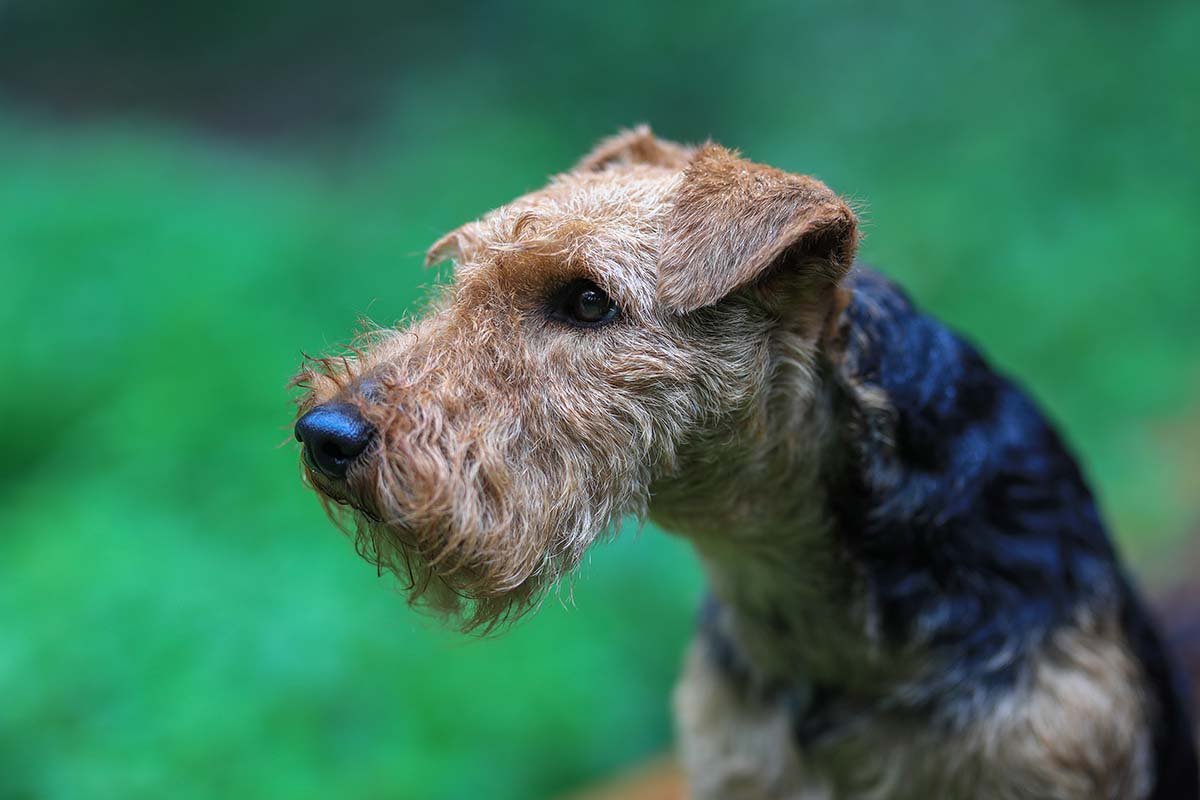 Welsh Terrier can trace their ancestry back to the 1700s. These dogs were bred to hunt foxes, badgers, otters in the mountainous regions of Wales. According to the Wikipedia, Welsh Terriers are one of the oldest dog breeds in the United Kingdom.

These dogs were built to be powerful with a low centre of gravity, with impressive and punishing jaws. Welsh Terriers, like the Airedale Terrier, is a courageous dog breed that is prepared to go toe-to-toe with dangerous animals such as badgers and foxes.

The AKC highlight some of the reasons why Welsh Terriers are considered such brave and courageous dogs:

Sturdy, compact, and rugged, with a tight-fitting black-and-tan coat and a rectangular head featuring folded ears and a jaunty beard, Welsh are constructed along the classic lines of Britain’s long-legged terriers. 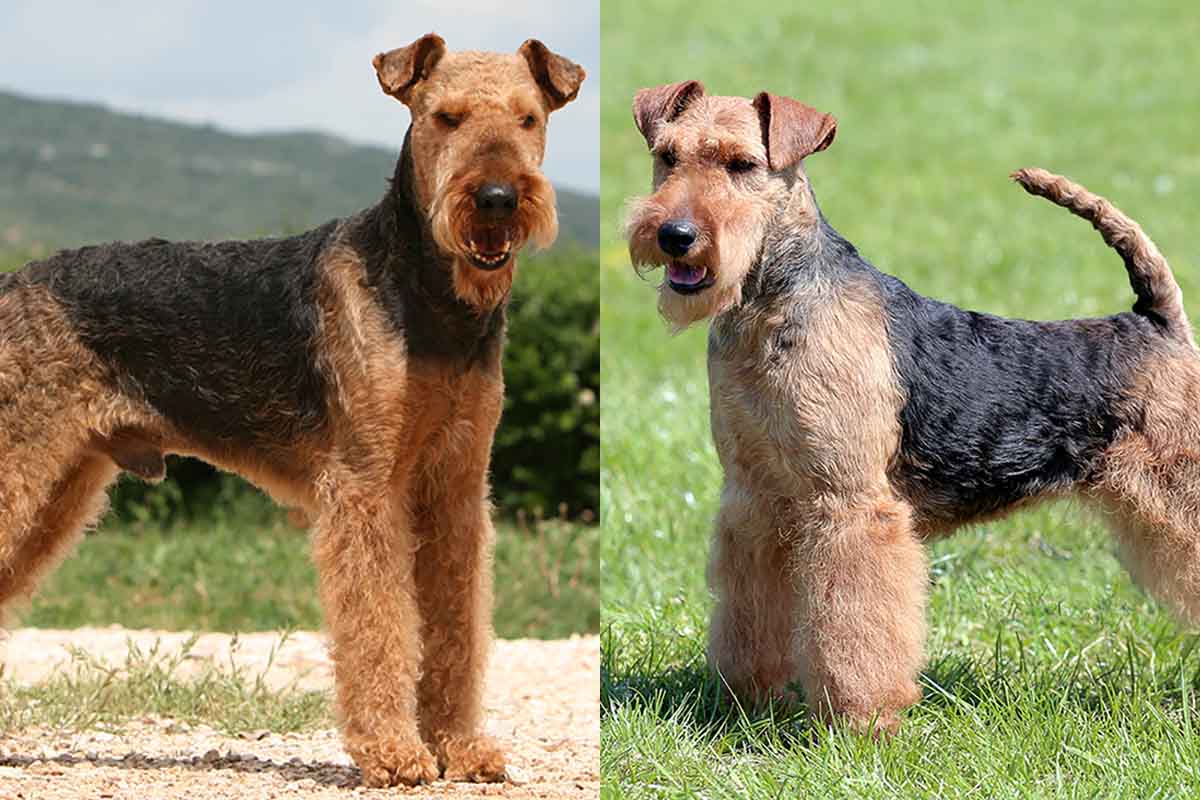 The Airedale Terrier has a trademark black and tan coat. Their coat is usually of medium-length with a coarse outercoat and soft undercoat. Airedales have a long head with a sporty beard and moustache. Airedales Terriers have dark eyes and folded ears. They have a slightly fluffy tail that stands erect. They should look alert. Here’s the breed standard:

The head and ears should be tan, the ears being of a darker shade than the rest. Dark markings on either side of the skull are permissible. The legs up to the thighs and elbows and the under-part of the body and chest are also tan and the tan frequently runs into the shoulder. A small white blaze on the chest is a characteristic of certain strains of the breed.

The Welsh Terrier is a sturdy, compact, rugged dog of medium size with a coarse wire-textured coat. The legs, underbody and head are tan; the jacket black (or occasionally grizzle). The movement is a terrier trot typical of the long-legged terrier. It is effortless, with good reach and drive. The Welsh Terrier is friendly, outgoing to people and other dogs, showing spirit and courage. The “Welsh Terrier expression” comes from the set, color, and position of the eyes combined with the use of the ears

The Airedale Terrier was traditionally used as a working dog but in the 21st century they can make much-loved family pets. You won’t be surprised to learn that Airedale Terriers can have a high prey drive seeing as they were bred to hunt ducks and vermin. They’re an intelligent dog breed that can have an underlying stubborn streak. As a result, these strong-minded dogs will require consistent and regular training and socialization at a young age. Airedale Terriers can thrive in a family home with children and other pets if they were entered the home as puppies. Airedale Terriers should always be supervised around children.

The Welsh Terrier are a friendly, energetic and outgoing dog but they can have the typical Terrier strong-willed personality. Like the Airedale Terrier, they can have a high prey drive considering their history as hunters of foxes, badgers and otters. They’ve got excellent decision-making skills. Welsh Terriers won’t be afraid to raise the alarm if they spot something unusual in the garden or outside the window. Seeing as they were bred to hunt badgers, they can be predisposed to some destructive digging if this trait isn’t tempered with some training. 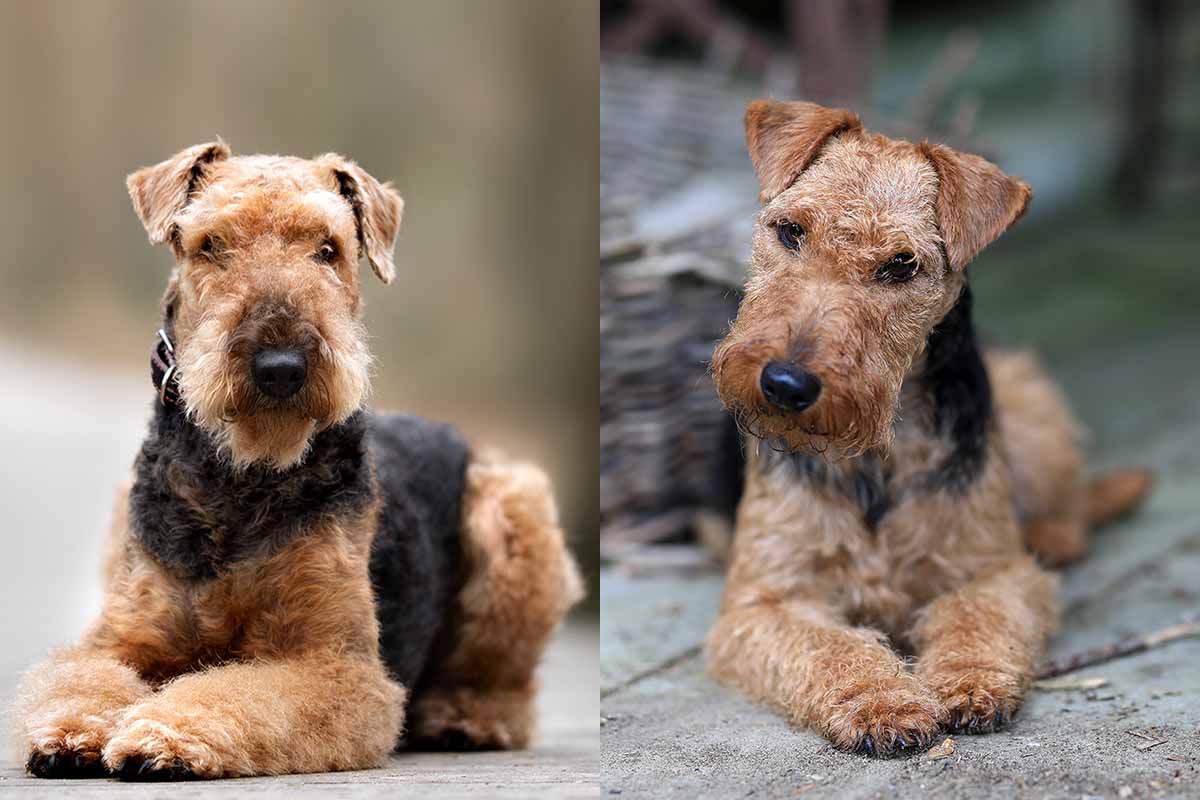 Airedale Terrier is an active dog breed that will regular regular daily exercise. As a bright, energetic dog, Airedale Terriers will require at least 60 minutes of exercise a day. This could be a walk or a romp at the dog park. However, they can enjoy a jog with their owner, a challenging hike or some mental stimulation in the back garden.

The Welsh Terrier has slightly less exercise needs than the Airedale as they’re considered one of the more relaxed members of the Terrier world. Having said that, they’ll still require around 30 minutes of exercise a day. Seeing as they’ve got a proclivity to dig, you’ll want to keep Welsh Terriers busy whether it’s exercise or mental stimulation in the garden.

With both the Airedale Terrier and the Welsh Terrier, it’s important to have a secure backyard or garden as they’re expert escape artists who will find a way to escape in pursuit of something worth chasing. 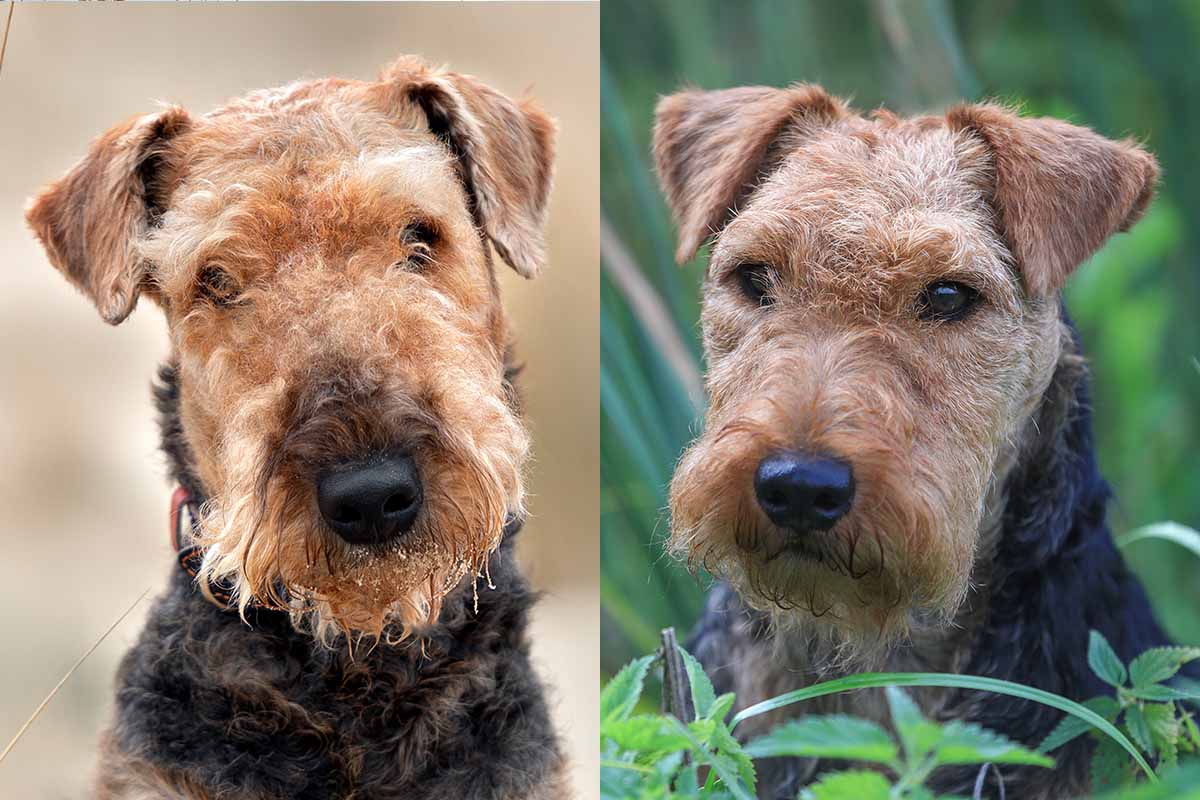 The Airedale Terrier has a hard, dense and wiry coat that can be crinkly or wavy in appearance. They don’t a lot if at all so they’re often described as being hypoallergenic dogs. While Airedale Terriers aren’t big shedders, they’ll still require regular grooming. Airedale Terrier owners should try to brush their dog at least once a week to remove dead hair and dirt. They’ll require a professional grooming around three or four times a year, including a bath and a trim.

The Welsh Terrier has a similar coat to the Airedale Terrier. It’s described as being hard, wiry and dense with a close-fitting jacket. They do have a softer undercoat. Welsh Terriers have a coat that can be hand-stripped. They’ll need to be clipped every eight to twelve weeks, but Welsh Terier owners will need to commit to a brushing session at least twice a week. Just like the Airedale, they’ll need a bath and a trim around three or four times a year.

You should always go visit the breeder, ask to see your pup’s parents as well as proof of vet checks and relevant vaccines.

The Airedale Terrier has an average lifespan of around 11 to 14 years. The Welsh Terrier has a life expectancy of 12 to 15 years.

The Difference Between Airedale Terrier And Welsh Terrier

The Similarities Between Airedale Terrier And Welsh Terrier 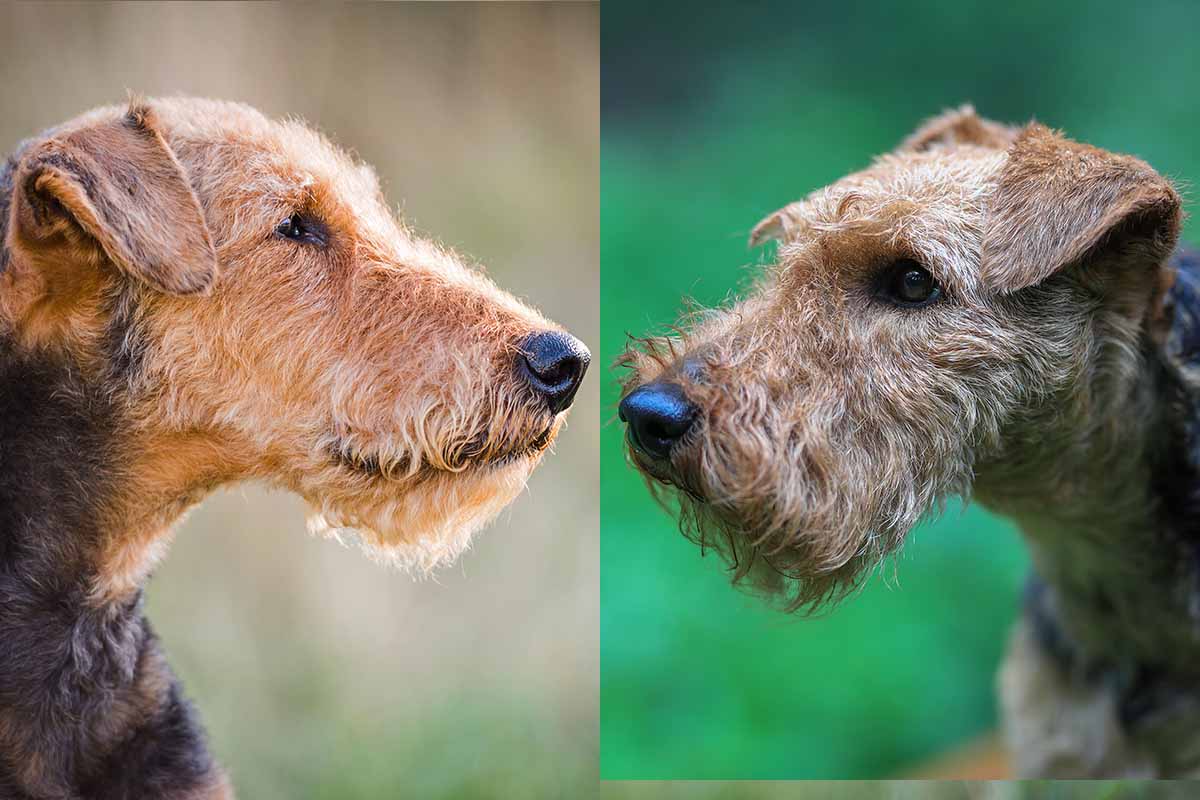 We’ve reached the end of our Airedale Terrier vs Welsh Terrier comparison.

They’re two dogs with a lot in common in terms of appearance and temperament.

These two Terriers are alert dogs that like to chase other animals, but can make good family pets as they’re affectionate and loving with their owners and other members of the home.

However, the Airedale Terrier is a bigger Terrier than the Welsh Terrier, perhaps proving to be the most notable difference between these two dogs.