You’ve almost certainly heard of a Poodle or perhaps even met one.

The Poodle is perhaps most famous for their unique, waterproof coats, which can be trimmed in a number of different ways.

These waterdogs are popular thanks to their hypoallergenic coats, which are low-shedding and less likely to trigger allergies.

These French dogs have been mixed with countless breeds to create hybrid dogs in pursuit of hypoallergenic canines.

Some of the most common examples of Poodle mixes include the Goldendoodle and the Cockapoo.

However, we’re going to breakdown the 20 most popular Poodle cross breeds in this article.

The Bernedoodle is a cross between a Bernese Mountain Dog and a Poodle. They’re considered a great family dog as they like human companionship, while they enjoy interaction and playtime at home. Bernedoodles can have a variety of coat types, rangning from curly, wavy or straight. This mix can come in three different sizes: standard, miniature and toy. The size of the Bernedoodle is usually determined by the size of the Poodle parent. Bernedoodles are likely to be hypoallergenic thanks to the influence of the Poodle genes, but that’s not to say they won’t shed a little.

The Bichon Poodle is a mix between a Bichon Frise and a Poodle. They can also go by the name Poochon. This hybrid dog was first created in Australia in the late 1990s. They were created to be loving companion dogs who relish the company of humans. Bichon Poodles are usually small in size, making them an excellent option for dog lovers living in apartments. They can come in a range of colors, including cream, tan and apricot.

They like having things to do, playing games and going places. They are tolerant, affectionate and very loyal. They are ideal as family pets and well suited for kids. 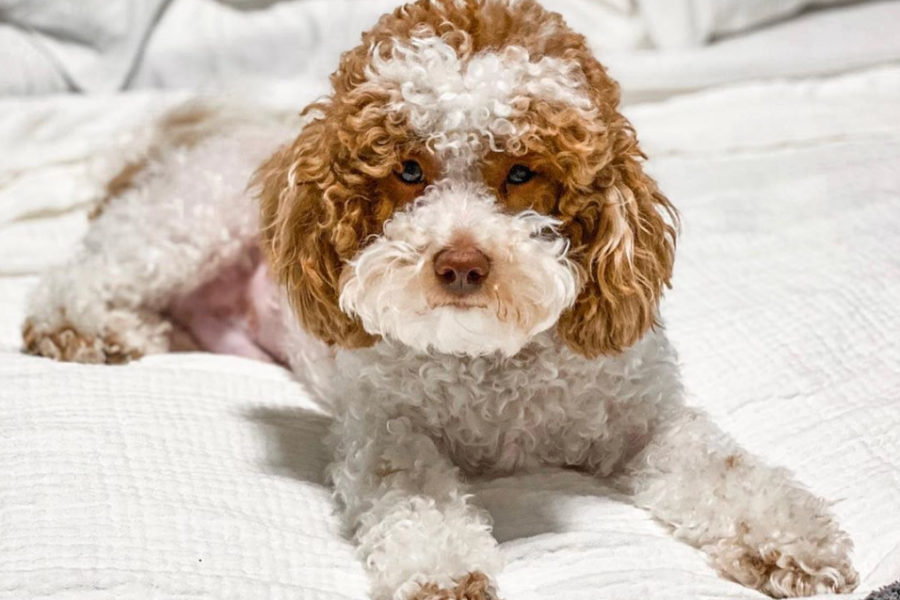 The Cavapoo is a combination of two great breeds: the Cavalier King Charles Spaniel and the Poodle. Cavaliers are known for their sweet personalities, making Cavapoo much-loved pets. Although Cavaliers are moderate shedders, the influence of the Poodle genes means that most Cavapoos won’t shed a lot. Here’s Cooper the Cavapoo to give an insight into these designer dogs:

Cooper has been very easy to train since he’s eager to please and quick to learn! I definitely was not the best at strict training, but somehow Cooper is an angel! 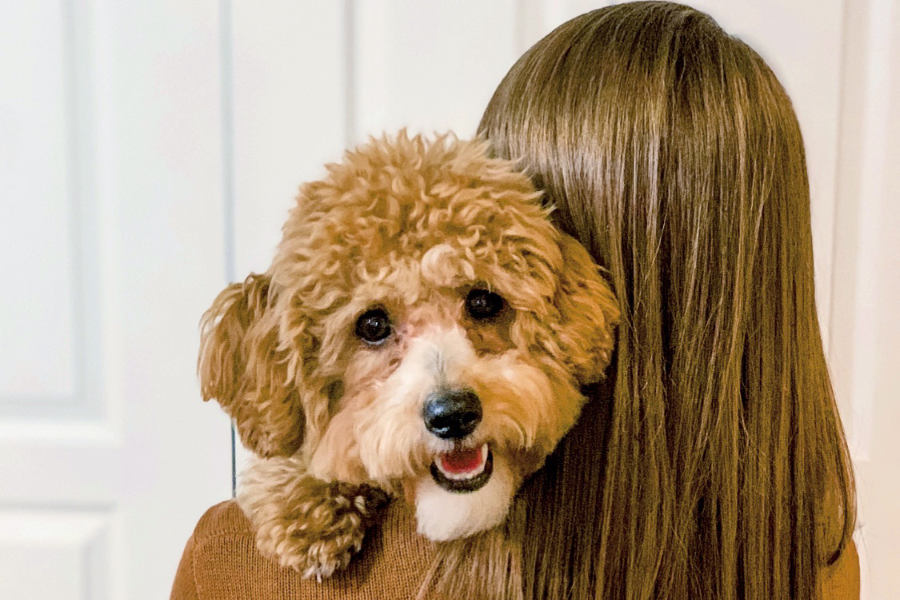 This mix combines three breeds to create a loving companion dog. Cavapoochons are a cross between a Cavalier King Charles Spaniel, Bichon Frise and a Poodle. Breeders will usually cross a Cavachon with a Poodle to create the mix. They’re not as common as some Poodle mixes but Cavapoochons have grown in popularity in recent years. Cavapoochons should be low shedders given Bichon Frise and Poodles are considered hypoallergenic breeds.

A Chipoo is a mix between a Chihuahua and a Poodle. They’re usually small dogs given breeders will use a toy Poodle to create these hybrid dogs. They can go by a variety of different names, including Choodle, Chipoodle, Poochi, and Poohuahua. They’ve also got a range of different colors, including brown, blue, brindle, silver, fawn, white and black. These small dogs are perfect for urban dwellers. They may not be suitable for young families given they’ve got delicate bodies and aren’t robust. 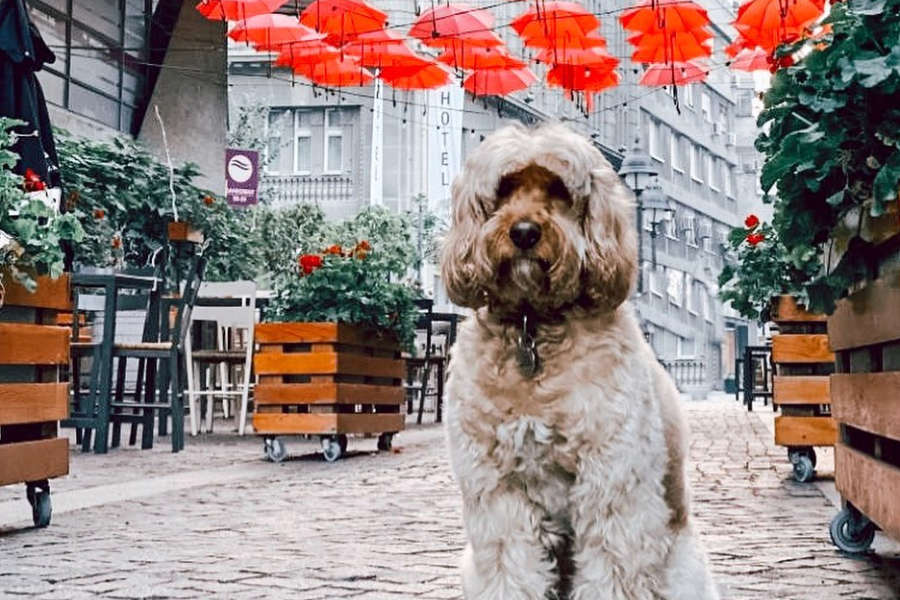 One of the most famous examples of a Poodle mix is the Cockapoo. They’re a cross between a Cocker Spaniel and a Poodle. This combination has proven particularly popular in the UK. This is an energetic dog given both the Cocker Spaniel and Poodle were used to retrieve game during hunting expeditions. They can be a little tricky to train than some Poodle mixes but overall can make fantastic pets. Here’s Miss Darcy the Cockapoo to shed more light on the breed:

I am obsessive about being clean – so slowly I built a list of requirements – size mattered, non or little moulting and given the proximity to neighbours, not one that is yappy – and not a breed that needed a lot of exercise. Cockapoos tend to be medium sized, most do not moult and they are intelligent dogs. 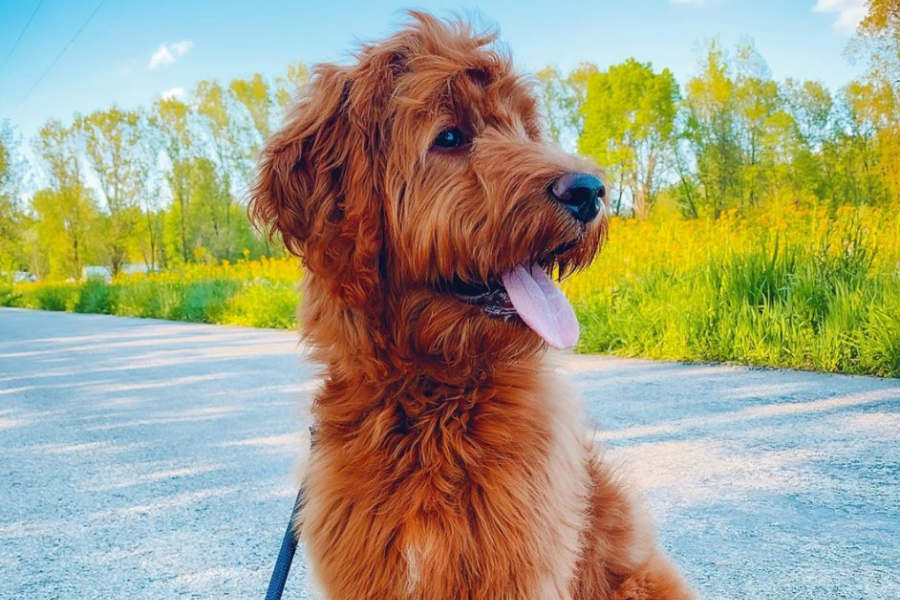 Bubba is SUPER laid back, very smart, and easily trained. He is loving and always happy. He gets excited to see people, but that lasts about five seconds and he goes back to doing whatever he was doing. He is hardly ever alone, but I have left him alone a handful of times to do things outside and run to the store and he has never chewed anything up. He was also potty trained in less than two weeks.

Labradoodles are a pretty easy mix to figure out. In case you’re having trouble, they’re a mix between a Labrador and a Poodle. These are two energetic dog breeds so you can bet that a Labradoodle is going to need a lot of exercise or mental stimulation to keep them entertained. The good news is that if you love Labradors but you don’t like dog hair, this could be a solution for you.

Arguably the most famous Poodle mix is the Goldendoodle. This hybrid dog combines the popular Golden Retriever with the Poodle to create a great low-shedding family dog. These dogs, like Labradoodles, will require a lot of exercise given both their parents are energetic breeds. Goldendoodles usually have hypoallergenic coats that will need regular grooming to maintain their condition.

The Maltipoo is a mix between a Maltese and a Poodle. The cross breed were created to be much-loved companion dogs. They’re an active dog that will require a daily walk or two. They’ve got a reputation for being good watchdogs as they’re alert with a tendency to bark. Maltipoos should be pretty smart, so training shouldn’t be too difficult. We recommend starting from a young age.

The Newfypoo is a cross between a Newfoundland and a Poodle. This is proving to be a popular hybrid mix between big dog lovers. They’re a cross with a lot of talents, while both breeds have an affiliation with water. As we already know, Poodles are the second smartest dogs in the world, but Newfoundlands are also intelligent. They’re usually a big mix so they won’t be suited to those living in apartment complexes or in big cities.

This isn’t a children’s game but in fact a dog! The Peekapoo is a cross between a Pekingnese and a Poodle. The result is a designer dog that is relatively active, with a daily walk sufficing. They can make great watchdogs and are known to be a mixed breed that likes to bark. Having said that, they’re loving and loyal to their owners and enjoy receiving affection.

The Pomapoo is a mix between a Pomeranian and a Poodle. Breeders will usually use a toy Poodle and a Pomeranian to create this mix. They’re likely to have a curious streak, inherited from their Pom parent. They can make excellent apartment dogs given their small size, while they should be low shedders thanks to their Poodle parent.

A Saint Berdoodle is another big designer dog. These pups are a cross between a Saint Bernard and a Poodle. The result is an intelligent and loyal dog that can be great for families with active children. They love to please their pet parents, which can make them easy to train. Saint Berdoodles love to receive affection from their pet parents.

A Schnoodle is a cross between two hypoallergenic dog breeds: the Poodle and the Schnauzer. We can say with some degree of certainty that Schnoodles with be very low-shedding dogs if they shed at all. They can have a fluffy coat that is hypoallergenic. These dogs will require some socialisation from a young age to get them used to meeting new dogs, people and situations.

To get a Sheepadoodle, you need to cross an Old English Sheepdog with a Poodle. The result is an energetic but loving dog that can be a great fit for families. They’re usually quite docile in nature with a lot of love to give. They’ve have significant grooming requirements given the sheer size of these dogs. Here’s what Bertie the Sheepadoodle had to say on the mixed breed:

He’s full of energy and loves to be with people. We joke that he’s a stage 5 clinger since he always follows us around from room to room. I like to think that he knows how to tell time since he will wake up from his nap, go sit on the couch, and stare out the window at 5pm on the dot on weekdays to watch for us to come home.

A Shihpoo is a cross between a Shih Tzu and a Poodle. The result is a loving companion dog that will relish spending time with their pet parents. They can be quite stubborn, so you’ll want to start training your Shihpoo puppy from a young age to make sure they get the basic training down. They don’t require a lot of exercise, they like to relax and curl up on the sofa next to their owners.

No prizes for guessing this mix. It is, of course, a cross between a Yorkshire Terrier and a Poodle. These dogs are usually pretty small given the size of the Yorkie parent and the toy Poodle parent. They can be quite energetic and robust, enjoying a romp around the garden or backyard. Yorkipoo will benefit from regular socialisation from a young age to give you the best chance of having a balanced and friendly dog.

Whoodles are a mix between a soft-coated Wheaten Terrier and a Poodle. These are two breeds known for having hypoallergenic qualities, so a Whoodle should be a low-shedding dog. They’re smart and friendly but will still require regular training to establish ground rules from a young age. They can also be called Wheatendoodle, the Wheatenpoo, the Sweatendoodle, and the Sweatenpoo.