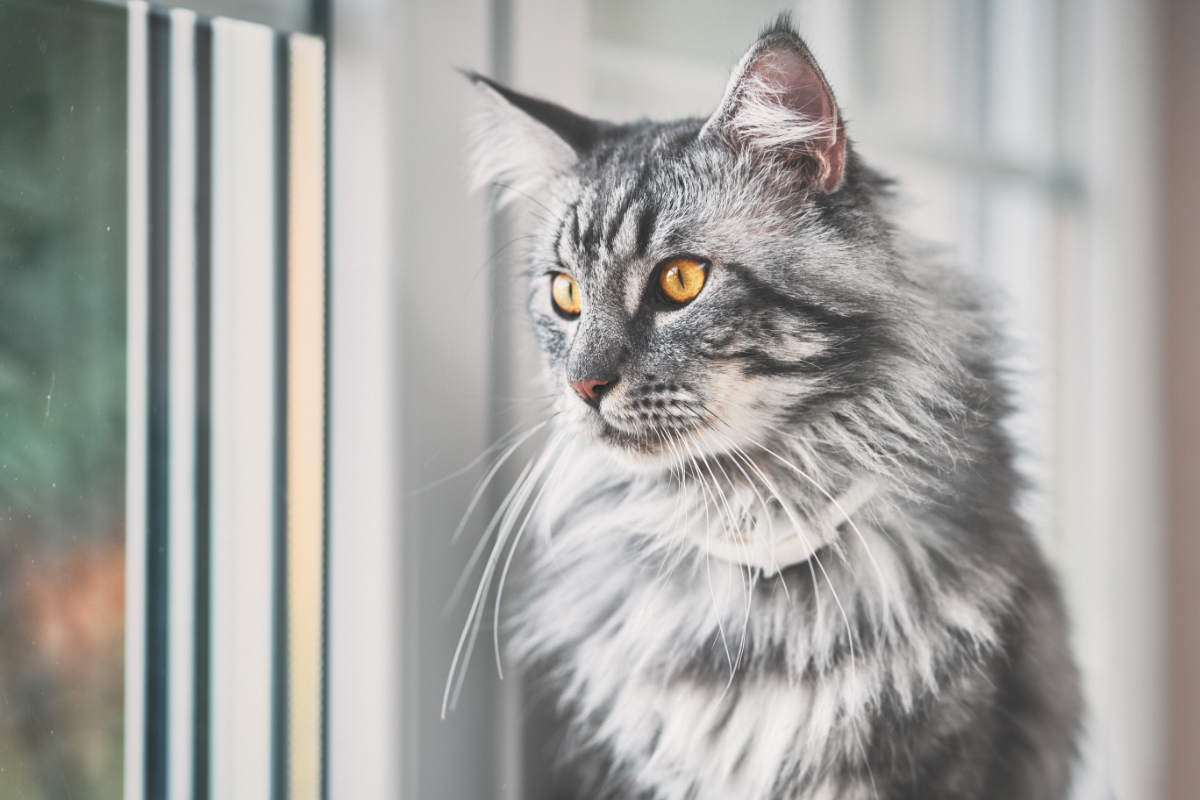 Maine Coons are the largest domestic cat breed in the world and are universally adored for this trait.

Originating from Maine, USA, they are one of the oldest natural breeds in North America. Males typically weigh up to 18 lbs and females up to 12 lbs, but they can exceed 30 pounds!

They also have incredibly long bodies, typically measuring up to 40 inches. Barivel the Maine Coon from Italy holds the record for the longest domestic cat in the world, measuring 120cm (47.2 inches!)

While these stats are impressive, there is so much more to these giant felines than their size. So we scoured the web to hear from Maine Coon owners about the biggest pros and cons of living with the world’s most enormous kitty.

Considering their size and wild cat lineage (they descend from the Norwegian Forest Cat), we think you’ll be pretty surprised about our findings. Read on to discover the pros of bringing a Maine Coon into your home and what you should consider before making a final decision. 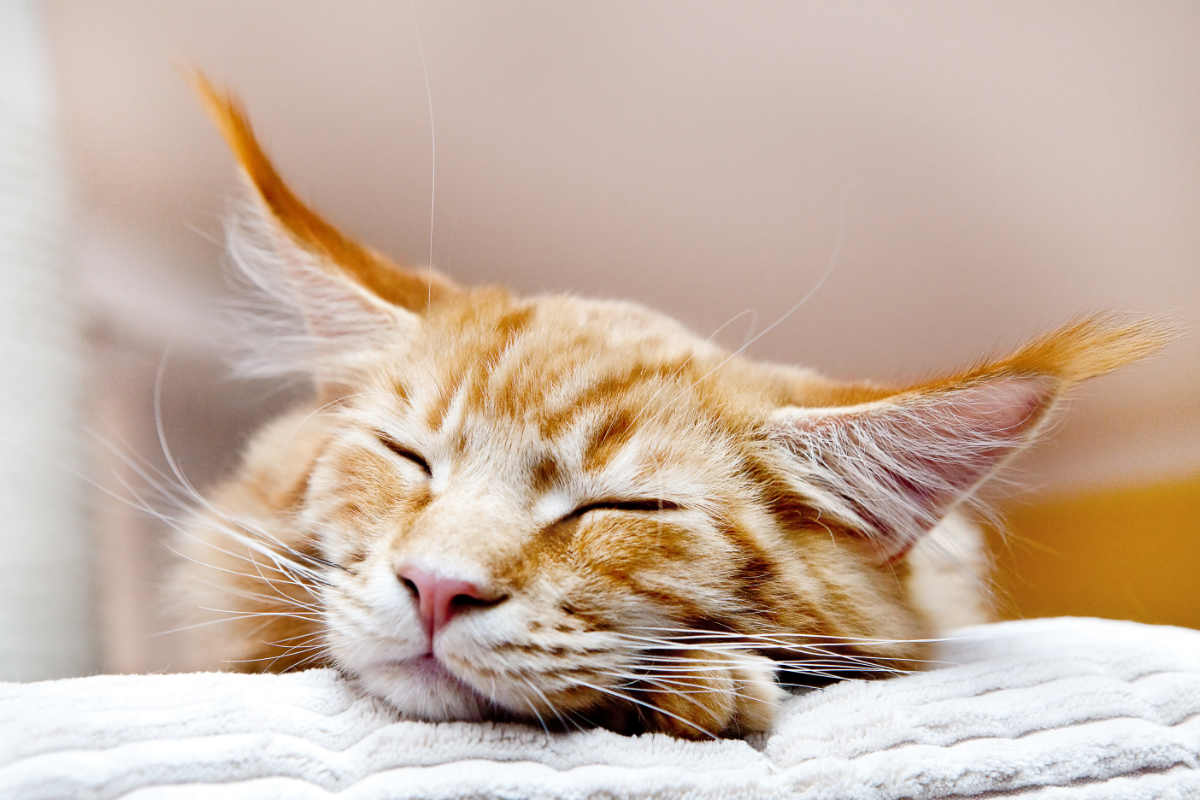 When we asked Maine Coon owners what the best thing about this breed is, they all commented on how loving they are. Cat owner Marie Garland shared her experience of life with a female Maine Coon on Quora:

She’s floppy when I pick her up and loves to be held on my shoulder, upside-down; anyway, it doesn’t matter as long as she’s getting cuddles. When I make eye contact with her, she squeaks to ask for pets.

However, don’t worry if you want to shower in peace, as they won’t get offended and hold a grudge if you close them outside the door.

Another dog-like quality is their loyalty. Describing this breed, Eija Lintunen Vogel says:

They are devoted to you with a connection that only one who has bonded with them understands, and you become just as devoted to them.

When you develop a bond like this with a Maine Coon, you’ll notice how they protect and look after you in various ways.

Discussing what it’s like having a Maine Coon as a pet, Giraldo Alvarez talks about his male cat:

He’s very patient, watches everything, guards his territory, and if any cat comes over, he proceeds to fight them out.

Once I got sick while I was on vacation at my mom’s home…he protected me from my mom coming into the room…my mom said she was truly scared she would be attacked if she came in.

Despite having a wild cat lineage, Maine Coons are known for their calm, patient, and gentle nature. This makes them an ideal choice for homes with children or other pets. These kitties absolutely love to play and will create a game out of anything.

Maine Coons do not tend to be aggressive, so they will never unpredictably lash out at you during a play session. Therefore, they can and often do, become great friends with children living in the house as they match their playful energy. 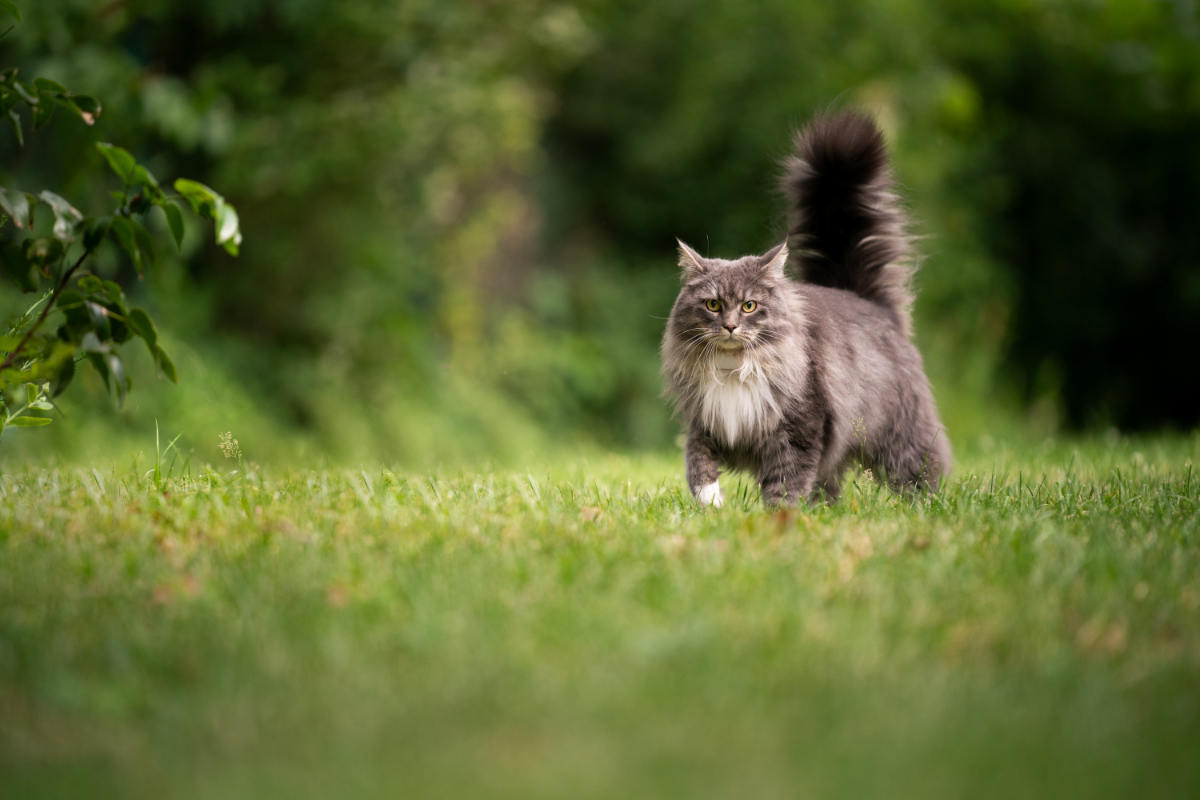 There’s no denying that Maine Coons are incredibly handsome. They are blessed with thick coats that look gorgeous and feel soft and silky to the touch. According to Maine Coon Central, 75 different combinations of colors and patterns are possible for this breed. However, brown and black are by far the most common.

The Maine Coon’s coat is double-layered and long, which makes them look even bigger. Their cotton-like fur and their cuddly personalities make them the ultimate teddy bear.

Their coats look even more stunning because of the differing fur length throughout their body. Often, Maine Coons have shorter fur on the shoulders and longer hair on the stomach and britches. Some also have long tufts around the neck, creating the appearance of a lion’s mane. And let’s not forget their incredibly long, bushy tail!

While they may not take the top spot of the most intelligent cat breed worldwide, Maine Coons are still very clever. For example, many Maine Coon owners successfully teach their kitties tricks and train them to walk on a leash.

Their emotional intelligence is also impressive. The deep bond they build with their owners allows them to read human emotions and pick up on any changes in their owner’s emotional state.

Although they are not the most intelligent cat breed, there is a well-known story about a Maine Coon named Sullivan. Supposedly, Sullivan could identify colors, shapes, and numbers. Moreover, Bruce Dyer on Quora is convinced that his late cat Sasha is “the smartest cat I’ve personally known.” He goes on to say:

She learned to imitate a human kiss, move her bed next to a heating vent, and put a piece of foam in her bed to use as a pillow.

That’s pretty impressive if you ask us! 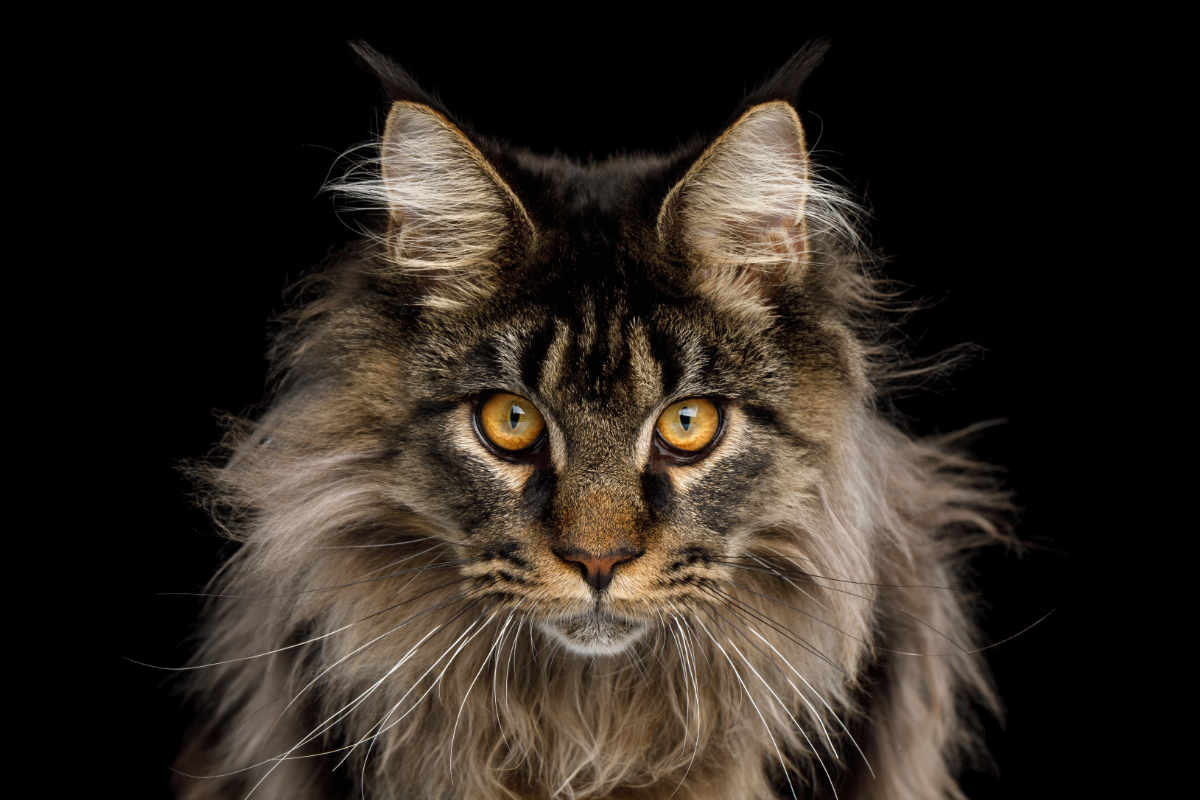 The downside of their gorgeous long hair is that it sheds a fair amount. Barrie Creedon Wennberg on Quora gives the following advice to new Maine Coon owners:

You must brush them on a regular basis; otherwise, a) there will be cat hair EVERYWHERE and b) probably a lot of hairballs everywhere.

Some Maine Coon owners brush their fluffy friends daily to reduce the amount of fur in the home. However, two or three times a week is sufficient to keep mats and tangles at bay and find any food that has got stuck in their hair!

Luckily, as they don’t have a thick undercoat, it doesn’t take long to brush them. Compared to other long-haired breeds like Persians, Maine Coons are not so high maintenance.

As the world’s biggest domestic cat, you would assume these massive felines are full of confidence and self-assurance, putting smaller cat breeds in their place.

However, many Maine Coons are surprisingly skittish and take a while to adapt to anything out of the ordinary. They can also find too much stimulation overwhelming. In situations with loud sounds or a large group of people, they may resort to hiding until the situation calms down.

He was a touch OCD; change bothered him a lot. For example, move a chair in the living room, and it could take him a day or more to come to terms with it.

Some Maine Coons’ anxiety is linked to their need for frequent human attention. They are not the most independent cat breed, and some may cry and suffer separation anxiety while away. This is also why they are often called the “dogs of the cat world.”

They eat a lot 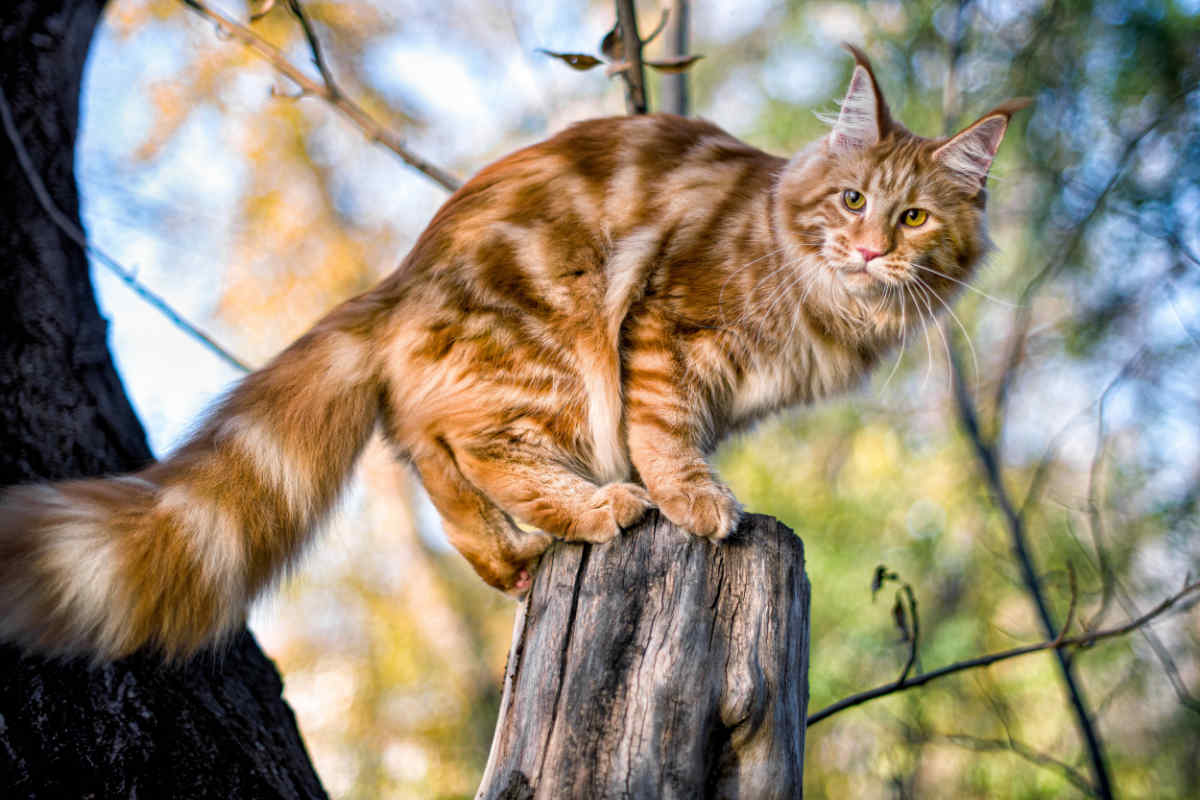 The Maine Coon’s colossal size is one of the top reasons people choose this breed. Yet just like dogs, the bigger the cat, the more they will eat. This is especially true when they are kittens.

Maine Coons are born pretty much the same size as any other kitten. However, they grow faster and continue growing for what feels like forever (Maine Coons take four to five years to fully mature). So if you’ve had smaller cats before, you will probably notice you’ll need to buy more cat food this time.

But aside from their bigger stomachs, most Maine Coons love eating and can be very food-oriented. They will eat pretty much anything, which is both a good and a bad thing. They will enjoy any cat food you buy, but they may also try to get into your snack drawer.

Discussing the cons of owning a Maine Coon, Marie Garland says, “If you get a Maine Coon kitten, expect to feed them a ton while they are growing.”

When speaking with Maine Coon owners about the cons of this fluffy breed, something that came up a lot was their predisposition to heart issues. Robert Rowe retells the battle he had with Dashielle’s poor heart health:

“Dashielle came up with an enlarged heart in his eleventh year. We did manage to keep him in a great quality of life for two and a half years before his heart began to give out.”

“These majestic gentle giants are great, but due to their genetics, many suffer from heart disease and die earlier than other cats. My first cat was half Maine Coon. I always assumed that he would get heart problems later in life, but he died completely unexpectedly of heart-related complications shortly after he became three.”

Of course, most cat breeds are prone to one or two medical issues, especially as they age. Being aware of their predispositions and taking them for regular vet checkups will help you immediately catch anything concerning. It’s also worth noting that aside from heart health, Maine Coons are a pretty hardy breed. 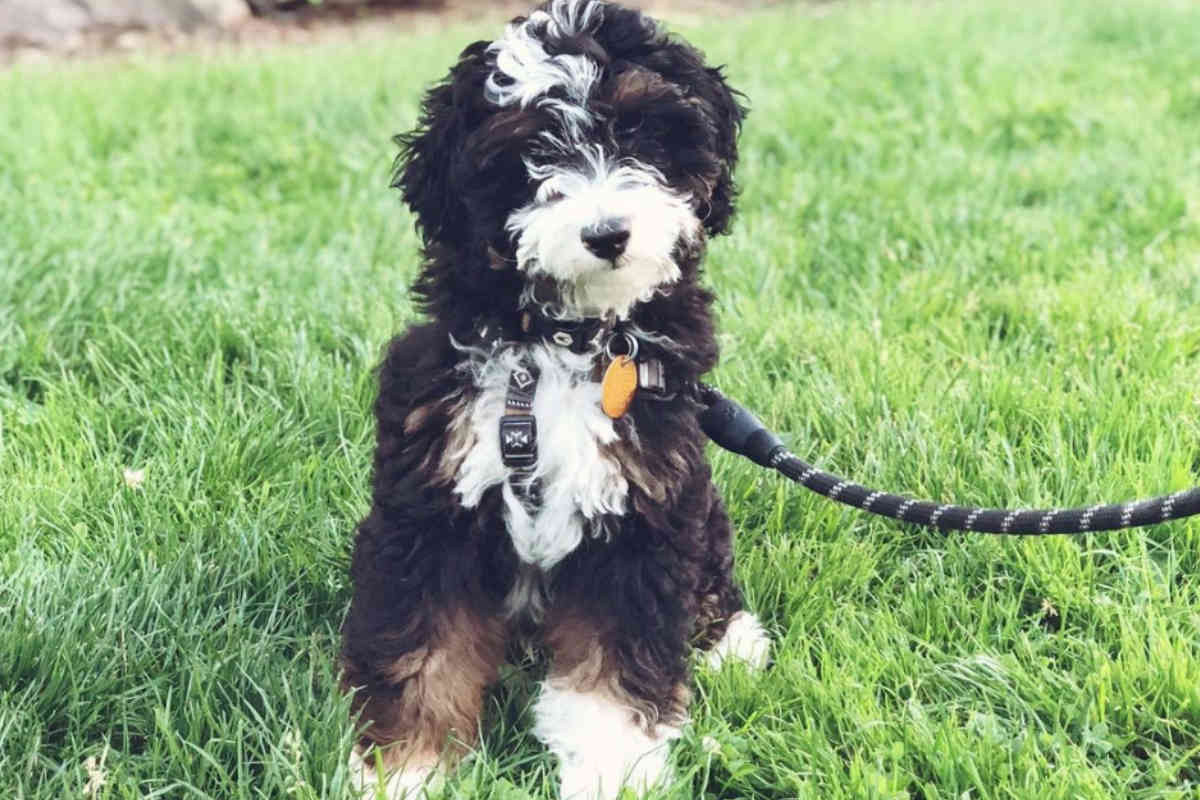