Why Do Dogs Stare At You When They Poop? 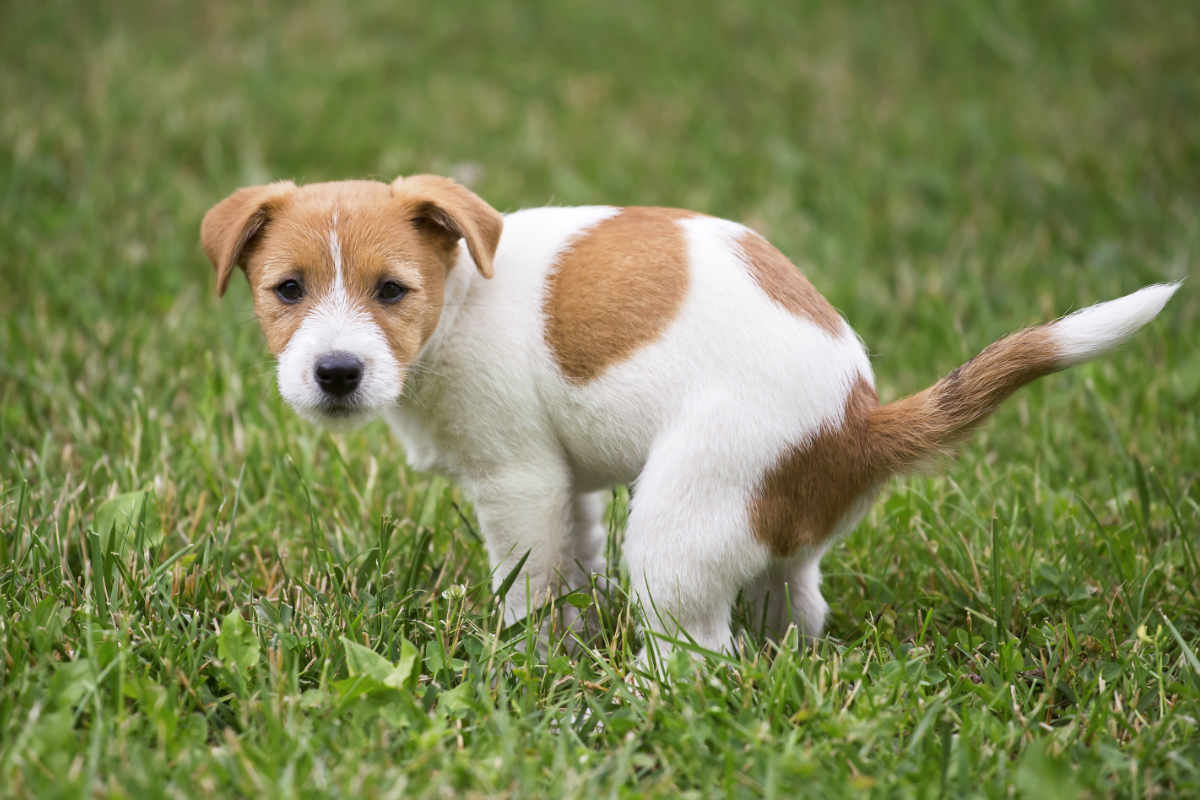 Does your dog stare at you when they poop?

My Alaskan Klee Kai always hold my stare when they’re doing their business, whether we’re in the garden or walking in a our neighborhood.

A lot of dog owners will have experienced this awkward moment at some point in their time being a pet parent.

I assumed that my mini huskies stare at me because they’re looking for me to keep an eye out for any potential threats.

In this article, we asked five experts to give their insight into why dogs stare at their owners when they poop.

There are only two ways to definitively know for sure: ask the dog, or perform a functional analysis, which is an applied behavior analysis technique that is used to collect data on and determine the function of a behavior.

The basis of all functionally significant behavior is escape, attention, tangibility, and sensory input. When theoretically applying these functions to the context, here is what we may find:

• Escape: A fearful or anxious dog may feel comforted by the sight of the owner when in a vulnerable position.This is especially true if this behavior is attributed to a past experience of a similar context.

• Attention: If making eye contact with the owner has been previously reinforced (i.e. dog gets rewarded for “checking in” during training lessons, etc.), the behavior may be due to attention. If the dog gets attention every time it looks at the owner, he may simply be performing two tasks at the same time in which one occurs directly after the other: pooping and seeking attention. Further, if the dog has been scolded for defecating in a different context, negative attention may be the reason that he is performing this behavior.

• Tangible: Dog receives something tangible from the owner. An example would be a dog who gets a treat every time he poops outside. In this case, the function of the staring is to receive the treat after defecating.

• Sensory: Sensory behaviors are behaviors that are automatically reinforced. An example of how sensory is functionally relevant to a dog staring at an owner while pooping would be that the dog cannot perform any other activity while pooping and has nothing else that is visually stimulating to look at; therefore, staring at the owner is reinforcing to the dog. 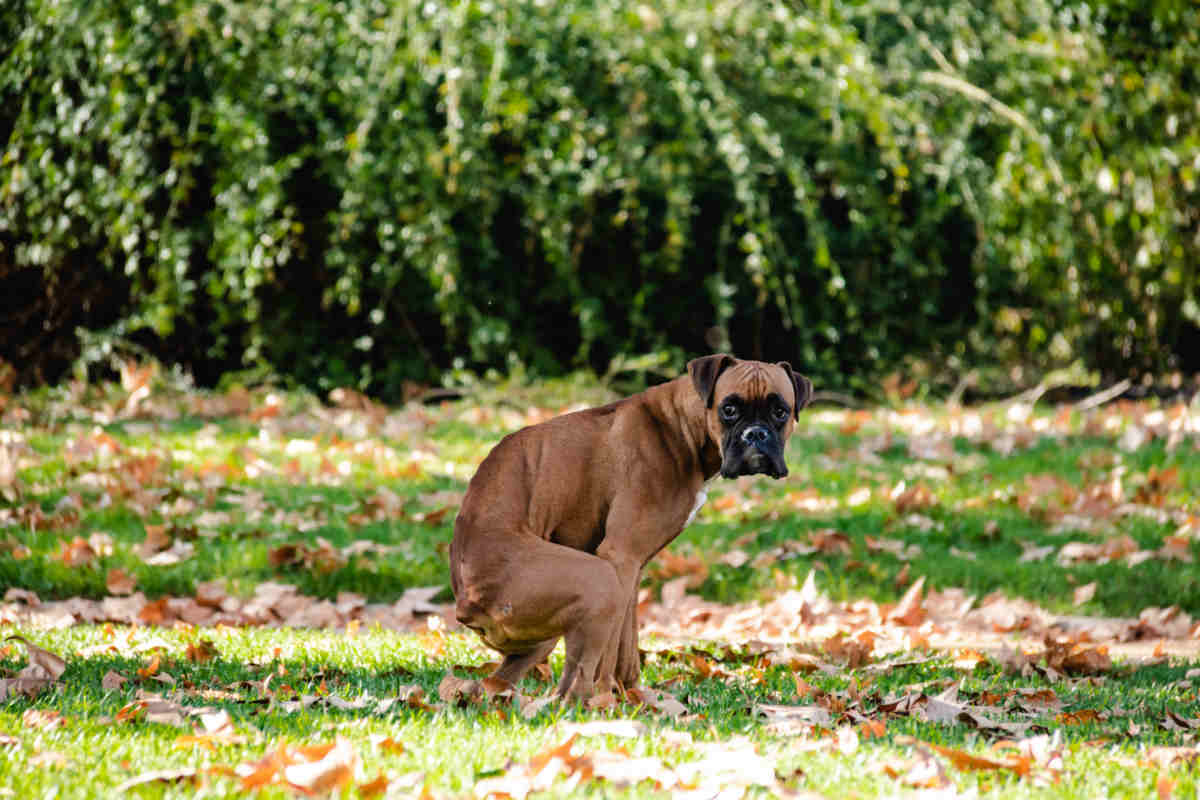 Boxer doing his business in some leaves (Photo: Adobe Stock)

The awkward poo stare is one many pet parents are familiar with, but why do dogs stare at you as they do their doggy business?

Most experts agree it’s because when a dog is defecating, it’s one of his most vulnerable moments.

Your dog is looking to you as his protector to essentially watch his back while he does his deed.

Uncomfortable, but also kind of sweet.

Dogs are pack animals who instinctively try to stay within eyesight of each other in order to keep the pack together, which is why they will distress vocalize when separated from their pack, and also why domestic dogs follow us from room to room inside the house.

Eye contact, therefore, is one of the ways that pack animals can communicate non-verbally that also promotes a feeling of security as the pack roams – it is, in essence, a way of keeping tabs on each other.

Domestic dogs still have many of the same instinctive drives as wild dogs, and any animal taking a moment to relieve themselves is at its most vulnerable for attack, especially since the scent of fresh poop can attract other animals (think about the scent left behind when we poop to imagine how the scent of poop carries.)

Thus, eye contact while a dog takes the time to poop promotes a sense of security that you are looking out for your dog as they are at their most vulnerable while doing their business.

Additionally, we almost always accompany our dog to the potty spot and rarely leave their side while they do their business, so this does become a shared ritual in many respects. Often, dogs are rewarded for pottying outside which promotes that they keep their eyes on you while they potty in expectation of a reward or praise.

They Want Praise Or A Reward 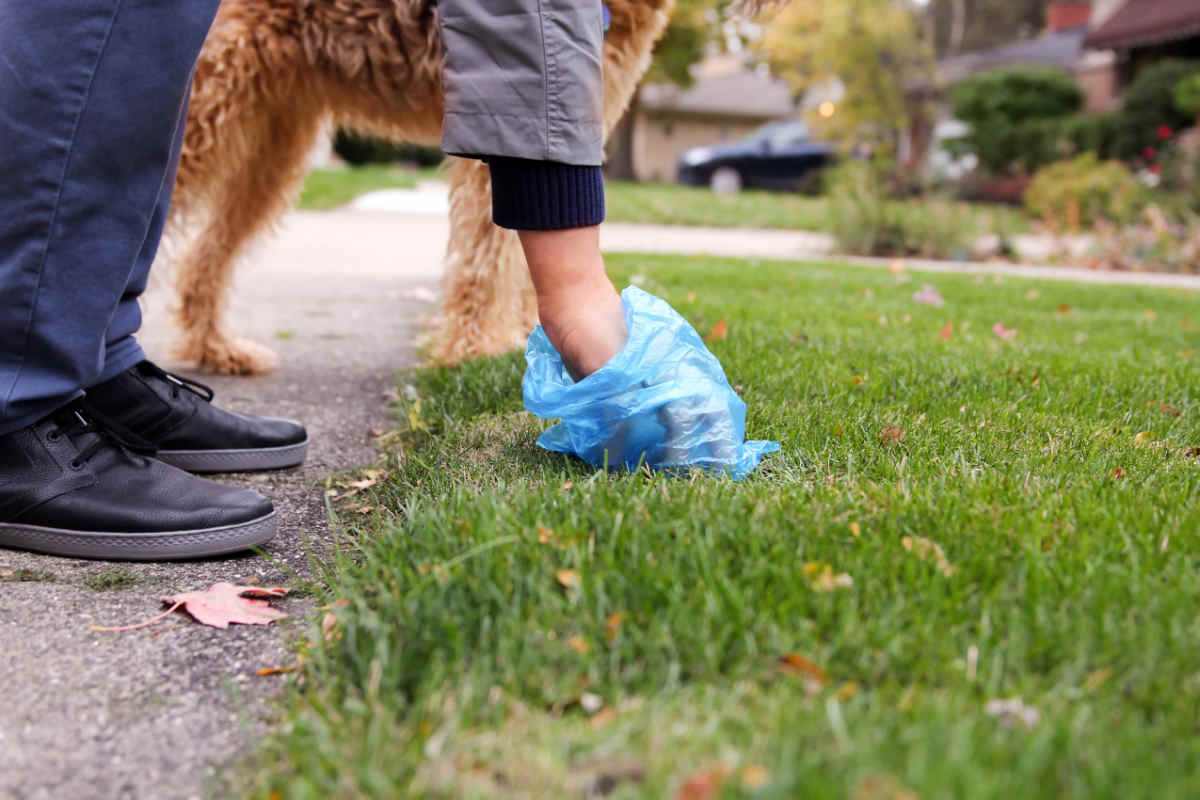 Ensure You’re Not A Threat

As uncomfortable as it may be that your dog is staring at you or another person while they are defecating, there are two main behavioral reasons for this action.

The first reason is they are watching a person intently to ensure they are not a threat to their well-being. While in the squatting position, performing their business, dogs are in a vulnerable place for attack from a predator.

Typically, if there is an unfamiliar face outside watching your dog defecate, your pet will keep a close eye on them to ensure they are not going to attack.

The second reason is that you are providing protection that attack and may warn or signal that danger is imminent. Since dogs are pack animals, you are considered part of the pack. A pack member’s responsibility is to be on the lookout when another member may be in a vulnerable position. Your dog is looking for signals with your body language to know if a threat has arisen.

Can Dogs Tell Babies are Babies?