Why Do Dogs Lick You? 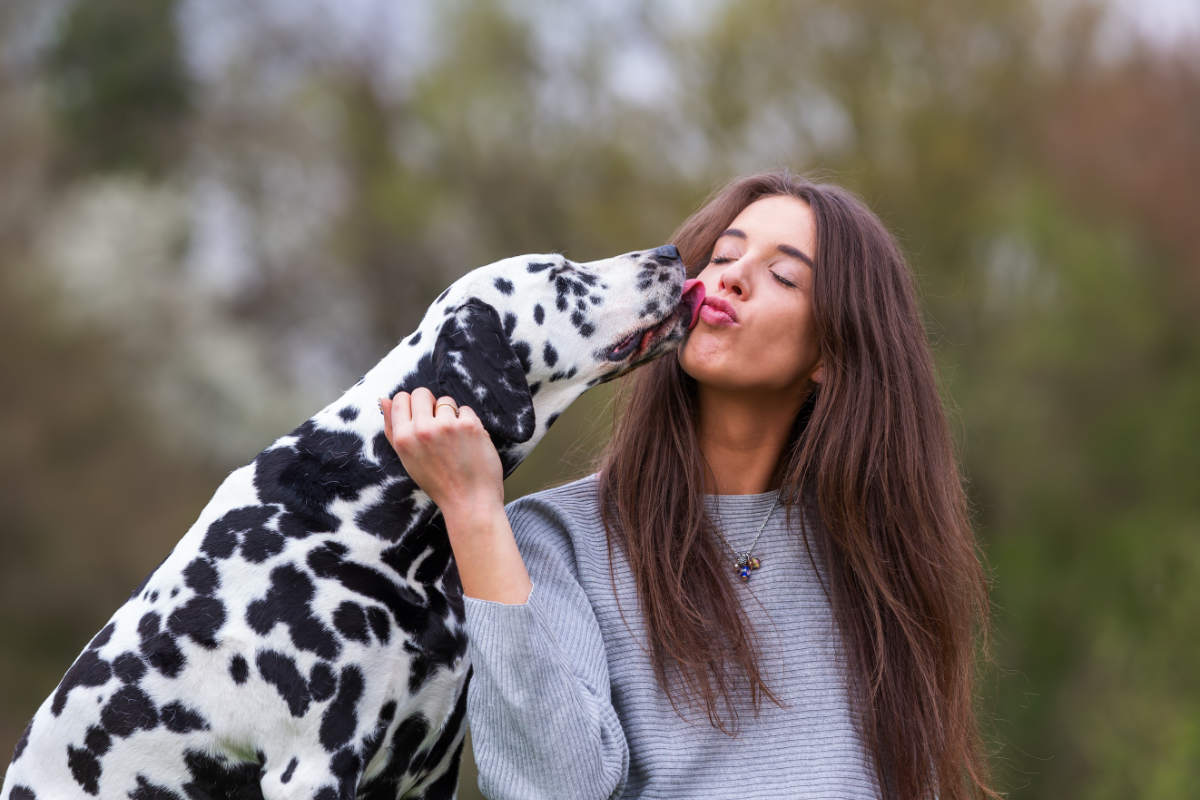 Does your dog lick you?

As pet owners, we often associate this behavior as a sign of affection from our canine companions.

If you own dogs like me, there’s a good chance they’ve licked your face, hands or feet at some stage.

In trust, there are a variety of reasons to consider, including that you just taste good, your furry friend is feeling anxious or stressed or your dog is suffering with a serious illness.

We wanted to learn more so we asked six experts: why do dogs lick you? 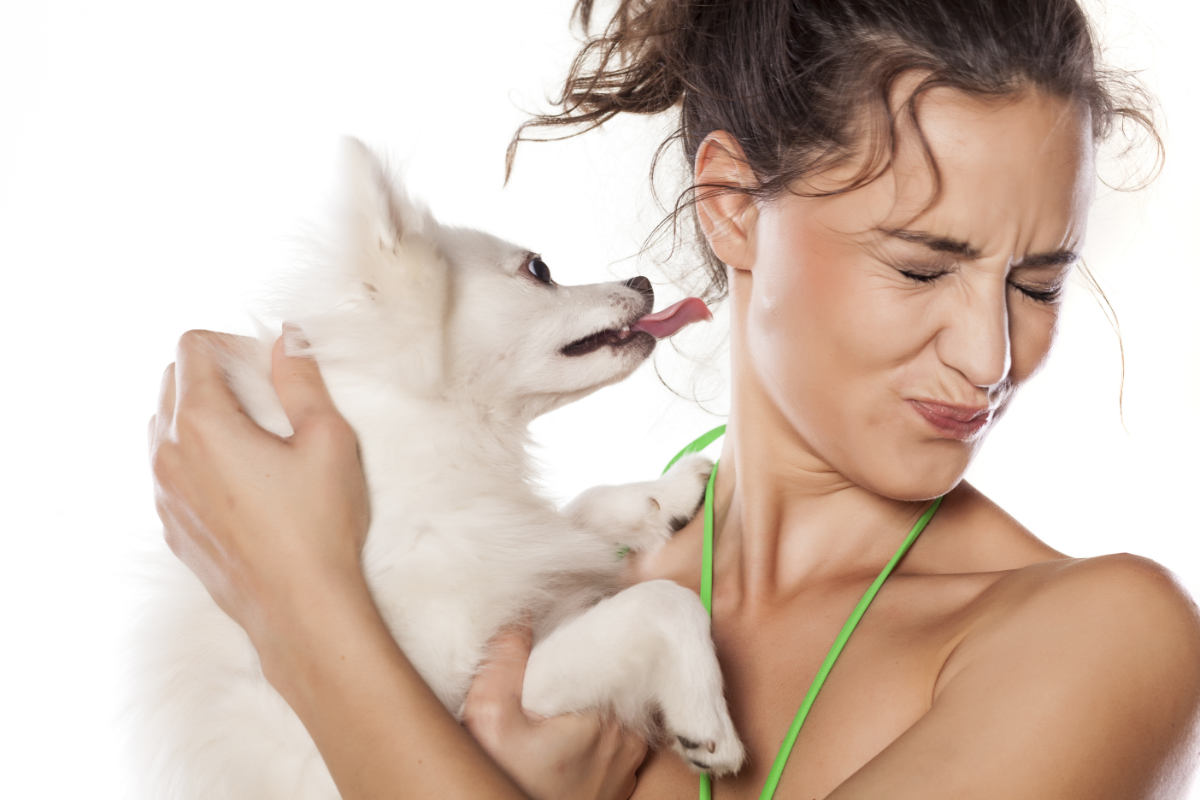 Pomeranian gets too close for comfort (Photo: Adobe Stock)

Some Dogs Lick To Push Away A Person

Licking comes up a lot with my client base – families with kids and dogs.

Dogs can lick people for a variety of reasons: affection, they can taste good (sweat, food residue, lotion), or as a stress response.

Some dogs lick to push away a person. This happens a lot with babies and toddlers. Parents mistakenly take this as love or affection when it’s actually the opposite. The dog is saying, please move away from me.

Dogs can get quite assertive with their licking and this is a huge safety red flag that parents should know about.

The Dog Is Saying, “I Am Not A Threat”

There are several reasons that dogs may lick humans.

The first and most common reason that dogs lick people, especially their owners, is a sign of affection. As many people are aware, a dog lick is considered to be the equivalent of a human kiss. Dogs communicate this way between each other, therefore, licking is the conditioned way that dogs display affection. This is especially true in the context of a dog licking its owner.

Another reason that dog’s lick, although less common, is appeasement.

When dogs are put in situations that make them uncomfortable, sometimes they will lick to try to appease the person that they are apprehensive of. Essentially, this is the dog saying “I am not a threat.”

Another reason that dogs may lick people is due to smells and tastes that may be prevalent on the skin. This may include natural pheromones, food residue, or skin products that are appealing to the dog such as scented lotions and perfumes.

As to whether or not this behavior should be discouraged, that answer lies within owner discretion. There is not typically harm that occurs to a human secondary to being licked by a dog, aside from the potential for endoparasites (which is not common in most regions). However, some owners choose to discourage this behavior because it is perceived to be gross (i.e. the saliva bothers them).

They Are Trying To Console You

Sara Ochoa, small animal and exotic veterinarian in Texas and a veterinary consultant for doglab.com

There are many reasons that your dog may lick you. These are just a few common reasons.

• They love you – Many dogs will lick you to show signs of affection.

• You taste good – If you have just eaten something or have something on your skin that tastes good, they may lick you.

• They are trying to console you – If you are upset, your dog may lick you as a way to tell you that it is okay.

• They are trying to help your wound heals – Dogs often lick their wounds to help them heal. If you have a cut or sore, your dog may lick you to help these areas heal.

While your dog licking you is not horrible, their mouths do contain bacteria that could cause a wound or cut to become infected.

Licking is a natural way for dogs to interact with each other, for example as a sign of submission, when mothers clean and bond with their puppies, or when puppies lick around their mother’s mouth to get her to regurgitate food for them.

Now that people make up most of a dog’s pack, all that licking has been transferred to us. Dogs often lick people to show affection, as a greeting, or to simply get our attention. Of course, if you happen to have a little food, lotion, or salty sweat on your skin, that may play a role as well.

Dog licking doesn’t pose much of a danger to people as long as you don’t have any open wounds and your immune system is functioning well. That said, bacteria can be transmitted through dog licks so the behavior is not completely without risk.

If you want a dog to stop licking you, do your best to ignore the behavior. Both positive and negative reactions can reinforce the behavior. Calmly get up and go into another room. Close a door between you and your dog if you have to.

Make sure you give your dog lots of praise and attention when they are not licking. Over time, the licking should fade away as your dog realizes that it is not providing them with any sort of reward.

Licking Is An Instinctive Trait

There are several explanations as to why a dog will lick someone. Licking is an instinctive trait which dogs are born with.

Many people assume that it is out of appreciation any time their dog licks them, but it may be attributed to a number of factors such as affection, taste, touch, reward, attention, obedience, medical purpose, pleasure, grooming, or simply they want to inspect you.

Excessive Licking Can Be An Indicator Of Mouth Disease

Dogs may lick for behavioral reasons including boredom, stress or out of habit.

Often time our dogs simply lick us because they like the taste of you when you’re salty from a summer day or perhaps you have the allure of barbecue after tending to the grill.

However, excessive licking can be an indicator of mouth disease.

Manipulation of the tongue could be mistaken for licking at an owner but could actually be caused by oral masses, dental disease or even foreign bodies in the mouth may cause licking behavior.

I once treated an emaciated Labrador that presented for excessive licking and it turned out that he had a large stick wedged between his upper teeth that eroded the roof of his mouth causing a severe infection and dysphagia (difficulty eating). Thankfully, once the stick was removed and he was treated with antibiotics, he recovered.

How Dogs Can Help With Mental Health