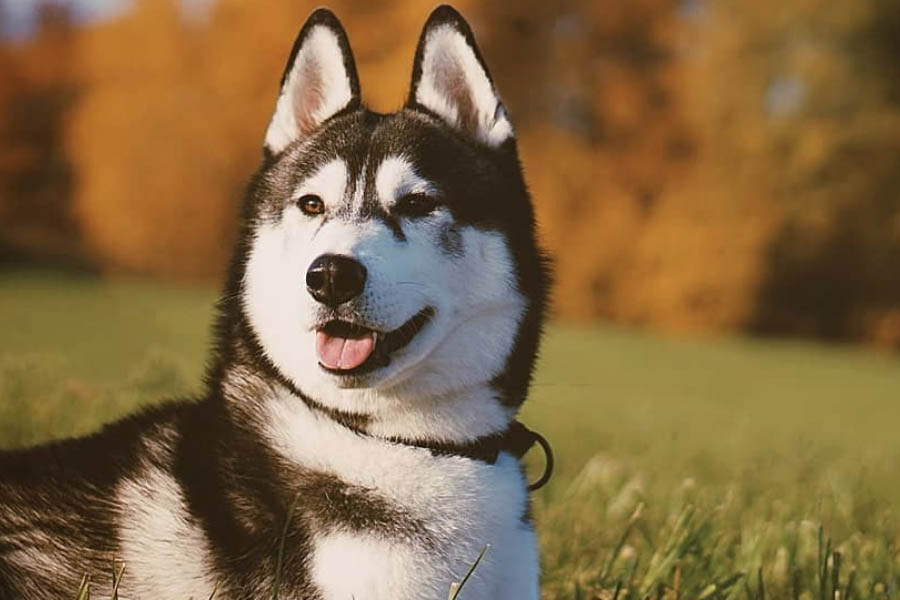 Siberian Huskies are instantly recognizable dogs due to their striking eyes and colorful coats.

The breed will usually have almond shaped eyes that can be blue, brown or mixed, as well as bi-eyed (two different eye colors) or even parti-eye (two different colors in the same eye).

Siberian Huskies are big shedders with coats that give them an elegant and sleek appearance. Their colors are usually black and white, grey and white, red and white, sable and white or all white.

They’re medium sized dogs that were built with a lot of endurance but a sleek frame for pulling light loads on sleds over long distances.

The northern breed are commonly found around the world but Siberian Huskies originated in the northern region of Russia.

They’re the 14th most popular breed in the United States but what are the pros and cons of Siberian Huskies? Let’s take a look.

Siberian Huskies are smart dogs that are quick to pick up on new commands. They’ll require consistent and firm training from a young age to ensure they learn basic obedience. Due to their high intelligence, it’s not uncommon for Siberian Huskies to try to outsmart their owners. So if nothing else, they’ll be good for keeping your brain sharp!

The American Kennel Club write on their website that Siberian Huskies should have an “innate friendliness”. The northern breed like to meet new people and new dogs. They’ve got an agreeable and outgoing temperament that means you generally won’t need to worry about these dogs being aloof or aggressive towards other pooches.

Siberian Huskies have a playful personality that can often lead to some goofy moments. They’ll love to indulge in a bit of roughhousing if they live in a home with other dogs. Sibes, as their known for short, need a lot of exercise which they like to expend during play time in the garden or the dog park.

Talkative but not loud

When you think of a Siberian Husky, one of the first things that spring to mind will be their howl. Their howl is believed to be able to travel up to 10 miles. While Siberian Huskies may like to sound their howl (some will even howl on demand), they don’t bark a lot. So they’re not overly noisy dogs like some other breeds.

Not a fan of that distinctive dog smell? Well the Siberian Husky don’t produce much of an odor. This is a trait that the American Kennel Club list as an attractive feature of the breed: “Huskies are naturally clean, with little doggy odor”.

Siberian Huskies originate in the northern region of Russia where the Chukchi people used these dogs to pull sleds to help them travel to new areas to hunt and discover new resources. Siberian Huskies are part of the tribe and developed bonds with these semi-nomadic people. This could be reason why Siberian Huskies do well with children. Note: You should never leave a child unsupervised with a Siberian Husky or any dog.

If you don’t like dog hair, Siberian Huskies probably aren’t the right dog for you. These northern dogs shed a lot – so you’ll need a good vacuum to clean up the balls of fluff that accumulate around your house. Siberian Huskies have a double coat – an inner and outer coat. The outer coat is coarse and straight, while the inner coat is soft and thick. They blow out their inner coat once or twice a year, usually at the changing of the seasons. The American Kennel Club recommend continually “raking out” the old coat, using a pin brush and metal comb. You’ll need to brush them twice a week and daily during their seasonal shedding.

Although Siberian Huskies are smart dogs, their intelligence isn’t necessarily a positive. They’ll attempt to outthink their owners if given the opportunity to do so. As with a lot of Spitz breeds, Siberian Husky owners will need to be firm, patient and persistent with these northern dogs.

Need a lot of exercise

Go With The Flou (@gowiththeflou):

If you are considering a husky, you have to have time and active lifestyle. Husky is not a couch dog you watch TV with, they need a lot of activities and training, just walking isn’t enough. You need to have good nerves and systematic approach when it comes to training. I promise that you are not going to disappoint with this breed as long as you have time and a sporty lifestyle you can include your husky too.

If you’re not a fan of the celebrity lifestyle, Siberian Huskies might be a bad match for you. Their stunning appearance means these Spitz dogs will get a lot of attention wherever you go. Introverts might be uncomfortable with the constant questions and requests to say hello to your Husky. However, if you want to come out of your shell, Siberian Huskies will help you to socialise more. They really are outgoing dogs!

Siberian Husky owners will need to ensure that their garden or backyard is secure before bringing home one of these dogs. They’ve earned a reputation as the Houdinis of the dogs world. If there is an area of weakness in your perimeter fence or a gap in the wall, you can trust a Siberian Husky will exploit it.

Carrying on from the previous point, Siberian Huskies have a very high prey drive. If they see a hare, rabbit, gopher or a squirrel, these sporty dogs will put up a decent chase. Siberian Huskies have been known to scale fences in pursuit of small animals. For that reason, many Siberian Husky owners will walk their dogs on a leash to prevent losing their pets on walks. While a Siberian Husky may be trained in recall, it only takes one time for disaster to strike.

Siberian Huskies can be relatively expensive dogs. The price can depend on their eye color or coat color. Each breeder may place an emphasis on certain traits. Siberian Huskies usually cost between $800 and $1600.

As with any dog breed, there are pros and cons to getting a Siberian Husky.

Bringing one of the Spitz dogs home is a decision that shouldn’t be taken lightly as they come with their unique set of challenges.

However, their outgoing personalities could make them a good fit for you provided you’ve got the time to dedicate to training and exercising these dogs.

If you want to learn more information about Siberian Huskies, you contact some Siberian Husky owners on Instagram to find out a little more first hand about the breed.

Everything you need to know about buying an Alaskan Klee Kai