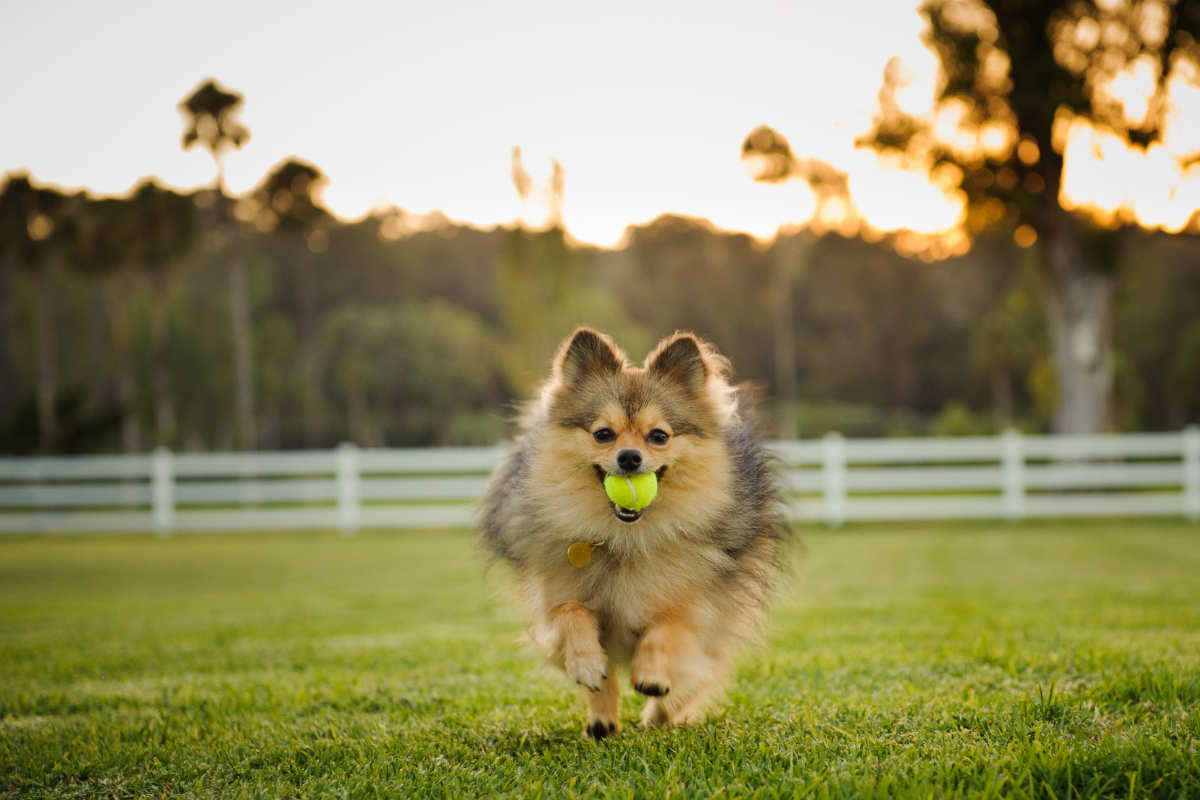 These small dogs have been by the side of their owners for a couple of centuries, even proving popular amongst aristocracy and nobility in years gone by.

Pomeranians are one of the smallest dogs in the world seeing as they stand at around six or seven inches and can weigh as little as three pounds.

Seeing as Poms can live up to 16 years, you could have this companion for a significant part of your life which allows you to develop a deep bond.

The Spitz breed have a fox-like face and they tend to be quite alert even though their small size means they’ll act more like watchdogs than fearsome guard dogs.

The Pomeranian is the rated as the 24th most popular dog breed in the United States of America, according to the American Kennel Club.

In this article, we’re going to take a look at Pomeranian pros and cons, finding out what it’s like to live with a Pom.

So with the introduction complete, let’s delve into the advantages and disadvantages of owning a Pomeranian.

If you’re a dog lover and you’re living in a small apartment but you’re unsure whether you’ve got enough room for a dog, you may want to consider the Pomeranian. They’re a small dog breed that won’t grow to a large size unlike some other Spitz breeds such as Huskies and Malamutes. Pomeranians can make excellent urban dwellers given their small size and relatively modest exercise needs. Poms will be happy with a couple of brisk walks a day, a trip to the dog park or some playtime in the home. Once they’ve got some mental and physical stimulation, they’ll be happy to curl up on the sofa and relax with their pet parents.

Anna emphasised this point on Reddit, explaining why they’re an excellent alternative to a large breed.

Poms are the best, especially if you live in a smaller space or don’t have a ton of time for walking a really large dog.

If you’re someone who likes to explore and travel, you’ll want a dog breed that is highly portable. Pomeranians can make excellent travel companions. Their small size ensures that they won’t take up a lot of room in the car – you’ll just need a small dog crate or travel dog bed. While you’ll have to keep in mind that your Pom will need potty and water breaks, the breed make for good travellers. Prospective Pomeranian owners who plan to do a lot of travelling with their Pom should consider socialising their pup as much as possible at a young age to expose them to different people and situations.

Anna shared her experience exploring with her Pom on social media.

Poms make great travel companions if you get one as a puppy and take it everywhere it is allowed.

Poms are perfect travel companions and get along great with big dogs and other pets. They are trainable but the potty part takes some work and patience. Keep puppy pads with you.

These small dogs are smart so don’t underestimate the breed! The Pomeranian was ranked 23rd in The Intelligence of Dogs. Written by Stanley Coren, the author wrote that Pomeranians will usually understand new commands in 15 to 25 repetitions and obey the first command 70% of the time or better. If you’re planning to adopt a Pomeranian, it’s a good idea to start training from a young age to lay down the ground-rules and basic obedience. Poms can be sassy, stubborn and wilful.

For instance, Phil is convinced that his Pom can understand human conversations.

He is smart, learns tricks easily, I swear he understands most conversations (ask him if he needs to pee and he does the classic Pom tilt of the head).

There’s the stereotype that small breeds live longer lives than big dogs. This is no different with Pomeranians. They can live between 12 and 16 years so you’ll have lots of time to bond and create special memories. Coty holds the record for the oldest-ever Pomeranian, who reached a grand old age of 21 years, 8 months, and 13 days. Pomeranian.org offered the following advice to ensure your Pom has a long life: “The single most important way of guaranteeing (as well as you can) that your Pom lives a healthy, happy, long life is to make sure his environment is as pet-friendly as possible”. The Pom experts went on to suggest maintaining your Pom’s healthy weight, clean living, balanced exercise regimen, neutering or spaying and proper dental care as important factors.

These small dogs can make much-loved and much-enjoyed family pets in the right environment. The American Kennel Club give the Pomeranian breed a five-star rating for being affectionate with the family but three out of five stars for being good with children. As a loving dog breed, Pomeranians will enjoy giving and receiving attention from all members of the family. However, you should supervise all interactions between your Pomeranian and children. Furthermore, it’s important to educate children on how to handle and treat a Pomeranian given their delicate size.

Website PommyMommy offered the following consideration if you’re thinking about introducing a Pom to your home with small children.

Since Pommys are toy dogs, their small size and adorable face seem to make them perfect for young ones. However, that same tiny build makes them very fragile. If your child likes to wrestle, race or is extremely high energy, a Pomeranian is probably not the right fit. Poms do love to play, both inside and out, but handling them too roughly can seriously injure them. Rough play can also frighten a Pommy, and thus inspire hostility, which can lead to barking, growling or even biting. Before bringing a Pommy home, make sure your kids are willing to respect the pup’s gentle nature.

If you’ve got your heart set on a Pom, you better be prepared for lots of hair. Pomeranians have a double coat – a thick undercoat and a coarse outercoat. These small dogs will shed all year round, but the shedding is out of control during the changing of the seasons. You’ll have to commit to a regular grooming schedule or consider the services of a professional groomer.

Separation anxiety is a chronic canine condition that can affect any dog irrespective of breed or mix. Usually it will occur as a dog owner is about to leave the home or once the front door is shut. Dogs who suffer from separation anxiety will resort to barking, howling, whining, chewing, digging and in some extreme cases defecating or urinating. Some Pomeranians could struggle with separation anxiety, although every dog is different.

One Pomeranian owner shared the extent of the separation anxiety.

He was separated from his mom too young we think, so that might be why he’s got some issues with abandonment. He can not stay home alone. I take him shopping with me frequently because of this, and he just hops in my bag and chills (unless he sees another dog, then he loses his shit for a bit). He loves my partner and myself, but he goes mental when I’m not around and is really attached to me. We’ve tried training, pills and multiple tools but nothing has reduced his anxiety – we’ve accepted it for what it is honestly.

While Pomeranian may be smart, it’s important you harness this intelligence for good. By committing to training when your Pom is still a puppy, you’ll increase your chances of having a well-behaved Pomeranian in your home. This Spitz breed has a reputation for being strong-willed dogs with a big independent streak. They’ll try to out-think you or even manipulate you on occasion. They’re too smart!

Hailey explained how her Pomeranian Pixel has figured out a way to manipulate her owners!

They can get away with anything and are masters of manipulation. Pixel has a trademark move that he uses to get out of trouble: we call it “the paw”. You can go from hulk-smash mad to completely melted in lightning speed. They practice those looks, I swear to god.

So you’ve been thinking about buying a Pomeranian for a while and you’re wondering if there are any issues that a lot of Pom owners have faced. During our research on the breed, potty training was one issue that we kept seeing crop up. It appears that Poms have a reputation for being notoriously difficult to potty train. As a small dog breed, they’re sensitive to temperature change and especially colder conditions. This doesn’t help when you want your Pom to do their final potty before bedtime and it’s raining outside. It’s a good idea to research potty training dogs before getting your Pom so you’re informed on some effective training methods.

Here’s an example of a Pom owner who needed months and months of training.

She’s also very intelligent and eager to please, so training has been very easy and she learns cute little tricks after only a few repetitions. That said, getting her potty trained was tricky. When we adopted her at 11mos old, she had been pee pad trained but we wanted her to go outside only, so it took months of consistency to break her of the habit of going inside, because she had been given mixed messages as a puppy. Unless you want her to have accidents in the house, I would recommend never using a pee pad and taking your pup out every few hours and offering a reward when s/he goes to the bathroom. 4AM potty trips are no fun, but it’s better than a lifespan of cleaning up after a poorly trained dog imo. If s/he does go in the house, pommies do make the cutest little poos, on the plus side.

Pomeranians are often stereotyped as yappy dogs. These small dogs won’t be effective guard dogs but as a Spitz breed, they’re highly alert. They’ll keep watch and if they see an unfamiliar face enter your property, you can expect them to raise the alarm. While this may not be a bad thing if you like the idea of having an extra pair of eyes to monitor your home, it can become a problem if they’re excessive barkers and you live in an apartment with neighbours close by.

One Redditor described Pomeranians as a “vocal breed”.

They ARE rather vocal though, and depending on your apartment, some neighbours can find them to be loud and yappy (they bark at everything). They are usually very intelligent and can be easily house-trained (including not to bark)… but they can be mischievous /take advantage of you if you are too soft on them.

Another Pom owner admitted it doesn’t take much for her Pomeranians to bark.

I have two little Poms, they are typically really easy going, but barky. They love to bark at everything they hear outside- I can definitely picture my girls barking at other people in the apartment complex just walking in the hallway so take that into consideration.