How My Two Dogs Helped My Mental Health 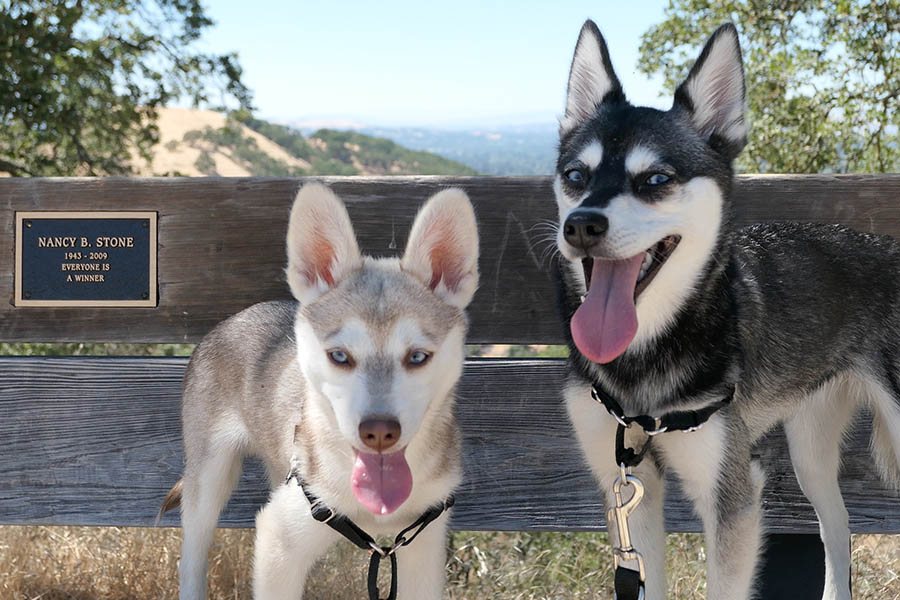 By Kieran Beckles
Updated on 17 September 2019

I didn’t suffer from my first panic attack until I was 28.

It was an intense experience that occurred days after relocating to San Francisco from London to get married to my now wife.

I was dealing with a lot of stress, including operating my business from a new country, applying for a green card in Donald Trump’s America, learning the complexities of a new tax system and adjusting to married life.

The anxiousness began as a physical experience that I equated to a heart attack rather than anxiety as my wife tried to reassure me that I wasn’t about to die.

The throbbing in my arm gradually grew in frequency and strength until it got to a point where I felt paralysed on my bed. It lasted about 20 minutes before I managed to compose my emotions and relax.

My second panic attack didn’t occur until six months later. It had happened less than 24 hours after I arrived back from Los Angeles where I had picked up my first Alaskan Klee Kai: Skye. It was triggered by a family emergency that had elevated my stress levels. I succumbed to a number of panic attacks over a four-hour spell but I distinctly remember how petting Skye helped to calm me down.

Reluctant to go to the doctor and oblivious to the possibility that I was dealing with anxiety, I suffered with frequent bouts of anxiety and occasional panic attacks for another four months before seeking help from a professional.

While therapy helped tremendously, my dogs Copper and Skye also played an immense part in my overall recovery.

Moving to San Francisco prompted a big change in my life as I left behind my business partner, friends and bustling London life. Living in the Bay Area was very different. My wife’s long daily commute meant we had limited time together. I felt isolated and my anxiety reached its peak in January 2018, nearly 11 months after I had first moved to USA. I was in constant fear that I’d suffer an attack at home with no one around to help me.

While I’m usually an open book, I found it difficult to open up about what I was going through. I felt I was letting my family down, I was convinced I was unpleasant to be around so I became insular. When you’re in a dark place struggling with anxiety, it can feel like you’re the only one who can understand what you’re going through and destined to remain in this state for the rest of your life.

My doctor encouraged me to try antidepressants and to speak to a therapist. Initially, I still struggled to cope with my anxiety and I suffered panic attacks frequently.

My dogs were my only companions during those moments of solitude. If it wasn’t for Copper and Skye, I would have spent my time confined to the four walls of my apartment fixated on the overwhelming feeling of dread. I had a big fear that I would suffer a bout of anxiety in a public place resulting in my ultimate humiliation.

Walking my dogs would force me to venture outside. While I would overwhelm myself with the “what ifs” and preemptive thoughts of anxiety, Copper and Skye were focused on the smells and sounds on their daily outings. It was a reminder to stay present and focus on my current surroundings.

In an attempt to force my mind into the present moment, I would take my dogs on daily five-mile hikes in some of my favourite Bay Area locations. I would leave my headphones at home so I could really engage with the sounds of nature rather than technology.

We’d climb to the summit of California hills and watch the wildlife all around us. The screeching sound of the eagles and vultures in the sky, watch a rafter of turkeys trying to scurry away from Copper and Skye, avoid standing on a California King Snake in the long grass or quicken our pace if we picked up an unwanted stalker in the shape of a coyote.

I felt such an incredible bond to Copper and Skye as we’d go on these daily adventures. I was reliant on them to get me out of the house and they trusted me to guide them up and down the roaming hills of the Golden State.

While it may sound simplistic, these daily hikes gradually helped me to cope with my anxiety: the rhythmic beating of heart, aching feelings in my arm and tightness in my chest. At the gym, these sensations would freak me out but this wasn’t the case on our walks. Copper and Skye would demand attention and switch my focus to them rather than my anxiety.

Of course, there were days when I didn’t have time to go on a hike. But I’d still be reminded by Copper and Skye to take them for a walk, whether I felt anxious or not. Even those less challenging walks along the Iron Horse Trail in the Bay Area still helped to reduce my anxiety levels and I managed to befriend other dog walkers who later become friends.

Talking to fellow dog owners made it apparent that I wasn’t the only one dealing with panic attacks. The thought that we’re in it together has helped me to cope in challenging moments of heightened anxiety. Talking about it wither family, friends, professionals or strangers helps.

Copper and Skye continue to provide me with a constant reminder to take a break and get outside. Whether I’m in the city or in the countryside, walking my dogs helped me to reconnect with the outside world.

Although everyone deals with panic attacks in different ways and there’s no guarantee that one method will work for you, my dogs play a vital role in helping me cope with bouts of anxiety.

Of course, dogs come with a lot of responsibility. If you’re struggling to deal with stress, bringing home a dog could even elevate those anxiety levels, especially if you don’t have previous experience with canines.

Do thorough research before you decide to bring a dog into your life – but if you’re willing to accept the responsibility of being a dog owner, they can be great tonic for the soul.