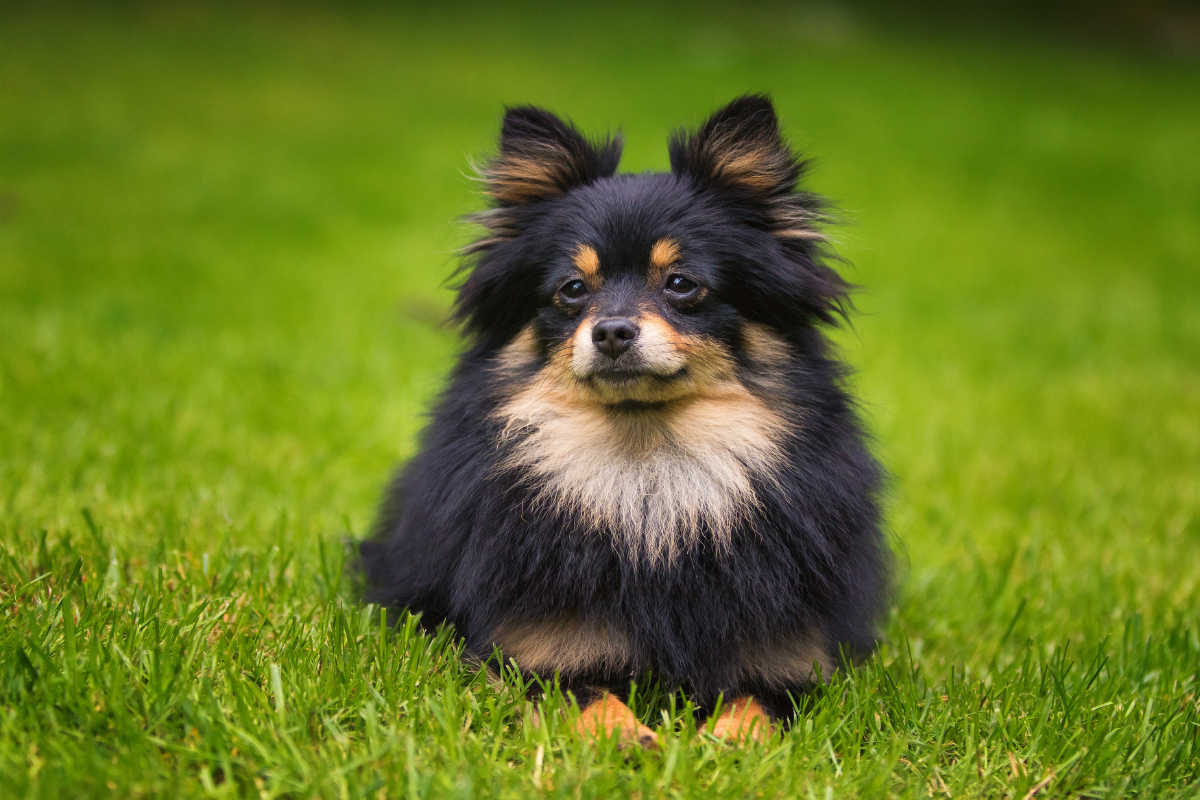 Pomeranians are a Spitz breed that are distant relatives of Arctic dogs.

Before you decide to bring home a dog, it’s important to do research about their physical traits.

You’ll need to learn about their dietary requirements, how much exercise they need and whether they’re hypoallergenic.

Some breeds have a lot of grooming requirements, which is another layer of responsibility.

Pomeranians have a double coat – an inner coat and an outer coat – that does shed.

In this article, we’re going to take a look at the shedding patterns of Pomeranians.

With our brief introduction over, let’s take a closer look at their breeding patterns.

Pomeranians are a Spitz breed of dog that are found commonly worldwide.

They’re thought to be distant relatives of an ancient Arctic breed of dog.

Pomeranians hail from the the northern region of Poland and Germany called Pomerania along the Baltic Coast.

It’s in this Pomerania region where the breed was developed and refined to resemble the Pom that we know today.

However, the Poms found in this Polish and German region were bigger than their modern day counterparts.

Queen Victoria has been credited with reducing the size of the Pomeranian from 30 inches to 6 or 7 inches.

The British monarch took a keen interest in Poms and started to breed them.

Queen Victoria was thought to be particularly interested in small red sable Pomeranian which she reportedly called “Windsor’s Marco”.

In 1891, her Marco was exhibited for the first time to create a stir within the dog community as Queen Victoria’s smaller-sized Pom enjoyed a surge in popularity.

Wikipedia cites the Pomeranian Handbook which claims the Queen Regent was responsible for a 50 per cent reduction in the Pom breed.

Other royal owners during the Victorian period included Joséphine de Beauharnais, the wife of Napoleon I of France, and King George IV of England.

The first Pomeranian club was set up in England in 1891 before the breed standard was composed for breeders to follow. In 1900, the American Kennel Club recognised the Pomeranian breed.

In modern society, the AKC writes that the Pomeranian is the 23rd most popular breed in the United States.

Pomeranians don’t shed as much as some Spitz breeds. In fact, the AKC describe Pomeranians as moderate shedders.

The Pom breed have a double coat with an inner coat and an outer coat. They’ll usually shed their coat once or twice a year at the changing of the seasons.

Pomeranian HQ is a good resource for Pom owners looking to learn more about the breed.

Usually a Pom puppy will start to shed their baby fur between the ages of four and six months. It can take a Pomeranian up to five months to shed their puppy hair. Usually by 12 to 15 months, a Pom will have its adult coat.

According to Pomeranian HQ, their coat color can change following the shedding of their pup hair.

Adult Pomeranians will shed their fur at the change of the seasons. This could be at the end of spring or the start of winter. Compared to some northern breeds or Spitz breeds such as the Alaskan Klee Kai, it’s a relatively light shed.

Pomeranian HQ go on to add that some Poms will have a complete shed during the 12 to 18 month period.

Finally, some female Poms will shed their coat once they’ve whelped a litter of pups.

Will I need to groom a Pomeranian? 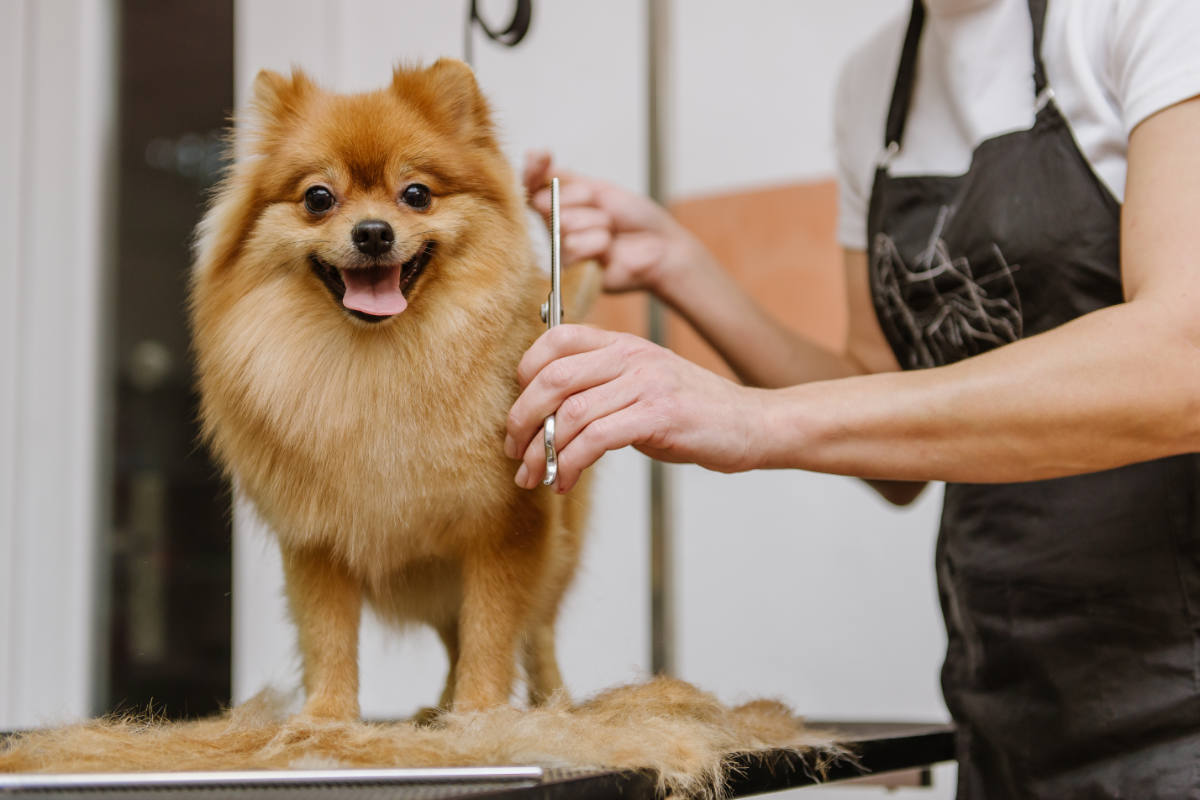 Pomeranians need to be brushed a couple of times a week.

The AKC has a recommendation on their website for Pom owners:

Frequent brushing is necessary to maintain the beautiful coat that we admire. Brush through the dog with a pin brush and a slicker brush down to the skin once a week to keep the hair from matting.

It’s recommended that you brush a Pom dog at least two or three times a week. By doing so, you can remove dead hair or debris caught in their coats.

If you don’t regularly groom your Pomeranian, especially during shedding season, it can lead to skin infections or skin issues.

A hypoallergenic dog is one that is less like to trigger an allergic reaction.

When you think of a Pomeranian, you’ll probably first think of an orange or red dog. However, they come in a number of different shades.

All colors, patterns, and variations there-of are allowed and must be judged on an equal basis.

The breed can be a variety of different colors and shades, including but not limited to white, black, brown, red, orange, cream, blue, sable, black and tan, spotted, brindle and parti.

Some Pomeranians (more commonly male than female) suffer from Severe Hair Loss Syndrome (SHLS). The coat will gradually start to thin from the back of the thighs before moving to the back.

SHLS, which can also be referred to as Pomeranian Alopercia, results in a Pom losing all their hair completely. Called Alopecia X, it’s a genetic dermatological condition that results in gradual hair loss.

Another term for the condition is the “black skin disease”.

Cost of maintaining a Pomeranian’s coat

Pomeranians can be quite an expensive breed of dog. Of course, the price of these Spitz dogs can vary from breeder to breeder.

Usually, the toy-sized breed will cost between $500 and $1500 but Pom puppies could cost more depending on their exact size and color.

While you’ve got the initial investment to consider, you’ll also want to think bout the costs on a day to day or month to month basis.

One such cost could be a trip to a groomer to help maintain the condition and quality of the Pomeranian breed.

Although a Pomeranian’s coat is a big consideration, you need to think about other grooming needs of your Pom.

The AKC offer plenty of suggestions where grooming your Pomeranian is concerned:

So there you have it, Pomeranians do shed but not as much as some other Spitz dogs.

Puppies can also shed their puppy coat between 12 and 18 months. It can take between five or six months for a Pom pup to shed its puppy coat.