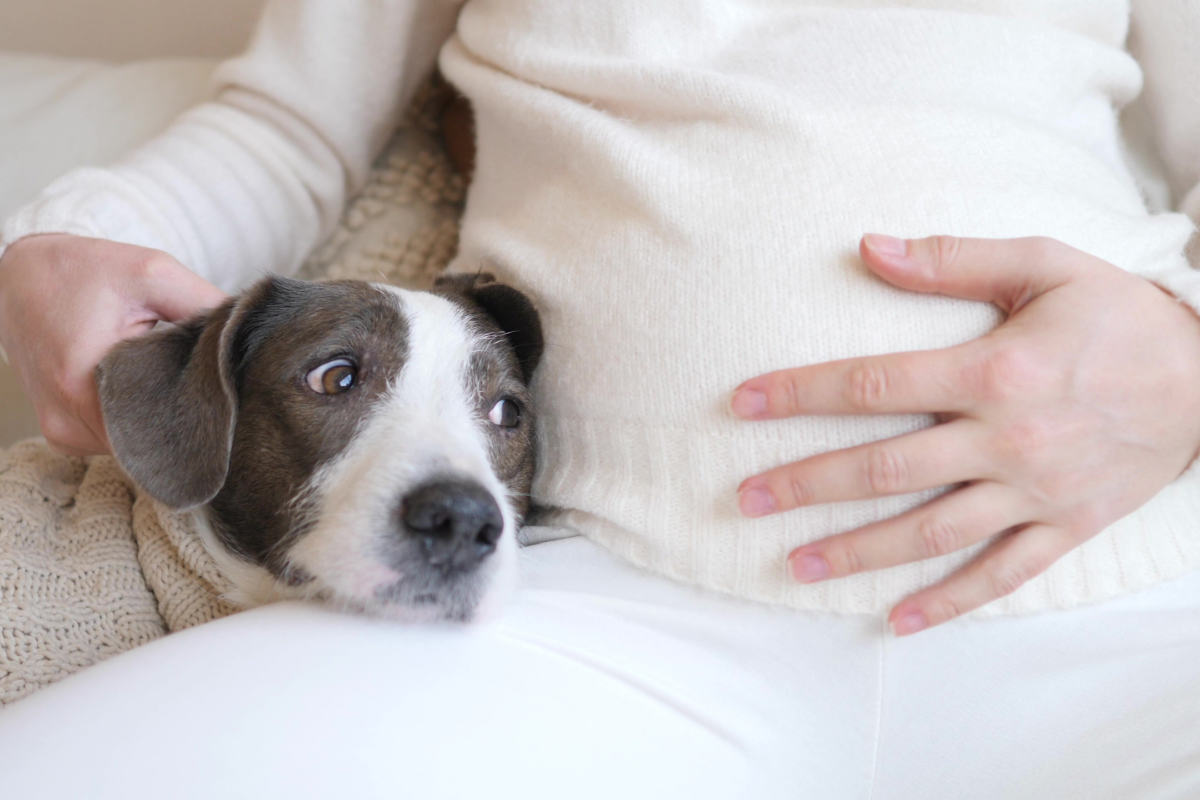 Can your dog hear your unborn baby’s heartbeat?

As a soon-to-be dad, I’ve been noting some changes in my mini huskies as my wife edges closer to her due date.

My female pup is particularly close to my wife, looking to sleep next to her belly or between her legs.

This prompted the question: can my mini husky hear our baby’s heartbeat in the womb?

So I spoke to five experts across a range of different fields to try to learn more about this topic.

Research is inconclusive. Most scientists believe that dogs cannot specifically hear an unborn baby’s heartbeat, but rather they are hearing the totality of all of the noises within the uterus, as well as mommy’s stomach noises.

Can dogs hear babies crying in the womb?

No. Research has shown that, during the third trimester, if startled, babies exhibit all of the physical characteristics of crying in the womb (facial grimaces, breathing patterns consistent with crying, and a facial settling/relaxing) afterward, scientists found that there is no audible sound. Also, the uterus is such a noisy environment with mom’s biological functions that most noises would be drowned out anyway. 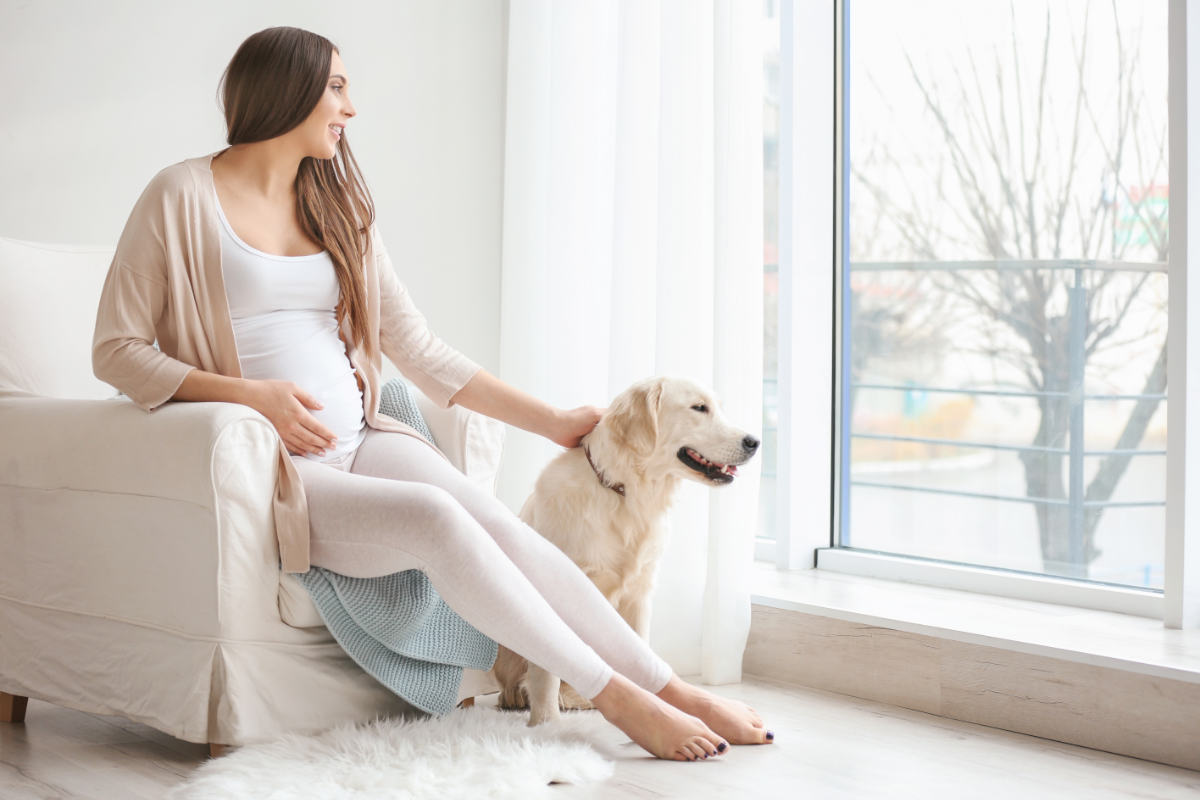 Dogs Can Hear Twice As Many Frequencies

While we can’t say for certain whether or not a dog can hear an unborn baby’s heartbeat in its mother’s womb, we can say it’s absolutely possible.

Dog’s have an incredible sense of hearing, especially when compared to that of humans

In fact, dogs can hear twice as many frequencies as we humans can hear and they can hear at least four times farther.

This suggests that not only can a dog likely hear a baby’s heartbeat in the womb, but he may even be able to hear that same unborn baby begin to cry at around 28 weeks.

Although there is no scientific evidence to support the notion that a dog can hear an unborn baby’s heartbeat, they can hear in the ultrasound range, which means there is a possibility.

Furthermore, just because dogs have a heightened sense of hearing doesn’t mean they can necessarily tune out all the other sounds going on at that time, which can make it difficult for them to hear what’s going on inside a pregnant woman’s body.

Nevertheless, dogs can tell certain things are happening because of hormonal changes, and scent.

Dogs have a much stronger sense of hearing than humans, and it seems reasonable that they could hear a fetal heartbeat, especially if you are cuddling.

Dogs also have an amazing sense of smell, and it also stands to reason that dogs can pick up on changes in body chemistry and hormones in the body of a pregnant woman. We know that dogs can sniff out cancer, COVID, prostate cancer, and abnormal blood sugar levels in diabetics.

They can also sense impending seizures and narcolepsy due to changes in body odor, so it seems reasonable that dogs could also pick up on hormone changes in pregnant women, though they also may be reacting to changes in moods and habits that occur when someone is pregnant. 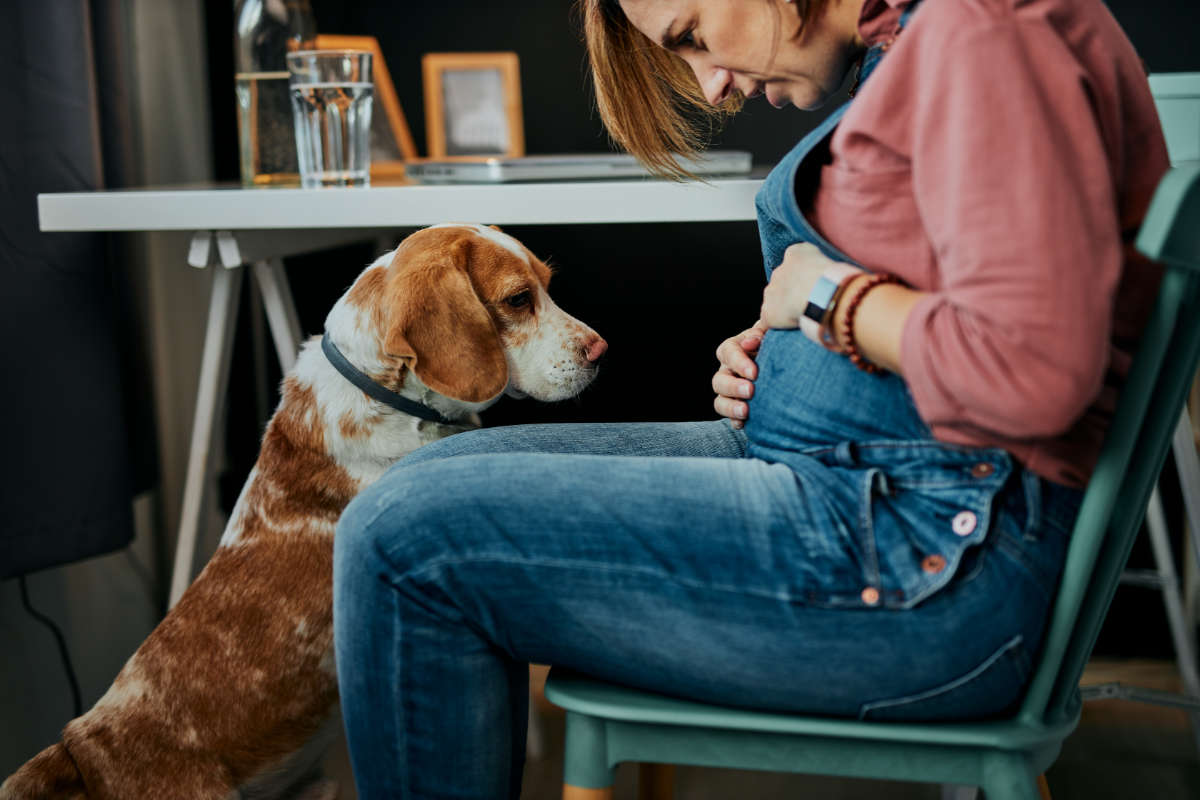 Pregnant woman plays with her dog in the office (Photo: Adobe)

Dogs Can Sense Change In The Fetus

I am often asked this question by my clients who are pregnant because the dog’s behavior changes, sometimes drastically. The definitive answer is Yes! But not only does the dog hear the heartbeat of the fetus, it can sense changes in the fetus and actually hear the baby’s thoughts once the spirit is present.

I believe because of my experiences communicating with babies in the womb, that the fetus does not get it’s soul or spirit until the last tri-mester. Since a soul or spirit is energy, and therefor it has mass, composition and density, (so does air as an example), the baby’s physical form must be developed enough to house the conscious mind and spirit.

Prior to this happening, a woman will feel movement but it is just reflexive, the same as a brain-dead patient moving. We are all born telepathic and intuitive but due to well-meaning parents who chalk up our insights to an overactive imagination, we shut it off in childhood. All animals are telepathic and they can sense things within us that we are unaware of.

It’s why dogs make such good service animals for things like seizures or diabetes – they can sense the changes in brain waves, blood chemistry and more. I believe that dogs can even smell a fetus since the fetus will have a different smell than the mother because it’s genetic make-up contains both the mother and the father. Their noses are so powerful which is why they are so helpful to humans in so many ways.

I have consulted with clients who saw an interesting, clingy change when they got pregnant and that changed in the last tri-mester once the spirit was on board. The dog would drop toys on the mom’s belly, bark at the belly and do lots of poking as in come out and play.

Since a dog’s hearing is so acute, not only can they hear the heartbeat, they often react when the baby gets hiccups in the womb, cries, or makes other noises.

Ways To Prepare Your Dog For A Baby (Expert Tips)