Aussalier: Everything You Need To Know 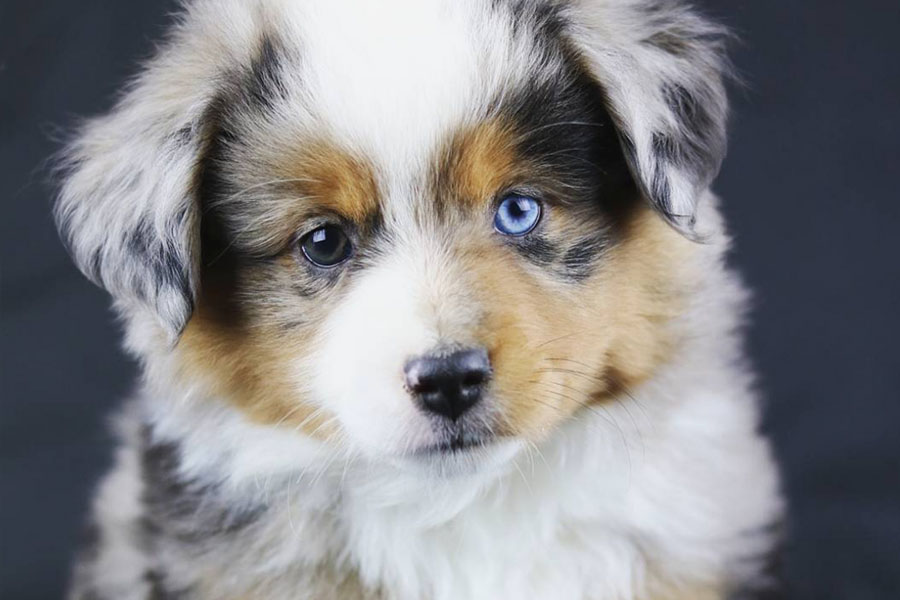 Aussaliers are a cross between an Australian Shepherd and a Cavalier King Charles Spaniel.

They’re a relatively new cross breed that started in 2013 but Aussaliers are becoming increasingly popular.

Aussalier puppies inherit traits from both parents, although there’s no guarantee which characteristics they’ll get.

In an attempt to learn more about this relatively new hybrid dog, we contacted Royal Crown Kennels to find out about their Aussaliers.

In this article, we touch on the basics of these crossed dogs, learning about their physical traits and temperament.

You can find out more about Royal Crown Kennels by visiting their website.

Aussalier: Everything You Need To Know

1) What is the history of the Aussalier cross breed? 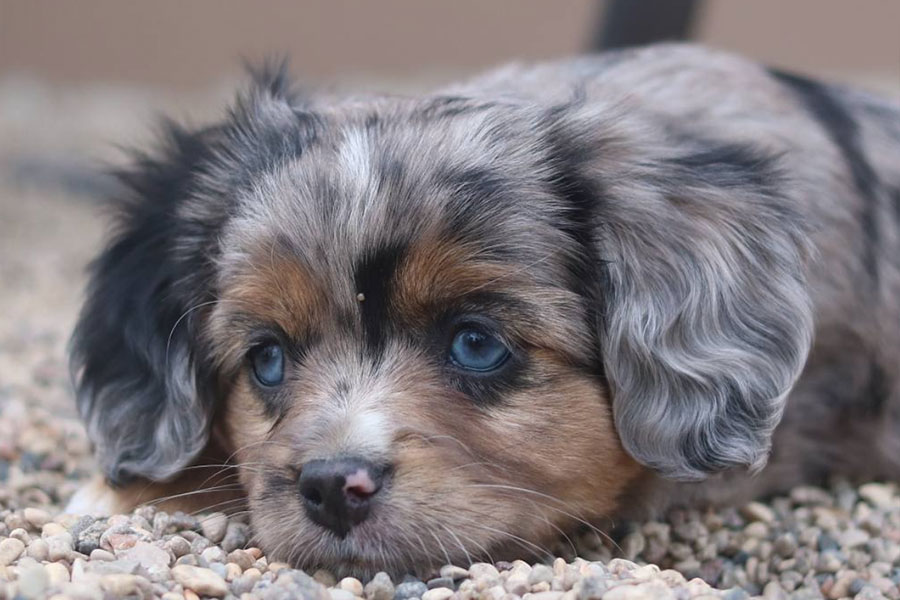 Aussaliers are a relatively new cross breed, that first showed up on the web in 2013. The litter was bred by Pinewood Cavapoos. At that time, there was little to no other information online about the mix and we really don’t have much history of them before that aside from assuming that there had been one or two random/accidental litters.

2) How did your first hear about Aussaliers? 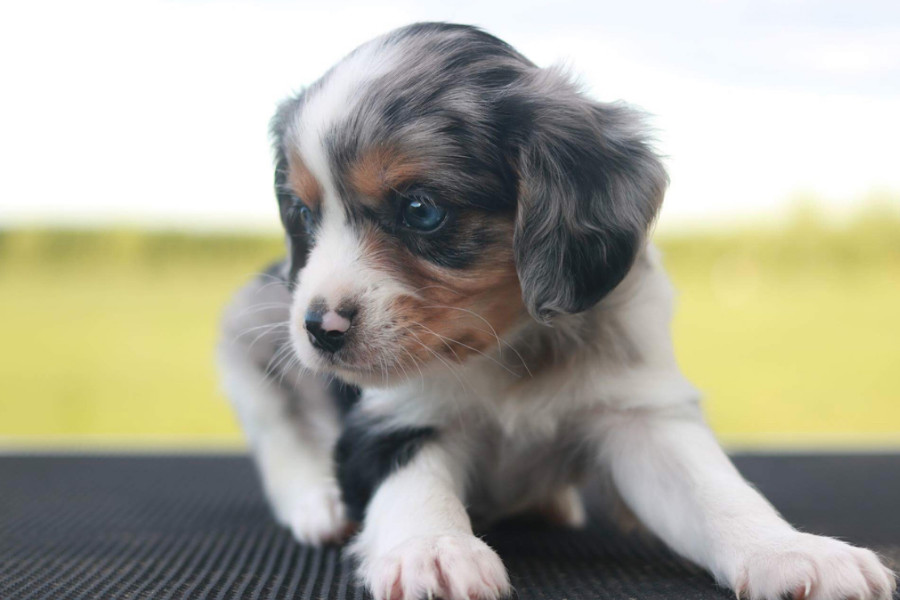 Royal Crown Kennels: I was a breeder of Toy & Mini Aussies in 2015. I also had a Cavalier King Charles Spaniel. I adored CKCS but I didn’t want to raise them because of the overall health concerns of the breed. I started noticing that lot of people that reached out to me about Aussie puppies, loved the looks/loyalty/intelligence of the Aussie but were hesitant about getting one because of their high energy, and sometimes timid nature. So when the thought came to me to cross them with a CKCS, I started researching. That’s when I came across the photos of Pinewoods litter and decided to try the mix as well. Royal Crown Kennels had our first litter in 2016. We were so delighted with the mix that I decided to raise Aussaliers exclusively.

Melly and Mellow: We wanted a cavalier. By chance we came to breed the Aussalier. Spontaneously decided to take him with him. A year later we got our second Aussie there.

3) How big do Aussaliers gets? 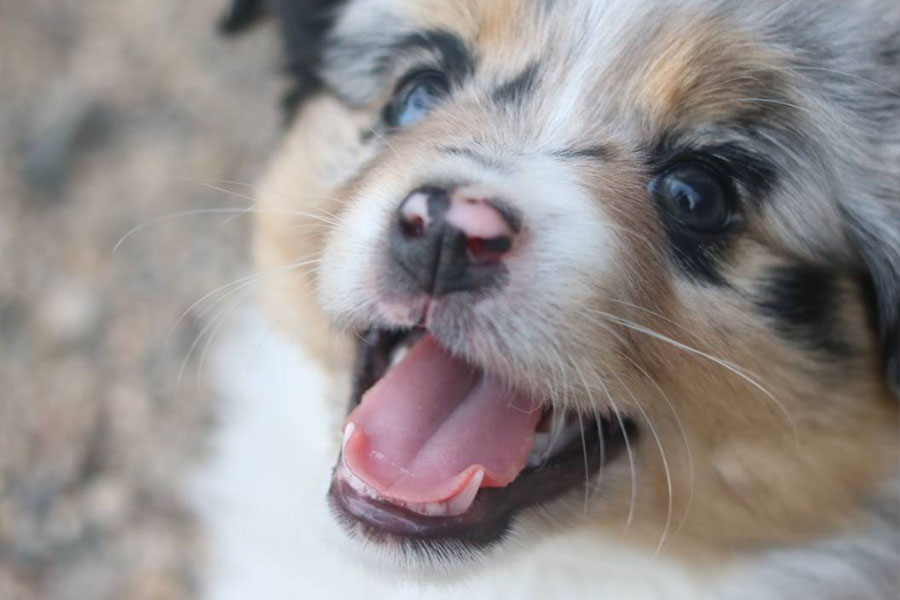 Royal Crown Kennels: Aussaliers come in a range of sizes depending on the size of the Aussie parent that is used. Aussie’s come in a few different variations (Standard Australian Shepherd, Mini Aussie, and now even Toy sized Aussies). It all depends on the size of the dogs in the Aussie parents pedigree. I have litters that stay around 10-15lbs mature, and ones that mature around 25lbs. Our smallest Aussalier so far is 8lbs, and the largest is 30. Your breeder should have an estimate of what size to expect from an individual litter.

4) What are the coat colors of Aussaliers? 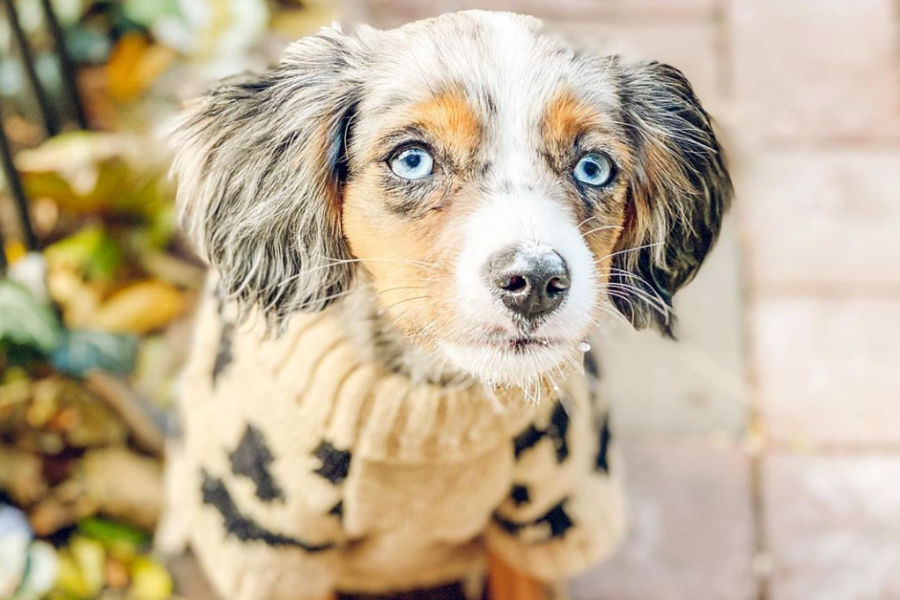 Royal Crown Kennels: Aussaliers come in a few different color variations depending on the genetic color of the parents. In General, you will see two different variations Merle and Tri-Color. Because this is a mixed breed there is potential for the puppies to inherit a number of combinations of color & patterns based on the parents colors. So far we’ve seen Merles, Tri-Colors, and Blenheim Aussaliers. All with a range from no white to lots of white.

5) Can Aussaliers have different color eyes?

Royal Crown Kennels: Yes, Aussaliers have a range of eye colors from Amber, Brown to Icy Blue. They can have different colored eyes, 2 of the same, and even partially colored!

6) What is the temperament of Aussaliers? 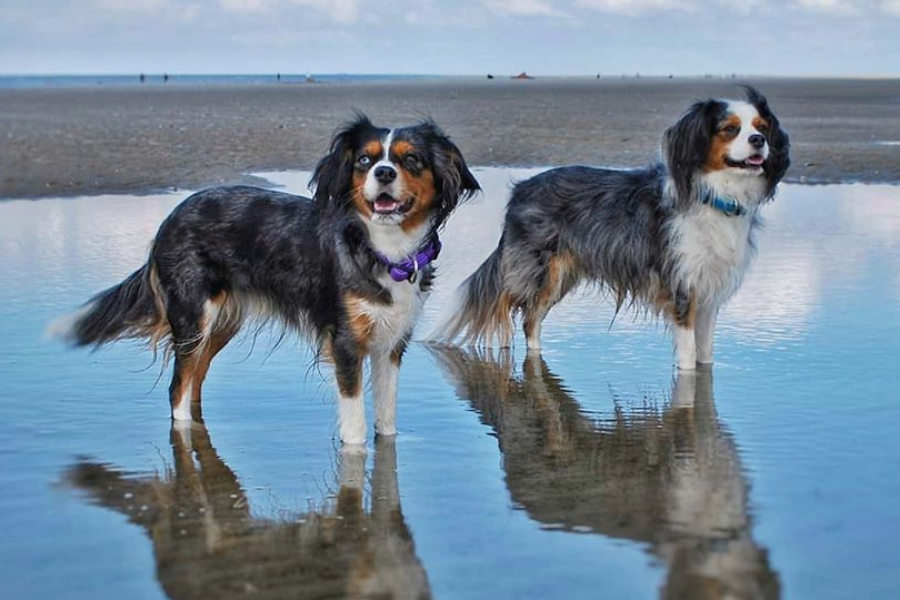 Royal Crown Kennels: This is a mixed breed, so the temperament of an Aussalier can range from high energy like an Aussie, to low energy of a Cavalier. Typically though, they can be described as active, and playful dogs, that bond very closely to their owners and families. They are very smart, and loyal. These dogs are perfect for a person who wants a companion. They love to go everywhere with you. Be sure to socialize them well as puppies so they don’t become standoffish with strangers. Most are happy go lucky and love everyone they meet. They are affectionate, and loving but be sure to keep some structure, and routine so they don’t become too attached to you. They aren’t overly vocal dogs except when excited, or bored. Be sure to ask your breeder about the temperament of the parents. They should be taking great care to only use dogs that have exceptional temperaments.

Jojo: I love to go on hikes, walks, play with other dogs and be social like an Aussie while also following my parents around and cuddling with them in bed like a loyal King Charles. I’m shy at the dog park but extremely social 1:1!

Koda and Oakley: Aussaliers are such loving and happy dogs. The Aussalier is a perfect combination of energy and cuddles. They reflect how you are feeling that day. If you get excited, they will be energetic with you. But if you are having a lazy day, they are happy to lay on the couch with you. They do require some exercise to stay happy! One of my Aussaliers loves running with me, but is also happy having a movie marathon.

7) Are you able to pinpoint traits of each parent in an Aussalier? 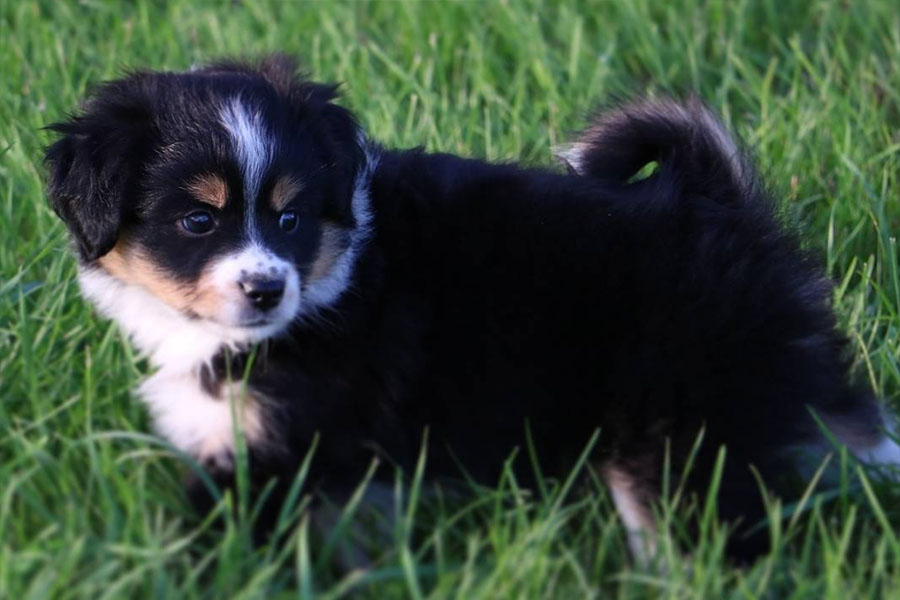 Royal Crown Kennels: Yes, very much so. It’s almost uncanny how well I can tell the different traits of each litter depending on the parents. Both in conformation and Personality! 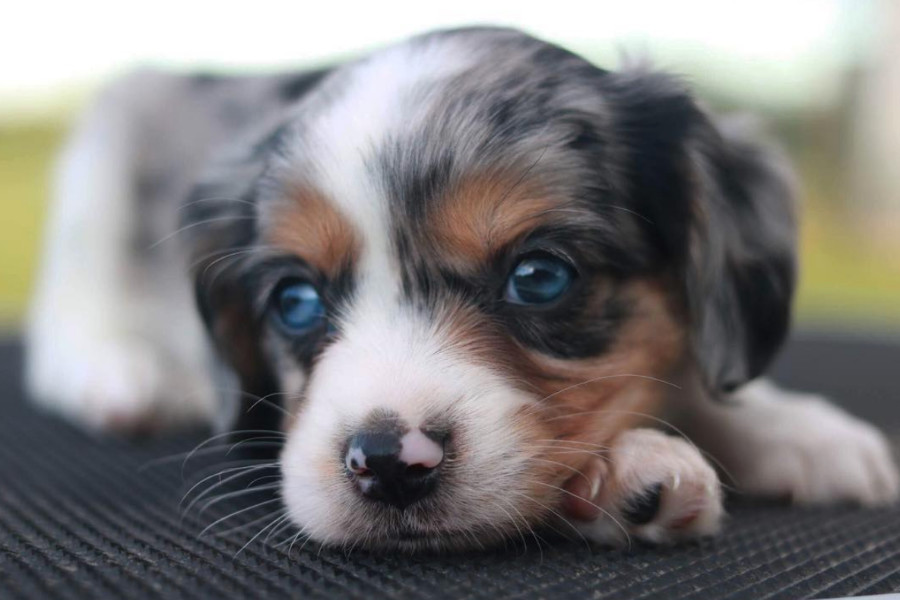 Royal Crown Kennels: Absolutely! Aussaliers are active and playful and they LOVE to run around the yard with the kids! Especially if they are willing to throw the ball 🙂 They will tend to gravitate towards one person in the family. Usually whoever is spending the most time with them, training, feeding, caring for, etc. Aussaliers will bond very closely with you if you engage their mind and praise them lots during training sessions. Have the whole family join in to teach your Aussalier some fun tricks!

9) Are Aussaliers good with other dogs? 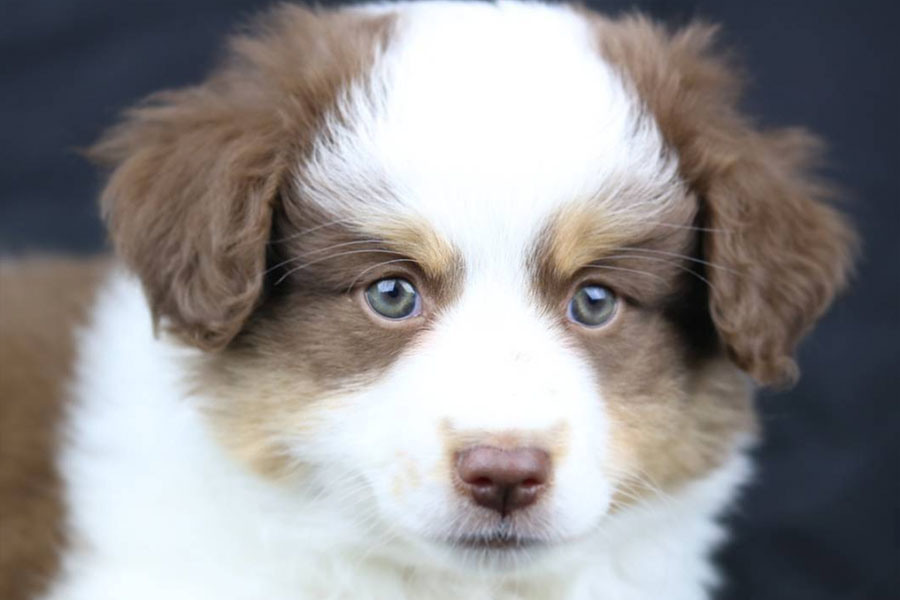 Royal Crown Kennels: Yes! Aussaliers are happy and fun dogs who would love to spend the afternoon at the dog park. As always start socializing your Aussalier with other friendly dogs early and avoid scary situations that might make them apprehensive/timid.

Koda and Oakley: Yes! Aussaliers are extremely social and love playing and being around other dogs. I would say they do prefer playing with dogs their own size (can get a little skiddish around big dogs). A lot of this does come down to owner socialization though.

Sadie: She seems to have the Cavalier trait of loving everyone. She does great around all people and dogs! 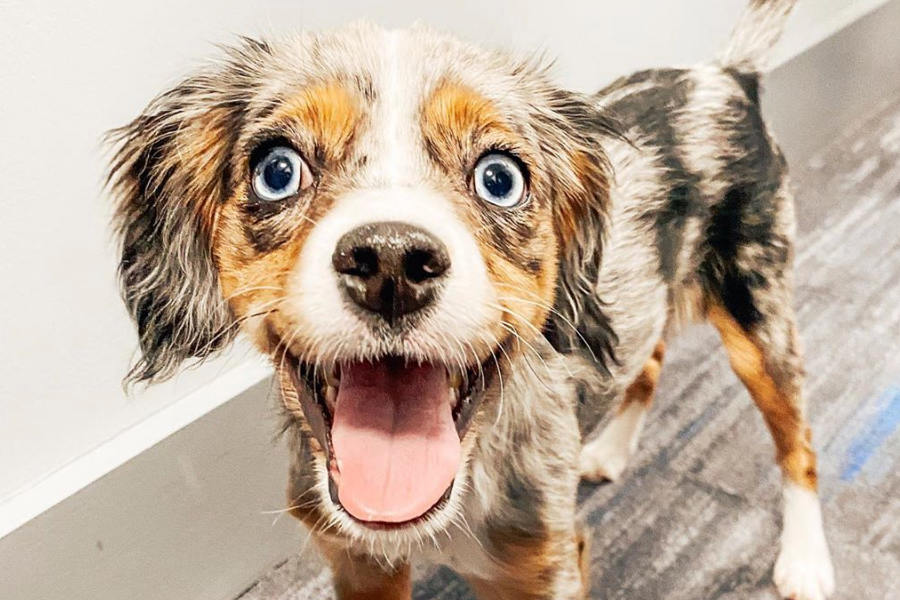 Royal Crown Kennels: Aussaliers CAN be good apartment dogs if they are getting enough exercise, and companionship. There are quite a few Aussaliers living the high life, right in New York City. In-fact, those dogs are often the most content because their owners walk with them, take them to dog parks, dog friendly restaurants, and even to work! It’s all about how much you engage with your Aussalier, and less about the size of your yard. They are not couch potatoes, and will not be happy locked in a kennel all the time and not given some one on one attention. They are bred to be companions.

11) Are Aussaliers easy to train? 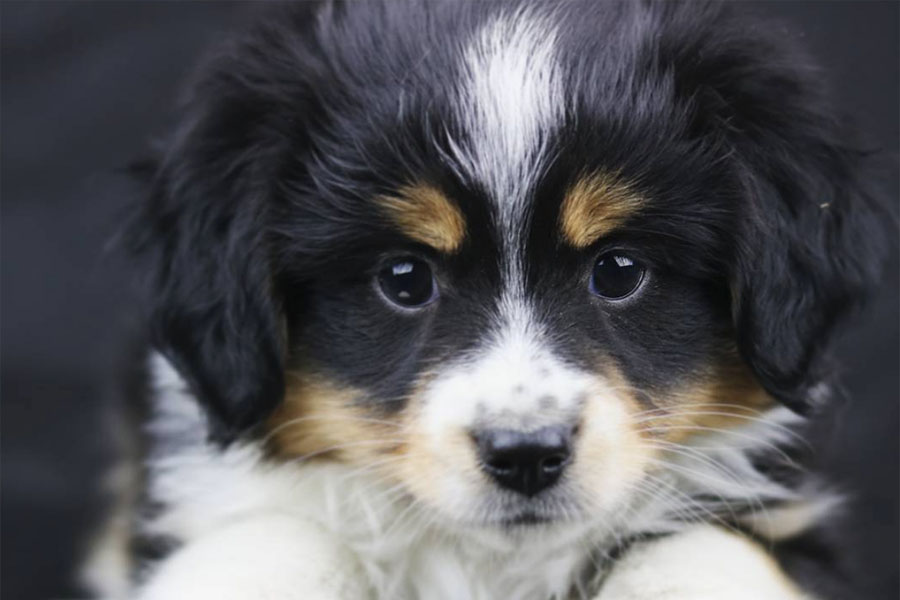 Royal Crown Kennels: They are VERY easy to train. Intelligent and eager to please. They love learning. Positive re-inforcement with methods such as ‘clicker training’ are very effective. But be sure to set boundaries and don’t let them break the rules just because they’re cute! They can be “Too Smart for their own good” so to speak, if they don’t get enough guidance. 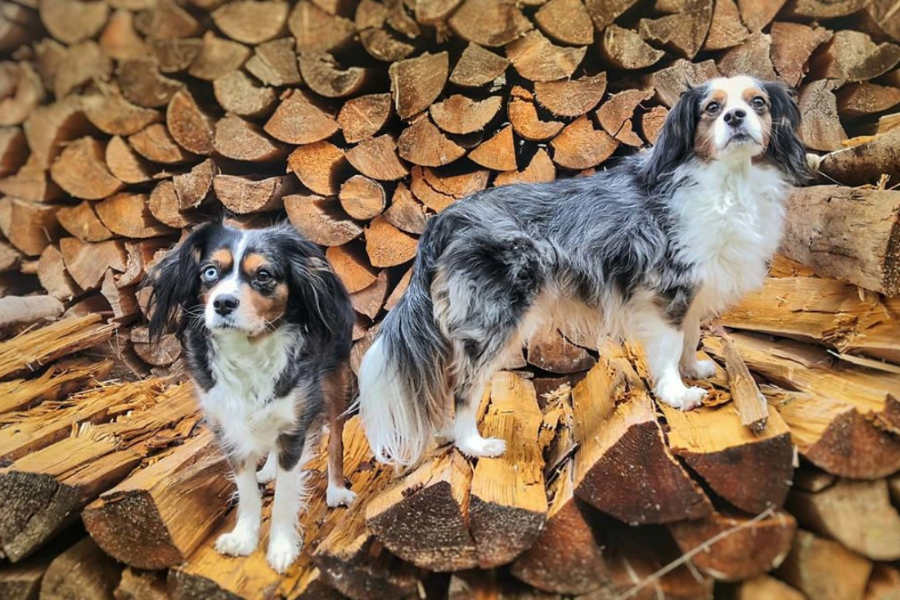 Royal Crown Kennels: No. They come from two breeds that are moderate shedders that have lots of dander. 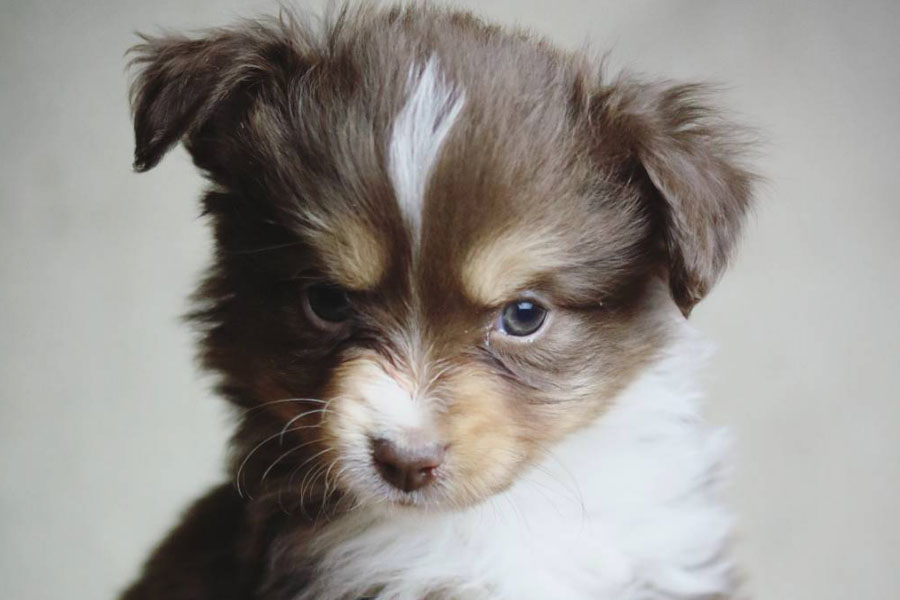 Royal Crown Kennels: Yes, They come from two breeds that are moderate shedders. You will need a vacuum!

Jojo: A few hairs here and there but not too much! I would say no!

Sadie: Although both Aussies and Cavaliers shed were have found that our Aussalier sheds very little so far.

14) Do Aussaliers have any grooming needs? 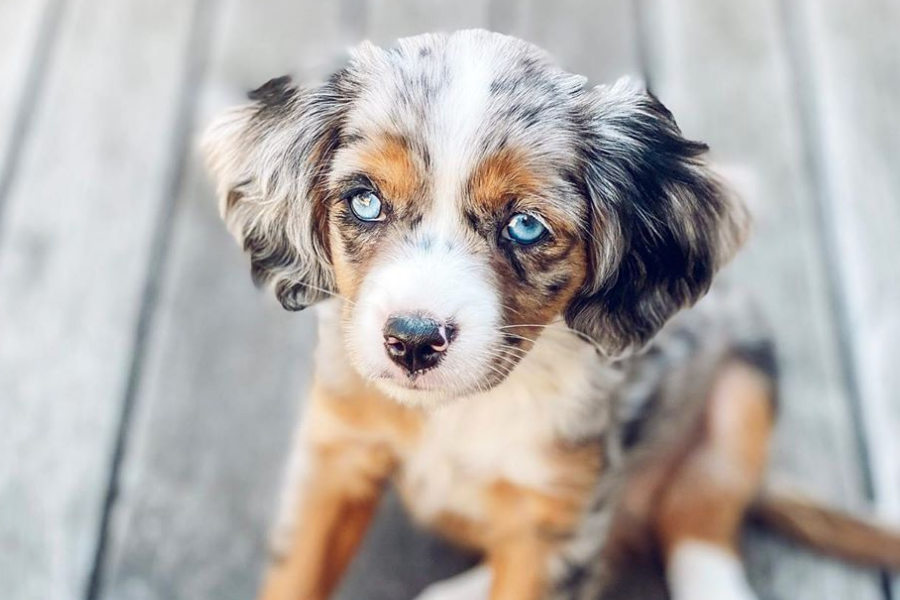 Royal Crown Kennels: Aside from brushing their coat out occasionally and bathing as needed, they don’t need much grooming.

Koda and Oakley: Aussaliers require brushing and some trims. They really only shed twice a year with season changes and it never gets that bad; the brushing really helps a lot with the shedding. Also, brushing is good to make sure they don’t get any mats behind their ears. The trimming is more of a personal choice! Their coat is also SUPER soft.

15) Do Aussaliers need a lot of exercise? 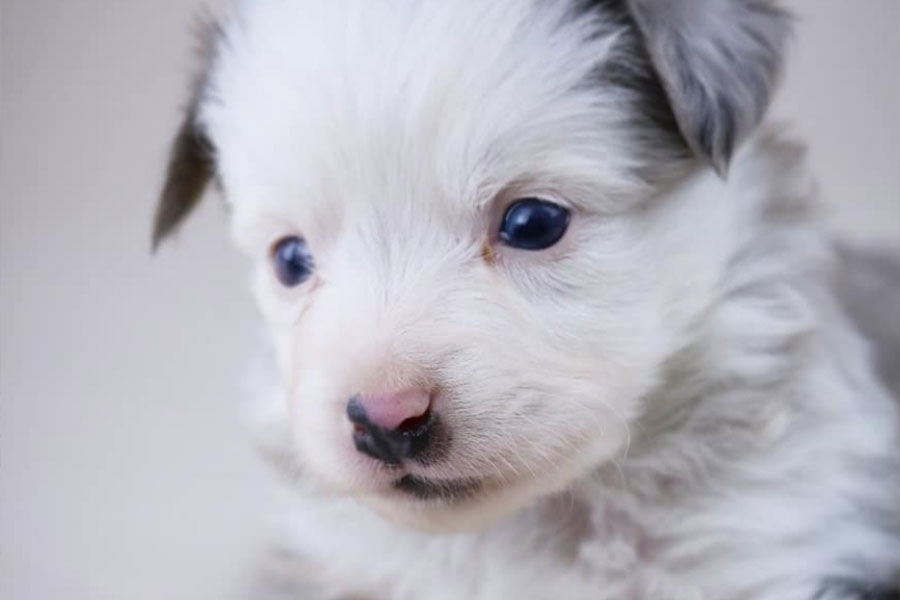 Royal Crown Kennels: Aussaliers do require physical exercise to be content. While the Cavalier in them does tame down the intensity of their Aussie side, they are still active dogs that thrive with moderate exercise. Teach them to fetch, and you’ll have an easy way to run off any excess energy before going inside to lounge on the couch.

Sadie: She loves to play fetch, chase, and go on walks. Cavaliers are very low energy and Australian Shepherds are higher energy. We find her to be a good mix. She enjoys exercise but doesn’t get into trouble without it.

16) What is the life expectancy of Aussaliers? 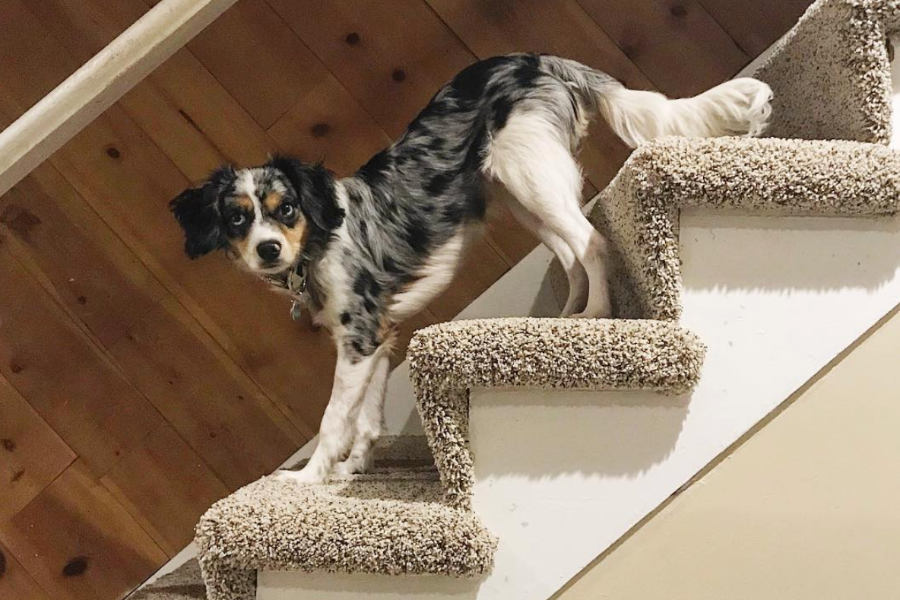 Royal Crown Kennels: This is still such a new mix that we don’t really know what the life expectancy is yet. Our best guess is that they will likely have a life expectancy around 12-13 years

17) Do Aussaliers suffer from any health problems?

Royal Crown Kennels: The Aussaliers that we know of out there are still young and healthy, so we don’t have any concrete data on this quite yet. Breeders should be doing the suggested health testing for both the sire and dam to decrease the risk of genetic health issues. By crossing the Cavalier to an Aussie, we are increasing the genetic diversity of the offspring. This is called “Hybrid Vigor”. The offspring of two genetically diverse individuals are likely to be healthier since the genes don’t overlap. Aussaliers should be kept at a low weight. Obesity could be particularly hard on an Aussaliers hearts and joints.

18) How much do Aussaliers cost?

Royal Crown Kennels: They range in price anywhere from $800 to $2,000. Puppies from breeders who health test, have health guarantees, and put significant time/love/energy into every litter are going to be more expensive.

Melly and Mellow: My dogs cost €550 each. They were sold as hybrids. The parents were completely examined and healthy. Other costs are normal, as with other breeds.

19) Are there a lot of Aussalier breeders in the USA?

Royal Crown Kennels: There are only a few Aussalier breeders in the US so far, although there are more and more starting to have litters.

20) Do Aussaliers suffer from a separation anxiety? 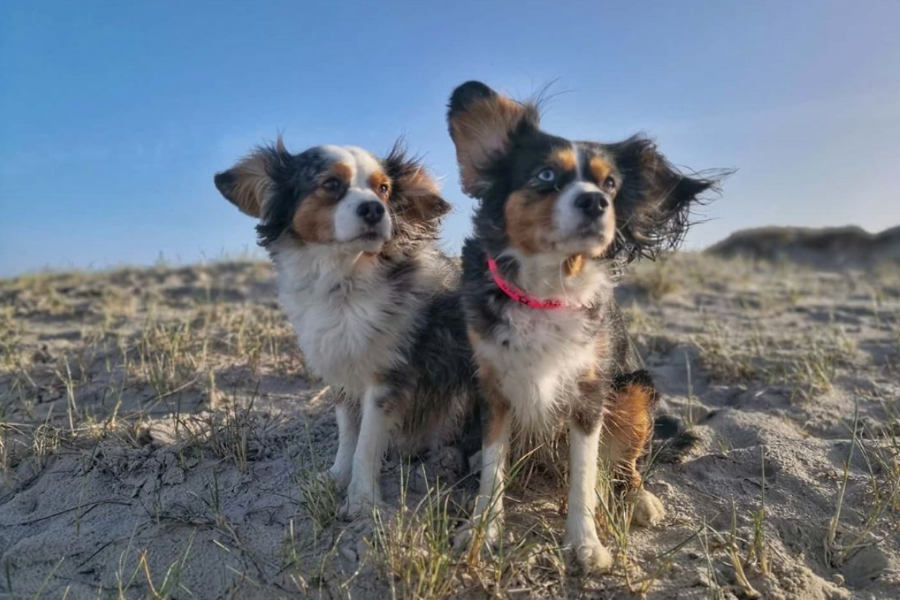 21) Are Aussaliers fussy or picky eaters?

Sadie: Our Aussie eats the dry food we give her and loves treats. We did need to give her rice once when her tummy was upset and she would not eat it.

Sadie: She barks at birds and from the front window when someone walks by. For our Cavalier it was squirrels and dogs out the window. I think that is normal for all dogs so we don’t find her barking excessive. Otherwise she is quiet!

22) Would you recommend Aussaliers to first-time owners?

Royal Crown Kennels: I would recommend an Aussalier for a first-time owner! They are super smart, so easy to train. And make really amazing companions. Great balance of loving and energetic.