Finding the right dog breed for a first-time owner can require a lot research.

helloBARK! must stress that each individual dog is different, even if the breed has a reputation for certain characteristics. This article doesn’t constitute expert advice and if you’ve any questions or queries, you should contact your local vet or dog training expert.

Indeed, it can be an overwhelming experience as you look into the pros and cons of each individual breed.

For all the positive comments you encounter online, there will inevitably be some horror stories that will leave you feeling apprehensive.

A large proportion will be first-time owners who will probably have encountered some challenges and pitfalls.

Almost eight million dogs end up in an animal shelter every year for a variety of different reasons.

Whether you plan to buy a puppy from a reputable breeder, adopt a mixed breed or rescue a dog from a shelter, you’ll have a number of factors to consider.

Things to consider before getting your first dog

Lifestyle: You’ll want to find a dog that suits your lifestyle – whether you’re someone who spends most of the day at home or have work commitments like most of the world.

Space: Do you have room for a medium or large sized dog? If not, do you have the means to provide them with regular exercise. A tired dog is a happy dog!

Exercise: Is your yard suitably secure to ensure breeds with a reputation for being escape artists don’t manage to break free? If not, you’ll want to take steps to up your security.

Easy to train: Stubborn breeds will require consistent training, while dogs with a high IQ will be quick learners but require a lot of stimulation.

Sociable: If you’re someone who has a lot of visitors, it’ll be imperative that your dog is sociable and likes to meet new people.

Family pets: Should you have young children at home, you’ll want to make sure your breed do well with children. Dogs will a loving and patient temperament will be a good fit. You’ll want a dog that is robust and doesn’t require delicate handling.

Expensive: With dog food, pet insurance, trips to the vet and doggy daycare all potential costs, you’ll have to make sure you’ve got the budget to bring home your first dog. They can be expensive!

Yorkshire Terriers are very common – and there’s a good reason why these dogs are a big hit. They don’t require a lot of exercise and are satisfied with short walks a couple of times a day. They’re low maintenance but do require regular grooming to prevent their coat from becoming tangled and matted.

Boxer’s have earned a reputation for being great family pets. The breed are playful but loyal to their owners. They do well in a family setting due to their versatility. They enjoy the company of humans – and despite their size, like to be lap dogs. They’re energetic dogs so require regular exercise to deplete their energy levels.

These small dogs make a good option for first-time owners. Their coat is one of their standout features but doesn’t require a lot of maintenance despite its appearance. Regular brushing will suffice. They’re sweet dogs but Pomeranians do require quite a bit of training to establish ground rules. They’re companion dogs so will demand a lot of attention from their owners. If you’ve got sufficient time to devote to a Pomeranian, they’re a great choice.

Another toy breed that are often described as a good option for first-time owners are Shih Tzu. These dainty pups don’t require too much training, so are ideal for those with limited experience of dogs. They’ve got a fun personality. Shih Tzus require a moderate amount of exercise because of their energy levels. Their coat does require regular grooming.

From a toy breed to one of the largest dogs in the world – the Great Dane. Often described as gentle giants, Great Danes have a reputation for being affectionate and patient dogs. They like to relax and take naps. In spite of their size, Great Danes don’t require as much exercise as you might thing. A couple of short walks a day can suffice. However, they’re big dogs so space is required to accommodate these giants.

Another big dog that is considered to be a good option to consider for first time owners is the Bernese Mountain Dog. They’ve got a high IQ and rank within the 30 most intelligent dogs in the world. Bernese Mountain Dogs have a mellow personality and the American Kennel Club recommends 30 minutes of exercise a day for these big pups. However, they do shed a lot. 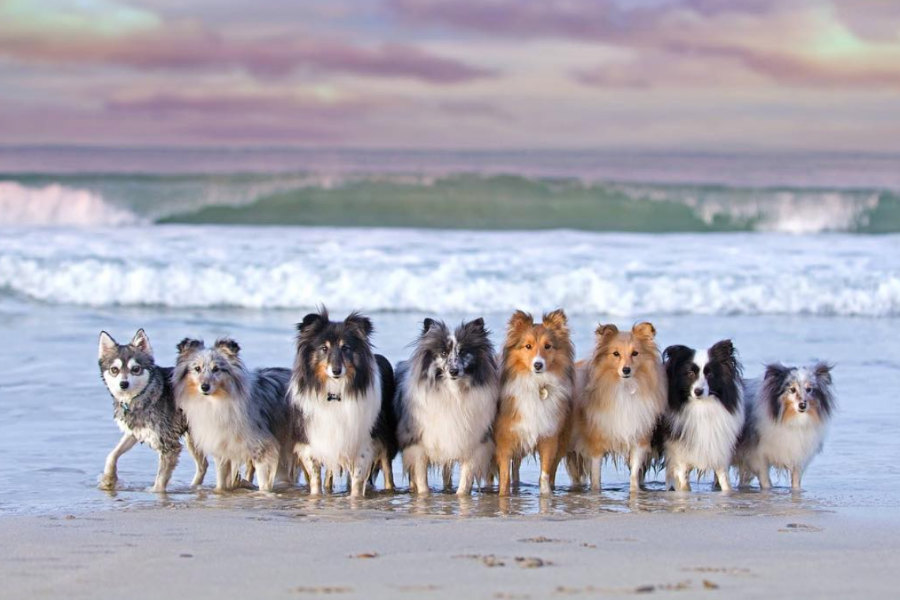 Hailing from the highlands of Scotland, the Shetland Sheepdog received worldwide acclaim thanks to the heroics of Lassie on our TV screens. Shetland Sheepdogs are easy to train thanks to their high intelligence levels. However, they require a lot of mental stimulation and they don’t like to be left alone for long periods.

A firm favourite of the dog world, the Golden Retriever ranks in the top 10 for most popular dogs and most intelligent dogs. They’re affectionate and loyal, as well as quick to learn new commands. They’re require a moderate amount of exercise. They make great family pets due to their loving nature and robust physiques.

The second most intelligent dog in the world, the Poodle is easy to train and quick to learn new obedience skills. While there is no such thing as a 100 per cent hypoallergenic dog, for first-time owners with an allergy to dogs, the Poodle’s low shedding coat could represent a good option.

The Cavalier King Charles Spaniel is often described as the quintessential lap dog. The breed are affectionate and loving, which has made them a hit throughout the centuries with nobility, celebrities and the population worldwide. They require between 30 and 60 minutes of exercise a day. They’re coat requires regular brushing to prevent it becoming tangled.

Often crossed with the Cavalier King Charles Spaniel to create the Cavachon, the Bichon Frise is a firm favourite with first-time dog owners. They make great companion dogs and love to be in the company of humans. The Bichon Frise is a versatile breed and can do well in most environments.

One of the best known dog breeds in the world, the Pug’s origins can be found in Asia. They’ve earned a reputation for being lap dogs through the centuries. Pugs are usually friendly and sociable little dogs. However, potential owners should be aware of the health problems that the breed can suffer from, particularly respiratory issues.

The Whippet’s popularity has risen in recent years, thanks in part to Kylie Jenner and her two whippets called Bambi and Norman. Like Great Danes, they’ve got a reputation for being “couch potatoes”. While they require a couple of walks a day, these don’t have to be too long. They’re sprinters, not marathon runners!

The most popular dog in the world, the Labrador Retriever has earned a reputation for being the quintessential family dog. With a bright and charming personality, affectionate but loyal and quick to learn commands and grondrules, the Labrador Retriever is a great option for a first-time owner. They do require regular exercise to deplete their energy levels.

Greyhounds are known as racing dogs, but you may be surprised to learn that they require just a moderate amount of exercise rather than multiple long walks a day. They’re a gentle breed that love nothing more than to cuddle up on the couch and stretch their dainty, long legs.

Originally coming from the Mediterranean region, the Maltese is a popular household pet worldwide. They were bred to keep humans company, so it shouldn’t be a surprise that they make great lap dogs. They don’t require too much exercise. However, their delicate nature makes them a better fit for homes without young children.

Perhaps best known for their trademark butterfly ears, the Papillon can double up as a lap dog but companion for jogs and walks. They love to be around new people and are sociable little dogs.

If you’ve decided you’re ready for your first dog, you may want to consider a mixed breed or a rescue dog. Admittedly, mixed breeds can be challenging at times, but they can also boast the best personality traits of the respective breeds used to create the dog. With consistent and regular training, especially with help from an expert, they can make great first dogs.

Your ultimate guide to airline policy on emotional support animals