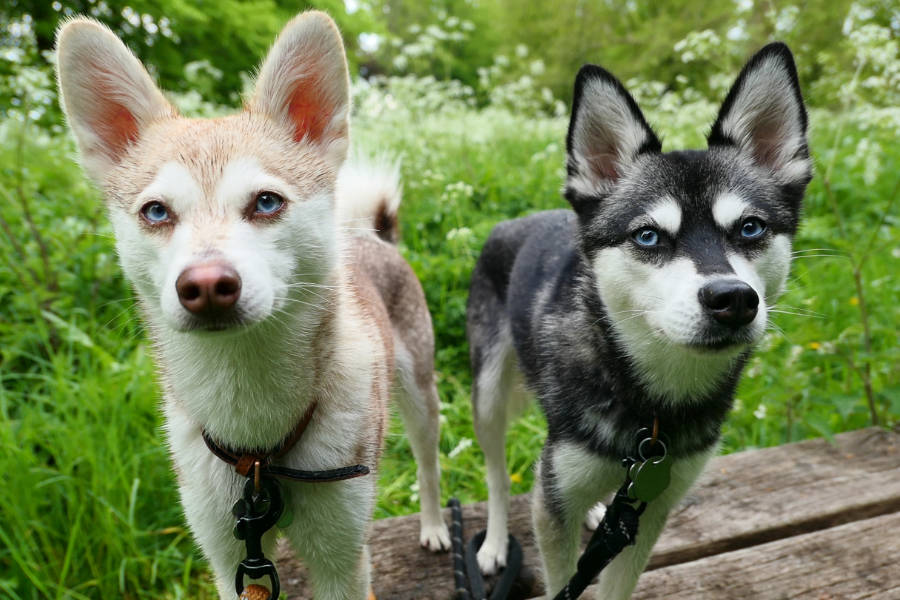 By Kieran Beckles
Updated on 23 November 2019

I got my first Alaskan Klee Kai almost two years ago.

My wife introduced me to the breed and we decided to get a black and white Alaskan Klee Kai called Skye in September 2017.

Copper and Skye both have the same father – a red and white Alaskan Klee Kai – but different mothers.

Unsurprisingly, we haven’t looked back since and enjoying sharing our lives with these two little characters.

I get asked a lot of questions about Skye and Copper – and the rare breed.

So it inspired me to write 10 reasons to love Alaskan Klee Kai.

If you like Alaskan or Siberian Huskies, you’ll love Alaskan Klee Kai. The breed was created in the late 1970s by an American lady called Linda Spurlin. She encountered an undersized Husky called Curious during a trip to Colorado. Spurlin brought the dog back to Alaska and after her unique canine got a lot of attention, she decided to set about recreating her Mini Husky. The United Kennel Club granted Spurlin’s Alaskan Klee Kai status in 1997. The Alaskan Klee Kai was officially recognized by the American Rare Breed Association (ARBA) in 1995. 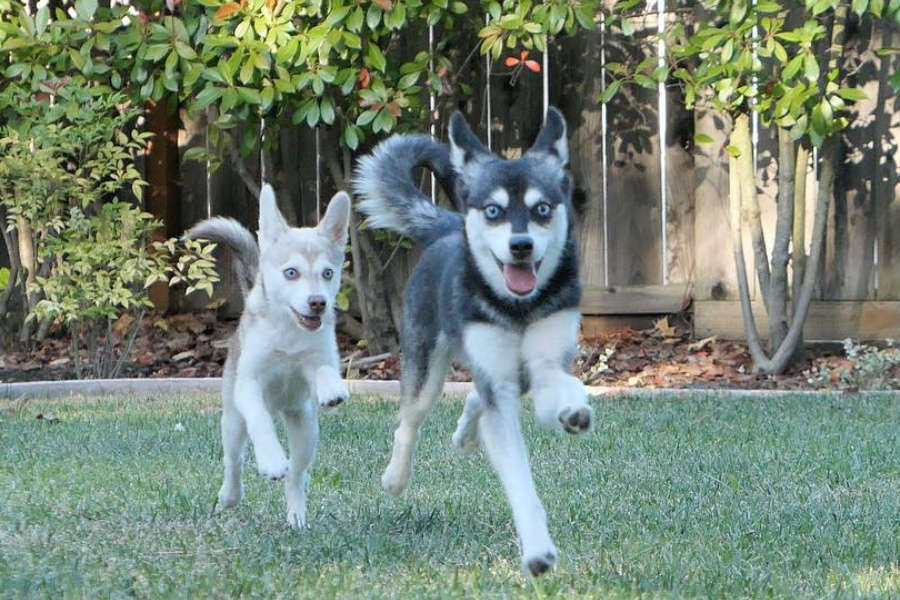 If you live in an apartment and you’re worried that a Siberian Husky isn’t a good fit for your lifestyle, you may want to consider an Alaskan Klee Kai as an alternative. Spurlin used the Alaskan Husky to provide the foundation for her breed. But her initial Klee Kai were created using some Siberian Husky – too. This explains why AKK have some of the same coat and eye colors as their northern ancestors. Alaskan Klee Kai come in three main colors – black and white, gray and white and red and white. You can find AKK in other colors but the United Kennel Club’s breed standard recongises these three shades. Their personalities are similar to Huskies but there are differences too. Alaskan Klee Kai are considered companion sized dogs that come in three different sizes: standard, miniature and toy. Standard Klee Kai are between 15 and 17 inches in size. Miniature Alaskan Klee Kai are between 13 and 17 inches in height. Toy AKK are around 13 inches. These northern dogs are already small but you’ve got the flexibility to select which size is the best fit for your circumstances and lifestyle.

Like a lot of northern or Spitz breeds, Alaskan Klee Kai are talkative little dogs. They like to use their voices to communicate their emotions to their pet parents. Alaskan Klee Kai will usually make a woo-woo sound rather than a traditional barking noise. Their woo-woo voice could denote a happy dog, an excited dog, a threatened dog or an upset dog. As dog owners, you’ll quickly learn which woo-woo sound indicates a specific emotion. Although both of my Alaskan Klee Kai make the woo-woo sound, my younger dog Copper will also howl when we enter or leave the house. Again, this is typical amongst some members of the breed.

In my experience, Alaskan Klee Kai are intelligent dogs. Copper and Skye are reasonably well trained with regards to basic commands and obedience. Copper is more food motivated than Skye so he’s proven an easier student that his older black and white sister. Skye is more independent and stubborn. Sometimes she’ll show an interest in food but on other occasions she simply won’t be bothered. With consistency and patience, you’ll have well-trained pups. They’re also quick to learn how to manipulate you to their advantage. They’re extremely observant dogs that waste no time learning your routine or traits.

Siberian Huskies are known for being sociable dogs that like to interact with humans. That sociable trait makes a lot of sense given these sled dogs served a purpose within the Chukchi tribe in northern Asia. Some Alaskan Klee Kai can be cautious or shy around people that they don’t know. This is a trait that breeders are looking to improve upon by breeding friendly and outgoing AKK. Skye is very sociable – she loves to interact with any visitors that come to our home. For a short time, her parents don’t exist any more! Copper will hang back. Our younger AKK is much more reserved around people he doesn’t know. He isn’t aggressive or unfriendly but he requires some time to warm up to strangers. Having said that, Copper and Skye both enjoy cuddle time. They love nothing more than curling up next to us on the sofa. Given Spurlin wanted to create a companion-sized Husky, this trait shouldn’t come as a surprise. 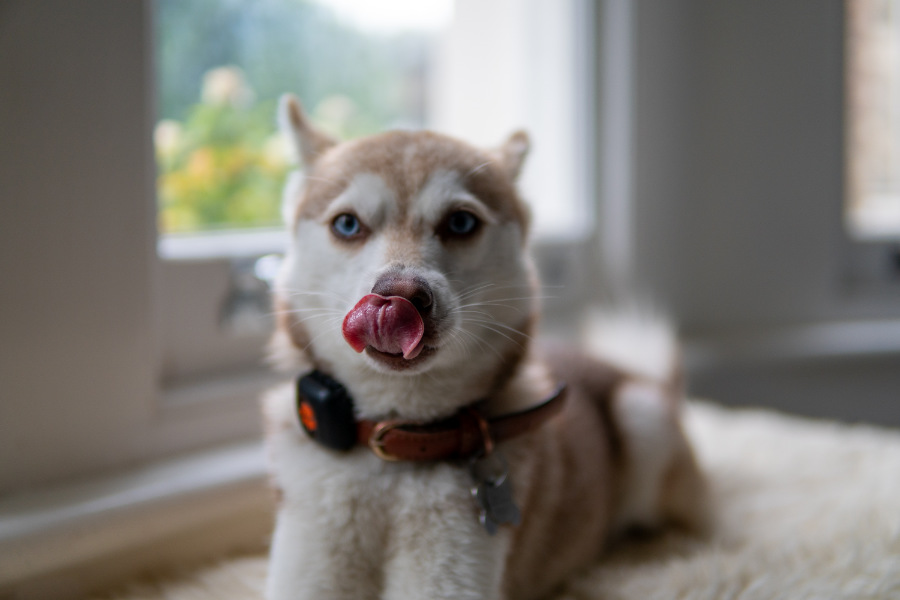 You may think that these small little dogs won’t need a lot of exercise. You’d be wrong – though. Alaskan Klee Kai need around 45 to 60 minutes of exercise a day. This could be in the shape of a walk around the neighborhood, some playtime in the garden or yard, a trip to the dog park or a jog with their owner. Copper and Skye are both very active. We try to walk them twice a day for at least 45 minutes (each walk). They like to go running with me twice a week. We usually aim for around 7km and they barely break a sweat.

Copper and Skye are both very playful dogs. They revel in the chance to play with their toys on our bred. Every day, it’s a different toy that has their focus. When we bring them to the dog park, they’re extremely playful with other dogs, especially Copper. He likes to be chased or do the chasing. Having said that, they’re both young dogs (ages 2 and 18 months) and older Alaskan Klee Kai we’ve met aren’t quite as energetic or playful as my two AKK.

Something you’ll hear some Klee Kai owners say a lot is their dog acts like a cat. I would say Skye is more cat-like than Copper – but both do have some feline tendencies. They love to climb on the back of the sofa or on the top of chairs and look down at us. Our Klee Kai are surprisingly good climbers – we’ve seen Copper climb two trees before we sprinted over the avert potential injury. Skye is an independent thinker. She doesn’t do anything unless she wants to. She doesn’t need to be in our company all the time and we’ll often find her sunbathing in the bedroom. They’re both quite fastidious – too.

Given their size range of 13 to 17 inches, it’s safe to say an Alaskan Klee Kai isn’t going to be a guard dog. However, they make great watch dogs. These Mini Huskies are extremely alert. They’ll bark – or woo-woo – if there is a visitor at the door. If they see something unusual going on outside the window, they’ll let you know about it.

Corgis may have their lovable fluffy Corgi butts and other breeds like to do the sploot booty but the Alaskan Klee Kai have their own trademark move. It’s called the Klee Kai cross paws. If you search Alaskan Klee Kai on Instagram, you’ll almost certainly encounter a photo of an AKK with cross paws. Both Copper and Skye do it – and it’s a little party trick that is guaranteed to put smiles on faces.

How to Positively Train Off Leash Recall